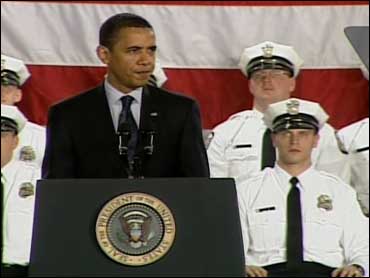 (CBS)
There's one reason above all others that President Obama uses a teleprompter in delivering most of his speeches: he's good at it.

Ronald Reagan was the same way. He was more at ease in reading his speech off the dual screens of a teleprompter than looking up and down at a speech text on his lectern

Not so, George W. Bush. He often got that nervous, deer-in-the-headlights look when giving an address from a teleprompter. He would seem stiff and ill-at-ease. He did not convey a sense of understanding.

"He preferred using large index cards," said his one-time White House Press Secretary Ari Fleisher, "plus I think he was just more comfortable with the cards."

It's definitely a finely honed skill to deliver a speech from a teleprompter (seen in the top right corner of the above picture from Mr. Obama's speech today in Columbus, Ohio). It takes as much if not more focus or concentration than reading a paper copy.

Mr. Obama doesn't always give a flawless teleprompter performance. He'll occasionally stumble on a word or lose his place – but not often. And when the White House provides an advance text and reporters can follow along, Mr. Obama can be seen plowing his way through complicated run-on sentences without hesitation.

Some critics say politicians who rely on teleprompters are more performers than leaders. But that really depends on what the politician says and how he says it. The teleprompter is merely a performance device. It doesn't write the speech or control what is being said.

The danger in teleprompter use is that the speaker will be more focused on reading the words than in conveying a sense of understanding about what he's saying.

Another danger is losing one's place. If the teleprompter goes down or runs amok, every speaker needs to have the text of his remarks in front of him for that contingency.

Some think Mr. Obama may have a problem with that.

"I noticed he doesn't flip pages with his text while using a prompter," said Fleischer, a keen observer of such matters. "He better hope the prompter never fails."

Fleischer recommends that Mr. Obama flip the pages of his paper text as he reads from the teleprompter so that if something goes wrong – his backup is ready to use.