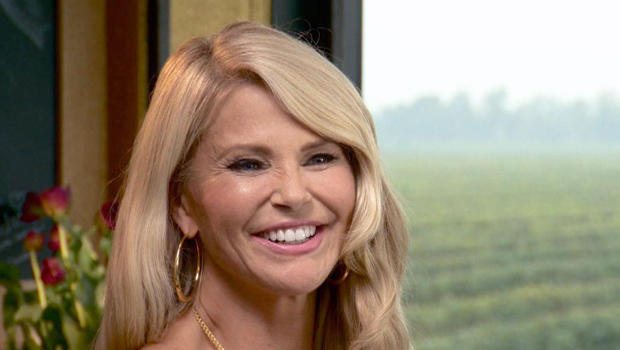 Christie Brinkley is an upbeat advocate for Bellissima, a sparkling wine. Upbeat, and as Mark Phillips discovered, VERY hands on:

No one will ever accuse Brinkley of a lack of enthusiasm.  Now she’s even more motivated.

Bellissima is her very own wine label -- a new range of Prosecco, the Italian fizz that is about the hottest thing in the liquor business right now. U.S. sales are up about a third each year lately.

And Brinkley and her partners think they’ve found a way to break through the market clutter: Her.

Phillips said, “Of all the places I’ve pictured you, the loading dock wasn’t one of them, I gotta say.”

“Oh, believe me, I’m involved in every aspect of this,” she said.

More than four decades into a modeling career, Christie Brinkley never met a camera lens she didn’t like -- and that didn’t like her back.

Prosecco, long a pre-dinner tipple in Italy, is being marketed in the U.S. as a kind of champagne without the pretentions (and without the price tag). More bubbles for the buck.

Phillips asked if she were a Prosecco girl before getting involved in the Prosecco business. “Oh yeah, I’ve had my fair share,” she laughed.

In the Veneto region of Italy, about an hour north of Venice, where anything that calls itself Prosecco has to come from, they can’t make enough of the stuff. (“Everyone wants Prosecco,” Brinkley said.)  If you’re going to get into the wine business, this is the place.

And this is where Brinkley has come.

She’s not only found a wine she likes; Christie Brinkley seems to have found the fountain of youth.  She’s 62 years old now … going on 22 by the look of her.

“You know, I have been around a looooong time,” she said.

It has been 37 years since she became the nation’s pin-up girl, appearing on three consecutive Sports Illustrated Swimsuit Issue covers, from 1979 to 1981 -- the only time anybody’s ever done that.

And her life has been like a timeline of the Boomer Generation, if a little more glamorous.  Not everybody has a pop-star husband in whose music video you can more or less play yourself.

Billy Joel, of “Uptown Girl” fame, was one of four husbands and four divorces -- two good, two bad, she says. There were three children along the way.

It’s been a life of mostly highs and some significant lows, from her family’s beginnings in Michigan, to surfer-girl California, to an art student’s life in Paris where she was discovered in a post office, the legend goes.

“I never really wanted to be a model. That was never a dream of mine,” she said. “And I was a little embarrassed. But I needed the money!

Whenever she’s been counted out, she’s always seems to bounce back -- never with a higher, or perhaps more unlikely, rebound than when she was asked to play Roxi Hart in the long-running musical, “Chicago.” The reviews, like her marriages, were mixed. But it jump-started her career once again.

“I never felt like I retired,” she said. “I always get a little bit insulted when I read ‘former model.’ And I’m like, ‘Former?’ What do they think I’ve been doing all this time? I’m still here. I haven’t gone anywhere!”

Christie has used her fame in product promotion before. There’s the skin care line, and gym equipment.

And in keeping with the always-look-your-best theme, her fans may be pleased to know the new Prosecco range is organic, and includes a sugar-free option. “It’s zero sugar, it’s zero carbs. This is safe for people with diabetes, for people on a diet,” she said.

What the world needs: Diet Prosecco. Down the hatch!

And if anybody thinks Brinkley’s new line is a way of toasting the end of her career, toast again: “If people are hoping to send me off with a bottle of champagne, bottle of my Prosecco, like, pop that cork and say, ‘Yay, she’s retired.’ That’s not gonna happen right away!” she laughed.