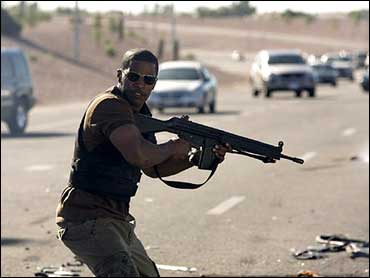 Journalism giant David Halberstam died in a car accident in April. This week, remember his life and his immense talent with his latest book, "The Coldest Winter."

"Feast of Love" is directed by multiple Academy Award-winning director Robert Benton and has venerable ensemble cast including Greg Kinnear, Selma Blair and Jane Alexander. All the character's stories intertwine in a romantic tale.

"The Game Plan" is a family comedy starring Dwayne "The Rock" Johnson, as a top professional quarterback who, all of a sudden, learns that he is a father.

Tony Bennett "Sings the Ultimate American Songbook, Vol. 1" features 15 of the most popular songs of all time, including songs by Cole Porter and George Gershwin.

Photos: A Salute To Tony Bennett

The Dave Grohl-lead Foo Fighters rock out on their new album, "Echoes, Silence, Patience and Grace".

Hosted by film critic Richard Roeper, "Starz Inside" on the Starz network kicks off with "Fog City Mavericks: The Filmmakers of San Francisco," which looks at biggies in the film biz who call the Bay Area home. They include George Lucas, Francis Ford Coppola and Clint Eastwood. It premieres at 9 p.m. Monday.

Former President Clinton is scheduled to appear on "The Martha Stewart Show" for the full hour of her syndicated talk show on Wednesday (check local listings).

"Playing for Pizza" by John Grisham is a tale of a replacement quarterback who cost his team the AFC championship but finds a second chance after his professional football career goes belly up.

"The Choice" by Nicholas Sparks, is about how unexpected decisions affect our lives.

"The Coldest Winter: America and the Korean War" by late, great journalist David Halberstam, brings the characters of the conflict -- President Truman, Chairman Mao and George Kennan -- to life.

"Run" by Ann Patchett is the story of two families brought together by a tragic car accident.

"Knocked Up" stars Seth Rogen and Katherine Heigl. The two have a one-night stand that results in a pregnancy and they decide to take a shot at a relationship.

"Next" starring Nicolas Cage, Julianne Moore and Jessica Biel, is about a man who can see the future and change the outcome of events.

"Bug" stars Ashely Judd and is directed by Oscar-winning director William Friedkin. It's an adaptation of the chilling off-Broadway play by Tracy Letts.

"Dividing the Estate" starts Sept. 27 at the Off Broadway 59E59 Theaters. The 13-character play is written by Horton Foote, considered by some to be America's Chekov.