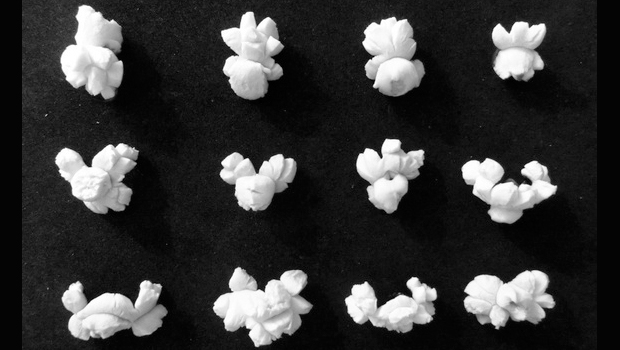 Believe it or not, the science behind popcorn's popping may be akin to an Olympic event: Researchers have found that popcorn kernels accomplish their acrobatic feats like somersaulting gymnasts who push off with their legs before launching themselves into a spin.

The study, which relied on high-speed video, also suggests that the characteristic "pop" sound of popcorn does not come from the foamy interior bursting through the kernel's exterior, as some people might think. Instead, water vapor released from the kernel creates tiny resonant cavities inside the kernel, sending out a "pop." [9 Snack Foods: Healthy or Not?]

Zea mays everta is the only kind of corn that consistently pops and, as such, is used as popcorn. Each kernel contains a tiny bit of water surrounded by starch. As the kernel heats up, the water vapor expands, turns into steam and heats the surrounding starch into a gooey mess. At a high enough pressure, the starch goop bursts through the shell and then cools down quickly into the fluffy popcorn shapes. Past research has found that the outside of the kernel has to be stronger and better sealed than other corn variants to generate large pressures and high "popability."

Industry experts have long tinkered with the formula for perfect popcorn. For instance, popcorn manufacturers have determined that popcorn kernels should contain between 13 and 14.5 percent moisture, said study co-author Emmanuel Virot, a doctoral candidate in mechanics at the École Polytechnique in Paris. But scientists have spent less time than those involved in the industry studying the tasty snack.

Virot and his colleague Alexandre Ponomarenko, a researcher at the CNRS in Grenoble, France, were using a high-speed camera to understand why tree limbs break at certain wind speeds. On a whim, they decided to turn the lens toward another topic.

"We decided to make a movie of exploding popcorn," Virot told Live Science. "Then, we discovered there are some interesting properties and biomechanics, so we continued to do it as a hobby." [Watch the Exploding Popcorn]

The researchers put some microwavable popcorn on a hot plate and ramped up the temperature in increments. Then, they used the video camera to capture the kernels' motion.

Although just 34 percent of the kernels popped at 338 degrees Fahrenheit (170 degrees Celsius), about 96 percent popped when temperatures got just a little higher, to 356 F (180 C). To understand why that was the case, the team measured the ultimate strength of the outer hull of the popcorn, as well as the radius of the kernel before and after its explosion. By combining these measurements in a simple mathematical equation, they calculated the pressure the kernel could withstand before popping.

The fracture point was highly dependent on temperature, but only slightly dependent on other features, such as kernel geometry, the researchers found.

Next, the team wanted to investigate why popcorn makes a popping noise. By looking at the footage and using a microphone to capture the pops, the team found that the pop sounds didn't happen when the hull first split. Instead, the pop seemed to occur when water vapor inside the kernel was released, creating empty cavities inside the popcorn kernel that resonated once the pressure dropped. Similar phenomena occur when volcanoes or champagne corks pop, the researchers wrote today (Feb. 10) in the Journal of the Royal Society Interface.

The team also found that popcorn uses a similar method to do its acrobatic flips as gymnasts use to fly through the air. As the fluffy insides penetrate the outer shell, a tiny "leg" of starch is formed that pushes against the bottom of the pan.

This starchy leg acts as a kind of springboard that launches the popcorn up to 0.4 inches (1 centimeters) into the air as it somersaults, the researchers found.

The findings are unlikely to settle the debate over how to make the perfect batch of popcorn.

However, the new insights do suggest that getting the kernels to reach a uniform, high enough temperature is key to popping them all, Virot said.

As for the bane of popcorn lovers everywhere -- unpopped kernels -- those may be caused by defects in the hull, which prevent high pressures inside the kernel. Kernels that sit too long at the bottom of the pan could also get burn spots that could pierce the hull, preventing the high pressures needed to pop open the kernel, Virot added.