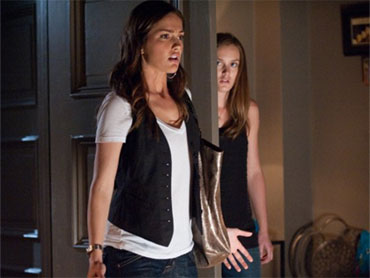 LOS ANGELES -- The college thriller "The Roommate" moved into the top spot at the box office with a $15.6 million debut during a typically slow Super Bowl weekend in which the National Football League championship game preoccupied movie fans.

The Sony release features Leighton Meester as a psycho freshman who becomes obsessed with her new roommate (Minka Kelly).

Released by Universal, "Sanctum" is a survival story about explorers trapped underground in flooded caves during a monster storm.

Revenue estimates were off sharply on Sunday as football fans gave movies a pass in favor of the big game. Even without the Super Bowl, though, it was another sleepy weekend at theaters, with overall business down for the 13th-straight weekend compared to last year, when Cameron's 3-D sensation "Avatar" still was riding high.

"I think Hollywood would be crying right now were it not for the 'Avatar' excuse. It really was an anomaly how well that film was doing in January and February last year," said Paul Dergarabedian, analyst for box-office tracker Hollywood.com.

This weekend's receipts came in at $86 million, down 25 percent from the same weekend in 2010, according to Hollywood.com. A year ago, the weekend was led by "Dear John" in first-place with $30.5 million and "Avatar" in second with $22.9 million, a huge number for a film that already had been in theaters for nearly two months.

Largely because of "Avatar," overall revenues so far this year are running 24 percent behind 2010's.

Still, Sony was happy with the results for "The Roommate," which nearly earned back its $16 million production budget over its opening weekend.

Though trashed by critics, the movie gave room for a showy performance from "Gossip Girl" co-star Meester as the wacko roommate.

"She really goes for it," said Rory Bruer, Sony's head of distribution. "Crazy and beautiful. It kind of works for her."

"Sanctum" brought in spare change compared to the billions of "Avatar," though its opening weekend went a long way toward recouping the $12 million that Universal and partner Relativity Media paid for its distribution rights.

And the studio was happy to be in business with Cameron, a pioneer in digital 3-D production.

"Anybody working with this man, you have to revel in the opportunity," said Nikki Rocco, head of distribution for Universal.

While Hollywood is off to a slow start in 2011, the industry still could have a record year for revenue once a huge lineup of late-spring and summer blockbusters arrive, Dergarabedian said.

Last year was front-loaded with "Avatar," but business slowed through much of the summer and fall.