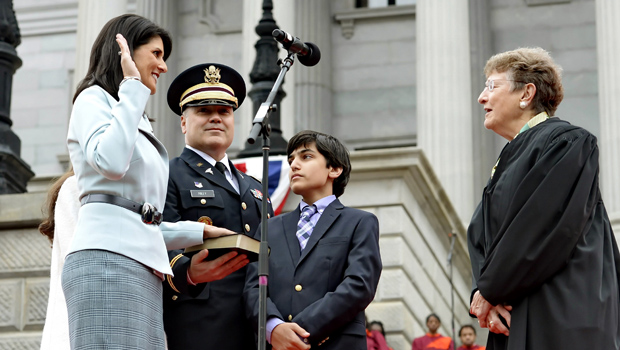 We don't hear very much about the FIRST GENTLEMEN of American politics -- certainly, not as much as we hear about our First Ladies. But come November, that could change. Our Sunday Morning Cover Story is from Faith Salie:

"The other day I was out there, you know, cutting the hedges and cleaning," he told Salie. "And some guy came by and he said, 'Hey, hey, does the governor live here?' And I said, 'Yeah.' And he said, '"Well, if you see her, tell her she's doin' a great job!'"

It's pretty easy for Moffit to get an audience with the governor of Rhode Island, considering he's married to her. Gina Raimondo is the first female governor of the state, which makes her husband the first ... what?

"I do remember being at an event where there was a group of seniors, and the man who was introducing me sort of paused," Moffit recalled. "He said, 'This is Andy. He's -- what, what's your title again?' And I explained, 'First gentleman.' And all the older men and all the women there all laughed and kind of giggled."

Andy Moffit is Rhode Island's first "first gentleman." While that title may not exactly roll off the tongue, you might want to get used to it.

There are now SIX first gentlemen in the United States, from Michael Haley in South Carolina, to Dan Little of Oregon.

And while we don't know if the title of the cook book by Wade Christensen, the first gentleman of Oklahoma ("Getting Grilled") sums up his take on the job, Dan Mulhern, former first gentleman of Michigan, says the role reversal can be humbling. His wife, Jennifer Granholm, served two terms as governor.

In fact, Mulhern -- a lawyer and teacher at UC Berkeley -- had always wanted to run for public office himself, but it was during his wife's first campaign as Attorney General that his role began to change.

"She gave a big speech at the convention, 3,000 people packed in," he recalled. "And she was amazing. And I was holding my son, and this horrific smell starts wafting up to me from his backside. And so I was on the floor in a bathroom stall with my son on a plastic diaper pad changing him. And I was just fussin' like crazy with myself: 'I can't believe I'm here. Why am I here? I can't believe I'm doing this now!'"

During his wife's first term, Mulhern sought advice from -- who else? -- a former Michigan first lady, Paula Blanchard. He recalled asking her, "How did you decide what role you would play?' And she said, "Your primary role is emotional."

"And what did that mean?" Salie asked.

"It meant a lot things: number one, it meant I was the lead in the family. At that time our children were eight, seven and one.

Dolley Madison established the White House as a backdrop for social diplomacy. She also knew how to pack up and move in a hurry.

"Dolley Madison, when the White House was burned by the British in 1814, managed to save it," Graddy said.

A century and a half later, Jacqueline Kennedy reigned domestic, famously restoring her new home.

Lady Bird Johnson was the first to enter the job with an announced slate of programs, including highway beautification.

Our more recent first ladies have taken on health care, literacy, and obesity.

Salie asked, "How much of what we expect of first ladies and of a first gentleman has to do with our expectations of gender?"

"I think almost all of it has to do with our expectations of gender!" Graddy replied. "I don't think that people are necessarily going to expect a first gentleman to do the Christmas decoration tour, but we just don't know."

"But maybe we should?"

"I realize I have a platform as first gentleman," Moffit said. "And I've a real license, and I have an intention to do something with it to make an impact on our state. And they were very encouraging in that way."

These days, while his wife is at the State House, Moffit is focusing on his causes: food and hunger issues. That is, when he's not working for a management consulting firm.

Which brings us to President Bill Clinton, who may soon find himself with a wife who's president, and a case of serious role reversal.

"You don't make the decisions; your wife makes the decisions," said Mulhern. "You're a coach or a consultant. You're a supporter. You're a cheerleader. You're an encourager. But keep that clear in your mind: She's the boss."

Still, to hear Mulhern tell it, there's nothing second-rate about being first gentleman.

Salie asked, "If you had to assign adjectives -- 'My years as first gentleman were ...' -- what would you say?"