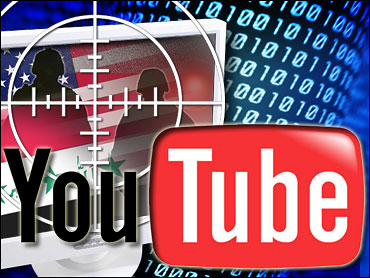 This column was written by Wes Enzinna.


With top-ranked titles like "Dancing Hamster Man," "The Shining: Trailer Mash Up" and "Monsters Are Waiting — Ha-Ha," you'd think YouTube is all spoofs and stupid pet tricks. But things can get serious fast at the video-sharing Web site. Consider "Give Peace a Chance — Tacoma Police Riot", a raw and dramatic documentary of recent clashes between police and antiwar activists in Washington State. Viewed by more than 100,000 people to date, this and other protest videos from Tacoma are proof that YouTube is good for more than pranks and soft porn. Peace activists are leveraging the site to reach new audiences and counter bias of their actions in mainstream media.

The video, shot March 9, begins peacefully enough, panning over protesters clustered near the Tacoma waterfront, singing the John Lennon anthem the title evokes. But soon, clouds of pepper spray and tear gas and the sound of gunshots fill the air, as police fire rubber bullets to disperse the crowd. As panicked protesters begin to flee, an angry voice off-camera repeatedly screams at the police, "What the f--k are you doing? What the f--k are you doing?" A second, more explosive video posted on YouTube shows another clash, with police firing more rubber bullets and an angry crowd chanting, "Shame on you! Shame on you!"

The two-week protest, which began March 2, was organized by the Tacoma Port Militarization Resistance — a coalition of groups including local chapters of Students for a Democratic Society and the Olympia Movement for Justice and Peace — aimed to stop the shipment of around 300 Stryker combat armored vehicles destined for Iraq, as part of President Bush's troops buildup. When the shipment left port March 13, protesters staged a final action, then called it quits. In all, thirty-seven people were arrested.

This was not the first time antiwar groups in the Northwest have employed this tactic, but it was the first time YouTube was part of the scenario. In May 2006, hundreds of protesters gathered in nearby Olympia, Washington, and more than thirty were arrested — while attempting to stop a previous shipment of Stryker vehicles from leaving the city's port. The protests drew national media attention. And while activists failed to halt the shipment, they were encouraged enough to stage a similar action in Tacoma.

Filming under the YouTube pseudonym "Acumensch" was Joe La Sac, a student at the University of Puget Sound and a Tacoma SDS member. "It was frightening when the police attacked us," La Sac says. "But the drama actually started a couple days earlier," on March 6.

That day, La Sac went down to the Tacoma port with his XL2 Digital Camcorder. "I didn't go to protest — there was nobody there, I was alone," recalls La Sac. "I just wanted to film the Strykers."

While La Sac was filming the Strykers, eight police officers appeared and questioned him. When he explained he was filming for an independent news organization, an officer told him to leave the premises. But before La Sac could leave, he was handcuffed and detained by the officers.

During the encounter, La Sac's camera continued recording, and when La Sac was released from police custody, the first thing he did was edit the footage, add opinionated comments about police harassment and censorship, and post it on YouTube with the title "Film Is Not a Crime". "The whole thing took me less than two hours to edit and post," says La Sac. "I didn't think it would get that much exposure."

But it did. "Film Is Not a Crime" was up for barely twenty-four hours before La Sac was contacted by Seattle's King 5 TV, which broadcast an interview, which is also posted on YouTube. The Tacoma News Tribune ran a news story on the young videographer and the alleged police harassment. La Sac says other television stations contacted him for interviews as well, but he had agreed to do an exclusive interview with King 5, which aired his footage repeatedly throughout the weekend.

By the end of the week, the number of YouTube videos posted by various participants had multiplied, even including an impromptu interview with a Tacoma policeman. In turn, much of this footage was picked up and broadcast by local stations, reaching TV viewers as far away as Northern California, Oregon and Idaho.

"YouTube helped us spread our message about the war, and why we're opposed to it," says T.J. Johnson, an Olympia City councilman and antiwar activist who was arrested at the Port of Tacoma March 9. "We're getting people watching and hearing about our struggle who wouldn't have otherwise."

But not everyone who viewed the YouTube videos was sympathetic. Conservative syndicated columnist Michelle Malkin wrote on March 10 that "members of the anti-military mob shouted condescendingly at our volunteer soldiers...the same ilk that purport to care so much about the troops not having enough armor and protection stood and jeered at those deploying to bring more protection to their fellow soldiers in Iraq."

Patrick Edelbacher, a member of Tacoma SDS, disagrees with Malkin's interpretation. "The Strykers are being shipped for soldiers who aren't in Iraq yet — the soldiers from the 4th Brigade are being forced to skip final training to go to Iraq as part of Bush's 'surge' and are being sent ahead of schedule," he said. "But while viewpoints [like Malkin's] get a lot of airtime, ours doesn't. This is where YouTube comes in."

There's nothing inherently progressive about YouTube, which was recently purchased by Google for $1.76 billion. But the wide distribution of La Sac's video is evidence of the potential for new technology to be an agent of change — as Ani DiFranco sings, "[Every] tool is a weapon if you hold it right."
By Wes Enzinna
Reprinted with permission from the The Nation