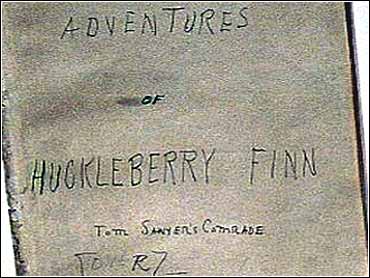 This summer, a new book continues the adventures of "The Adventures of Huckleberry Finn."

An edition of the classic novel has just been released by the Mark Twain Project at the University of California Press at Berkeley. Based on Twain's long-lost original manuscript, the book contains numerous minor alterations and a ghost story told by the runaway slave Jim.

"We're trying to get the book as close as possible to how Twain would have wanted it," says the project's general editor, Robert H. Hirst.

The Berkeley editors aren't the first to say this, and probably won't be the last. Like rival explorers in search of a promised land, publishers keep on issuing new editions of Twain's novel, with each supposedly nearing the elusive, but irresistible claim to the "definitive" text.

"When we say authoritative, we mean as authoritative as you can be at the time," Hirst explains. "In the previous edition, we only had half of the original manuscript. This time, we had the whole text."

The Random House version, published in 1996, and the current Berkeley edition use the same rediscovered material, but in different ways. Random House, for example, places Jim's ghost story in the actual narrative. Berkeley sets it aside in the appendix.

"If we thought he had been forced to remove it, we would have kept it in the body of the text," Hirst says. "But from what we can tell, he decided the story didn't work."

"We thought it was interesting to put the story where it would have gone in the text," says Daniel Menaker, senior literary editor at Random House. "I have no problem with the decision made by the Berkeley press, but our feelin was to not to make our readers wait for the small print in the back to see the new material."

Re-editing old literature is a long, difficult tradition. As with "The Canterbury Tales," "Ulysses" and many other works, no definitive version of "Huckleberry Finn" exists. No one knows exactly what Twain wanted, what his editor wanted and what was changed by accident.

There are two major reasons. One is Twain's slangy narrative, which challenged typesetters to decide whether the author had made a mistake in grammar or spelling, or whether that was simply Huck Finn's way of expressing himself.

"They don't make a very great many mistakes," Twain complained of the typesetters, "but those that do occur are of a nature to make a man curse his teeth loose."

Hirst cites as an example the word "ax." Twain spelled it "axe" in his manuscript, but the "e" was later dropped. Convinced that a typesetter had erred, Hirst says the original spelling is used in the current Berkeley text.

The second problem concerns the actual manuscript, which was separated in two and then lost.

Twain, who had lived briefly in Buffalo, N.Y., donated the second half of the manuscript to the local library, now called the Buffalo and Erie County Public Library. The manuscript was sent in 1885, shortly after the novel was published, in response to a request from library curator James Fraser Gluck.

The first half, believed destroyed at the printer, turned up a couple of years later, and Twain sent it on to Gluck, who apparently kept it at his home.

When Gluck died suddenly at age 45, the first half of the manuscript disappeared among his papers and was believed lost.

In 1990, it turned up in an attic trunk at the California home of one of Gluck's two granddaughters, who put it up for sale through Sotheby's auction house.

The library sued to retrieve it, claiming ownership because Twain had intended to donate the manuscript to the library, not Gluck himself. The lawsuit was settled in 1992, with the Gluck family agreeing to turn over the manuscript in return for a portion of the income earned from its publication.

Only in 1995 were the halves officially reunited, as the centerpiece of the library's Mark Twain Room. And the manuscript is technically just an early draft. The whereabouts of the actual proofs sent to the typesetter remain unknown.

"I don't think we'll ever have a definitive version unless someone finds that typescript," Hirst says.

Meanwhile, with thousands of students assigned the novel each year, editions have proliferated. The copyright of the version first released has long expired and a number of major publishers, along with a lot of minor ones, have issued "Huckleberry Finn."

It's questionable whether nonacademic publishers will use the new material, which the Twain estate has copyrighted. Not only would they need permission, but the commercial appeal seems limited. Menaker, who declined to give exact figures, says te Random House text could have "sold better" and that teachers apparently didn't want to switch.

Others in publishing indicated they would also stick with the old text.

"I'm interested in the original manuscript, but I frankly think the material Twain left out, he left out wisely," says John Seelye, editor of the Penguin Classics edition.

"Besides, I don't see anything wrong with having different versions out. This is a democracy, isn't it?"

By Hillel Italie
© MMI The Associated Press. All Rights Reserved. This material may not be published, broadcast, rewritten, or redistributed