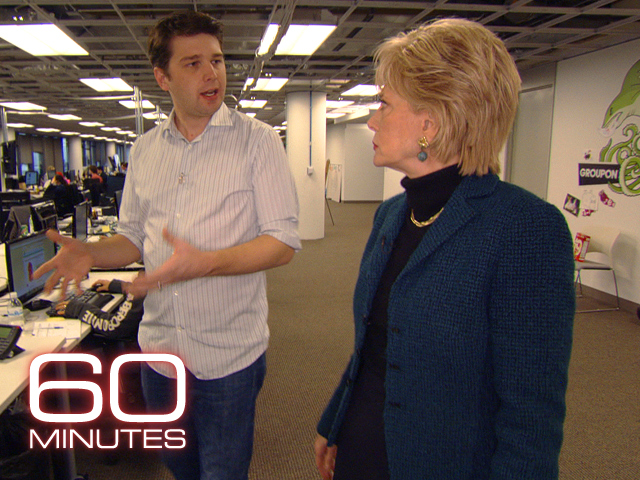 Will Groupon revolutionize how we shop, or is it just a passing fad? Lesley Stahl sits down with the company's unorthodox founder, Andrew Mason. In his first major interview since taking Groupon public, Mason tells her: "I think the big thing about Groupon is just people had never seen anything grow quite so fast." In fact, Forbes has called it the fastest growing company ever. Will that continue now that Groupon has competition from the likes of Google and Amazon?

The following script is from "Groupon" which aired on Jan. 15, 2012. Lesley Stahl is the correspondent. Shachar Bar-On, producer.

By now you have probably heard of the company called Groupon even though it started only three years ago as a side project of a quirky young Midwesterner. What he did was reinvent the coupon, turning it into a digital tool for bargain-hunting at your neighborhood stores. The company took off, almost overnight. It's global now, raking in hundreds of million of dollars a month.

Groupon: The next Amazon or another Myspace?
Groupon grew from a simple idea to a $15 billion company in just three years. But will it last?

Wall Street took notice: This past November, Groupon had the biggest initial public stock offering, or IPO, of any Internet company since Google. The company's worth jumped to an unexpected $18 billion on the first day of trading. And yet Groupon is the subject of a fierce debate: Will it revolutionize how we shop in the long run or just end up a passing fad?

The answer depends in part on the 31-year-old who came up with the idea: Groupon's founder and CEO Andrew Mason.

Lesley Stahl: What is a Groupon?

Andrew Mason: A Groupon is, essentially, a voucher that's worth money that you can take into a business and use like cash. When you subscribe and you get these emails every day, it's a great way to explore your city and find out about really cool, local things to do.

The deals are at least 50 percent off. So, for example, a $40 meal for a $20 coupon, or a half-off hot air balloon ride. Groupon has 150 million subscribers who get a daily email with deal offers from local businesses.

Stahl: Is it usually for something that we don't really need?

The company began in 2008 at the height of the recession, when everyone was looking for a bargain and then it grew so quickly, so fast it took everyone by surprise; including Andrew Mason.

Mason: Once we started Groupon, the success was intoxicating. And it was just this rocket ship ride that you couldn't let go. But you didn't want to let go either.

Not only did Mason launch a retail revolution, he brought the company to a place where, in this economy, they hire up to 150 new employees a week.

Stahl: How many people work for Groupon?

[Salesperson: Hi this is Sadie, calling with Groupon.]

Unlike most dot com rocket ships, Groupon looks like a real business. Where most websites rely on algorithms, Groupon relies on actual human beings.

What these human beings, the salespeople, do is think up deal ideas - then convince local merchants to offer them at half price.

[Salesperson: So what we're going to do is actually customize a deal specifically to you.]

Groupon has found out by trial and error how to present its deals. Used to be male and female subscribers got the same emails every day. Now Groupon is tailoring its offers by age and gender.

Mason: Yeah, it turns out that guys don't like deals on laser hair removal or pole dancing lessons.

The merchants don't necessarily make money; the offers are half-priced to begin with and Groupon takes nearly 50 percent of that. But it's a marketing tool that gets lots of people in the door. When the Shedd Aquarium in Chicago ran a Groupon, 14,000 people showed up. It's a group coupon. A Groupon!

Stahl: What you did was you took a spam business, a junk mail business, and somehow made it entertaining and cool.

Mason: We do realize that we're sending people an email every single day, and that could get annoying. So there's gotta be something else there that keeps you engaged and keeps you from un-subscribing.

That something is the absurdist humor in the daily deal write-ups. Four hundred writers and editors - more than most newsrooms - come up with hundreds of these pitches a day, with twists of phrases and logic. Here's one for a dentist: "Humans developed smiles as a way to deflect predators in the wild and former bosses in the grocery store."

The loopy write-ups give Groupon its personality, which seems to seep down from the very top. Andrew Mason is known as a little whacky himself. As a gag, his executive washroom is a port-o-potty. And look at this:

Stahl: Can you name another CEO with a demo on YouTube in which you're sitting around in front of a Christmas tree in your skivvies doing yoga?

The problem is that he now runs a huge company. And his urge to be goofy makes him one of the most unlikely corporate CEOs you'll ever meet.

Mason: I think if there's any difference between me and a traditional CEO, it's that I've been unwilling to change myself or shape my personality around what's expected.

Stahl: So here's a question that you hear a lot: "Is Andrew Mason ready to be a CEO?"

Mason: Am I as experienced or mature or smart as other CEOs?

Stahl: -- of big companies worth as much as yours.

Mason: Yeah. No, probably not. But there's something, I think, very useful about having a founder as the CEO.

According to Forbes Magazine, it's so useful Groupon is the fastest growing company ever. Enter their offices and there's the Forbes cover. But it's surrounded by other covers of hi-tech has-beens, as if they're asking themselves: "Could we be the next to fall by the wayside?" It's a good question.

Andrew Ross Sorkin: Well, the greatest challenge to their business is that it's unclear that it's defensible.

Andrew Ross Sorkin, financial columnist for the New York Times and host at CNBC, says the biggest downside is how easy the model is to replicate.

Sorkin: Google is getting into this business.

Stahl: Giants. But what Andrew Mason will tell you is that so far, they've killed them all off. So far.

Sorkin: So far they have spent an extraordinary amount of money to market their business so that they've been able to beat back a lot of the competition.

Sorkin: The question is if you're spending as much money as they are, whether you can actually create a profit long term.

That's given rise to doubts about the very sustainability of the company. For one, they spend more money than they take in on such things as wooing new subscribers and it's expensive to employ 10,000 people. By contrast, Facebook has less than 3,000.

Sorkin: At the moment, they have yet to turn a profit.

Stahl: They've yet to turn a profit, at all.

[Salesperson: Hi, thanks for calling Groupon. This is Bethany. How can I help you?]

Add to that horror stories from merchants, like the baker who made 102,000 cupcakes for all the Groupon buyers, but with the steep markdowns, she lost $20,000. And businesses complain Groupon customers come once and never want to pay full price again.

[Salesperson: Ok, I'm sorry about that.]

But Mason was still the new Boy Wonder until the summer, when he decided to make Groupon a publicly traded company and it had to open its books. What raised eyebrows were the accounting tricks that made their huge marketing costs disappear on paper. And they also double counted how much money they were bringing in. So on their books they made $60 million in 2010, when in reality they lost $420 million. Analysts began calling Groupon "unviable," "a Ponzi scheme," and wondered if any grownups were minding the store.

Stahl: But it really hurt you. It looked as though something was fishy.

Mason: I think the big thing about Groupon is just people had never seen anything grow quite so fast. And that made people want to dig in and be skeptical. And--

Stahl: No, but you contributed to it. You didn't put the honest revenue figure down, you left out marketing costs. It just-- it seemed like a bush-league mistake.

Mason: I don't think it's fair to say that it wasn't an honest revenue figure. And a bush-league mistake that our auditors looked at and thought was like-- smart people can get this stuff wrong. We're inventing a new industry. Like, if we were smart, evil people, we would be more cunning and subtle in our evil ways. You know?

At the time, Mason couldn't address the mounting criticism because companies are prohibited from giving interviews in the lead up to going public. But his impatience drove him to do something that drew the wrath of the regulators: He answered the criticisms in an internal memo to his 10,000 employees. And sure enough it leaked.

Stahl: Here's some of the adjectives that were used to describe you when that memo leaked: Thin-skinned, impetuous and childish.

Mason: Look, I'm not going to pretend like it's been fun to sit here and have something that we've poured our hearts into over the last three years and see it criticized while we have our mouths taped shut. It's kind of like we've now been hazed, you know? We've now-- we're like Wolverine and our skin has been melted off. We've had Adamantium fused onto our bones. And it's made the culture stronger as a result.

I'm not sure what that means, but Groupon ended up having a wildly successful opening day trading on Nasdaq as a public company.

Stahl: On the first trading day, your personal worth jumped to $1.3 billion.

Stahl: Are you checking the stock price every minute? Come on? How often?

Mason: I checked it once yesterday afternoon. And then, I felt dirty and I haven't checked it again since. Do you know?

Mason: Now I want to know. How's it doing?

Well, it's been zigzagging just above and below the initial trading price.

Mason continues to expand the company. He showed me how he's moving deals onto mobile devices.

But the questions remain: Will Groupon become part of our lives like Google and Amazon or will it be relegated to the dot com dustbin? And will the founder have to tone it down?

Stahl: I saw you at Nasdaq, I guess it was, and there you were in this Armani kind of suit and a tie. Completely shaved.

Stahl: A really nice suit, an expensive suit. Was that the first tie you ever owned? Do you even own a tie? Did you rent a tie?

Mason: No. I own over four ties. Yeah.

Stahl: Did you think about showing up in a suit and tie for "60 Minutes"?

Mason: No, I asked if I should.

Mason: And they said I shouldn't. So maybe, you know what? Maybe I am changing. Cause I might've not asked before.