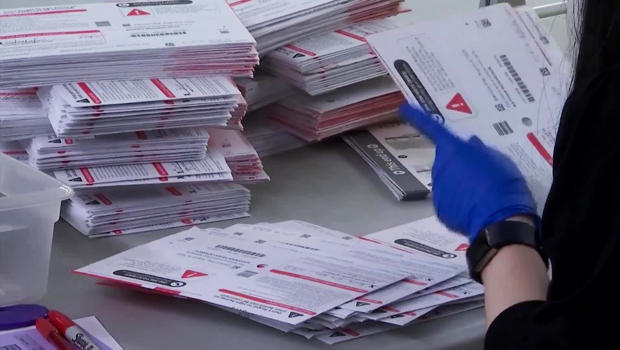 For nearly 50 years, Kevin Runbeck's company, Runbeck Election Services in Phoenix, has helped Americans elect their leaders, from supplying software and voting equipment to many states, to actually counting the ballots in Maricopa County, Arizona.

But this year, Runbeck can barely keep up with demand.

Correspondent Erin Moriarty asked, "Is it fair to say that business is booming for you?"

"We have been getting more and more calls from counties across the county that need help," Runbeck replied. "And we are literally, at this point, sold out."

Long lines in the midst of a pandemic, at primaries in Wisconsin, in Georgia, and at a Texas runoff election last month, have created an unprecedented call for mail-in ballots for this fall's general election.

Voter Michael Harris said, "My preference would certainly be a mail-in ballot. I certainly do not feel comfortable. But I felt compelled to come and exercise my right to vote."

Mail-in ballots are nothing new. During the Civil War, soldiers were allowed to use them to choose the president, helping to re-elect Abraham Lincoln in 1864. By the 2016 Presidential election, nearly a quarter of all ballots cast were either absentee ballots (which you have to request) or mail-in ballots (which in most states are offered to all registered voters).

While there's no evidence that mail-in ballots benefit one party over the other, President Donald Trump has led a very vocal effort to discredit the system, declaring that mail-in voting opens the door to, in his words, "tremendous corruption."

And he has repeatedly slammed mail-in ballots on social media, claiming that the use of universal mail-in voting would make the 2020 election "the most INACCURATE & FRAUDULENT Election in history."

But according to Republican Kim Wyman, the Secretary of State in Washington (one of five states that currently conduct elections entirely by mail), the president's claim that an election with vote-by-mail is fraudulent "is just patently false.

"What we found is our voters really do like it. Our voters like the convenience, 'cause they can vote on their terms and on their time," Wyman said.

Mail-in ballots are sent to all registered voters in Washington State. Once a ballot is completed, it's placed inside a security packet, which is then sent back, either through the Postal Service or after being placed in a special ballot box.

Wyman said, "I think the election system is a lot like banking. You build in a lot of security and controls to prevent fraud. But ultimately, if someone wants to try to cheat, they can."

And, Wyman admits, it has happened in her state. During the 2018 election there were 142 cases of people accused of voting twice or mailing in a dead person's ballot. But, she pointed out, while 142 is a high number of fraudulent ballots, that is out of a total 3.2 million ballots cast (about 0.004%). "I think most banks would kill to have that level of fraud rate!" she said.

As for foreign governments flooding the system with fake ballots? Completed ballots are sorted by machine and must have a certain uniform weight; if they don't, and if the signature and bar code don't match the registered voter, then the ballot is rejected, to be analyzed by poll workers.

Runbeck said, "If somebody tries, we're going to catch them. And there's going to be an investigation. And we're going to figure out which ballot's good and which one's not, and only count the good ballots."

But even when there isn't fraud, there are mistakes that result in rejected ballots. And in Florida's March primary, more than 18,000 ballots were not counted because they arrived after Election Day.

"There are numerous problems; it's everything from fraud to problems with the Postal Service," said Hans von Spakovsky, with the conservative Heritage Foundation, who is against mail in voting in part because, he said, voters (particularly older ones)  could be more easily pressured in their homes to vote a certain way.

"You are much safer voting in person in your polling place to ensure that your vote is going to get counted than you are voting at home where you can be pressured, coerced, or your ballot may not get delivered in time by the U.S. Postal Service," von Spakovsky said.

But if they can't vote at home during a pandemic, they may choose not to vote at all.

Celina Stewart, director of advocacy and litigation for the League of Women Voters, said the most important thing is that voters are enfranchised for November: "We want to make it easier for people to vote, not harder."

She wonders if opponents of mail-in voting are truly concerned with reducing the number of questionable ballots, or simply the number of voters. "Voter suppression has been around for years," Stewart said. "It just takes different forms depending on what the political climate is."

And this year, Stewart said, it may take the form of budget cuts to the Postal Service, ordered by Postmaster General Louis DeJoy, that may slow down delivery of ballots. Appointed in May, DeJoy donated more than a million dollars to President Trump's Victory Fund.

Last week, DeJoy denied any election interference: "Despite any assertions to the contrary, we are not slowing election mail or any other mail," he said.

But the post office has sent letters to all 50 states warning that their voters could be disenfranchised by delayed mail-in ballots.

So, to be safe, Washington Secretary of State Kim Wyman warns voters to request AND return ballots as early as possible.

Moriarty asked, "Isn't that a real factor in the election, that people will fill out the ballot, they will send it in, and it won't get there in time?"

"Absolutely," Wyman replied, "and this is one place where voters really have to know their own state laws and the cutoffs for registering and returning a ballot.

"So, here in Washington, we have a postmarked ballot. As long as it's postmarked by Election Day, or before, we can count it, no matter when we receive it after Election Day through certification."

But it still means there will be delays – maybe a delay of weeks – before all the ballots in every state can be counted this November.

In New York's Democratic primary this past June, more than twenty percent of the mail-in ballots were tossed, and it took six weeks for some districts to declare winners.

Moriarty asked, "Is it possible that we're not going to know the winner of the Presidential election for days, weeks, a month afterwards?"

"Yes, that's actually my biggest fear right now, is that the expectation is Election Night – like most Election Nights, around midnight, one o'clock – we know who the president is going to be," Wyman said. "And in 2020, that is simply not going to be the case.

"We want to make sure that whoever wins was indeed the person, the candidate that the voters wanted," she said. "And that's going to take time. And the expectation should be that we will probably not know the President of the United States until mid- to late-November."