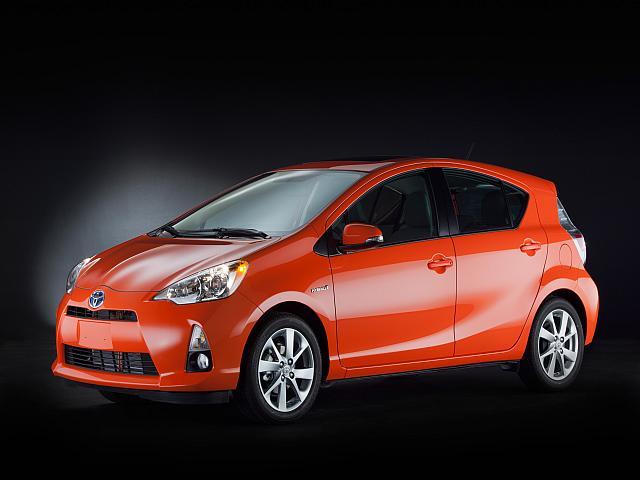 (MoneyWatch) As gas prices move within a dime of $4 a gallon, sales are soaring for a new small hybrid. Toyota is trumpeting that its just-introduced Prius C sold 1,201 cars in its first three days on sale. That is more than either of the best-known electric cars, Chevrolet Volt and Nissan Leaf, sold for all of February.

As the national average for regular moved to $3.91 a gallon today according to AAA, clearly shoppers are looking for an affordable car with high gas mileage. The Prius C is rated at 53 MPG in the city and 46 on the highway. Test drivers at Edmunds.com clocked 58.2 MPG in mostly city driving with the C.

But why the Prius C rather than the competition? Unlike a few years ago, affordable gas-only cars with high MPG are available, from the new Chevrolet Sonic to the well-established Honda Fit. But shoppers researching subcompacts at Edmunds.com made the Prius C the third-most considered car slightly behind the Ford Fiesta and Hyundai Accent.

"Awareness is generally low when a vehicle launches," says Jessica Caldwell, senior director of pricing and industry analysis at Edmunds. "It's rare to see a new vehicle show so much steam out of the gate."

Made in USA: 5 great American cars
Used cars: 5 to avoid (and 5 better alternatives)

Let's have a look at the likely market forces behind the Prius C's strong takeoff:

-- It's a Prius. From the introduction of hybrids in the U.S. market, Toyota has made Prius not only the biggest seller but the name virtually synonymous with hybrid cars. The C joins the Prius family that now includes the standard Prius, the roomier V and the plug-in hybrid which has a rechargeable battery.

--The C might stand for commuting. Clearly, a buyer using the car mostly for a daily drive to work through city or suburban traffic is not too worried about quick starts or big passing power on the highway. The C is in fact deadly slow, clocked by test drivers at 11.3 seconds from 0 to 60 MPH. But city driving is its strength for high MPG.

The Prius C is not for everyone. Families who need to haul luggage or gear would be better off with the bigger Prius or Prius V. But with gas prices headed still higher, it deserves a look from subcompact shoppers.