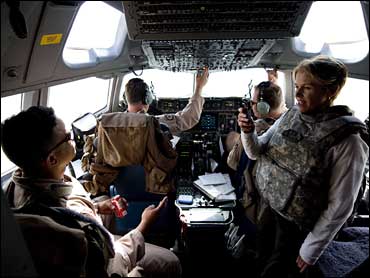 (DOD/Master Sgt. Jerry Morrison)
Today I rode in a black hawk helicopter over the poppy fields in southern Afghanistan with Brigadier General John Nicholson, Secretary Robert Gates and a few other folks.

I thought of that famous poem from World War I, John McCrae's "In Flanders Fields." It's one of my mom's favorites.

"In Flanders fields the poppies grow/Between the crosses, row on row," he writes.

I expected the poppies to be bright red flowers like the artificial ones people wear as a remembrance on Memorial Day, but there weren't any like that.

On the flight I was wearing a headset, so I could hear the Brigadier General briefing Sec. Gates on the opium situation.

The poppy crop is being harvested right now and made into opium which will later be refined into heroin. In fact, two thirds of the world's heroin supply comes from southern Afghanistan. Opium production accounts for 60 percent of this country's economy and it fuels the engine for the insurgency, with the Taliban making $70 to $100 million dollars a year.

So, how do you cut off this powerful source of drugs and money?

Ambassador Richard Holbrooke has said destroying the poppy fields would only strengthen the Taliban. As Sec. Gates told me today, you have to find a crop to replace the poppies or every farmer becomes a Taliban recruit.

The U.S. military is bullish about helping with an agricultural transformation....encouraging farmers to plant pomegranates or vineyards, arranging microfinance and giving economic incentives. Officials say Afghanistan is an agrarian culture, relying on farming for centuries and NOT poppies. Agricultural teams will be coming from the states to offer advice and water experts may help direct farmers about what can thrive in this often drought stricken land.

Whether they will be inspired to start anew is up for grabs, but there is little doubt that the Taliban in their role of narcotics traffickers will fight ferociously to keep the drugs and money flowing.

Something called "the killing season" begins after the poppy crop is harvested and some farmers pick up their guns and become fighters again. As the U.S. pursues a more aggressive strategy towards the opium drug trade and dispatches soldiers to the fields of southern Afghanistan, it may be a very bloody summer.