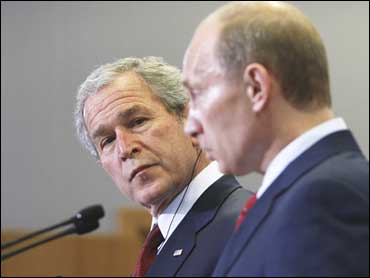 This column was written by Stephen F. Cohen

None of the remaining presidential candidates have seriously addressed, or even seem fully aware of, what should be our greatest foreign policy concern - Russia's singular capacity to endanger or enhance our national security. Overshadowed by the U.S. disaster in Iraq, Moscow's importance will continue long after that war ends.

Despite its diminished status following the Soviet breakup in 1991, Russia alone possesses weapons that can destroy the United States, a military-industrial complex nearly America's equal in exporting arms, vast quantities of questionably secured nuclear materials sought by terrorists and the planet's largest oil and natural gas reserves. It also remains the world's largest territorial country, pivotally situated in the West and the East, at the crossroads of colliding civilizations, with strategic capabilities from Europe, Iran and other Middle East nations to North Korea, China, India, Afghanistan and even Latin America. All things considered, our national security may depend more on Russia than Russia's does on us.

And yet U.S.-Russian relations are worse today than they have been in twenty years. The relationship includes almost as many serious conflicts as it did during the cold war - among them, Kosovo, Iran, the former Soviet republics of Ukraine and Georgia, Venezuela, NATO expansion, missile defense, access to oil and the Kremlin's internal politics - and less actual cooperation, particularly in essential matters involving nuclear weapons. Indeed, a growing number of observers on both sides think the relationship is verging on a new cold war, including another arms race.

Even the current cold peace could be more dangerous than its predecessor, for three reasons: First, its front line is not in Berlin or the Third World but on Russia's own borders, where U.S. and NATO military power is increasingly ensconced. Second, lethal dangers inherent in Moscow's impaired controls over its vast stockpiles of materials of mass destruction and thousands of missiles on hair-trigger alert, a legacy of the state's disintegration in the 1990s, exceed any such threats in the past. And third, also unlike before, there is no effective domestic opposition to hawkish policies in Washington or Moscow, only influential proponents and cheerleaders.

How did it come to this? Less than twenty years ago, in 1989-90, the Soviet Russian and American leaders, Mikhail Gorbachev and George H.W. Bush, completing a process begun by Gorbachev and President Reagan, agreed to end the cold war, with "no winners and no losers," as even Condoleezza Rice once wrote, and begin a new era of "genuine cooperation." In the U.S. policy elite and media, the nearly unanimous answer is that Russian President Vladimir Putin's antidemocratic domestic policies and "neo-imperialism" destroyed that historic opportunity.

You don't have to be a Putin apologist to understand that this is not an adequate explanation. During the last eight years, Putin's foreign policies have been largely a reaction to Washington's winner-take-all approach to Moscow since the early 1990s, which resulted from a revised U.S. view of how the cold war ended [see Cohen, "The New American Cold War," July 10, 2006]. In that new triumphalist narrative, America "won" the forty-year conflict and post-Soviet Russia was a defeated nation analogous to post-World War II Germany and Japan - a nation without full sovereignty at home or autonomous national interests abroad.

The policy implication of that bipartisan triumphalism, which persists today, has been clear, certainly to Moscow. It meant that the United States had the right to oversee Russia's post-Communist political and economic development, as it tried to do directly in the 1990s, while demanding that Moscow yield to U.S. international interests. It meant Washington could break strategic promises to Moscow, as when the Clinton Administration began NATO's eastward expansion, and disregard extraordinary Kremlin overtures, as when the Bush Administration unilaterally withdrew from the ABM Treaty and granted NATO membership to countries even closer to Russia - despite Putin's crucial assistance to the US war effort in Afghanistan after September 11. It even meant America was entitled to Russia's traditional sphere of security and energy supplies, from the Baltics, Ukraine and Georgia to Central Asia and the Caspian.

Such U.S. behavior was bound to produce a Russian backlash. It came under Putin, but it would have been the reaction of any strong Kremlin leader, regardless of soaring world oil prices. And it can no longer be otherwise. Those U.S. policies - widely viewed in Moscow as an "encirclement" designed to keep Russia weak and to control its resources - have helped revive an assertive Russian nationalism, destroy the once strong pro-American lobby and inspire widespread charges that concessions to Washington are "appeasement," even "capitulationism." The Kremlin may have overreacted, but the cause and effect threatening a new cold war are clear.

Because the first steps in this direction were taken in Washington, so must be initiatives to reverse it. Three are essential and urgent: a U.S. diplomacy that treats Russia as a sovereign great power with commensurate national interests; an end to NATO expansion before it reaches Ukraine, which would risk something worse than cold war; and a full resumption of negotiations to sharply reduce and fully secure all nuclear stockpiles and to prevent the impending arms race, which requires ending or agreeing on U.S. plans for a missile defense system in Europe. My recent discussions with members of Moscow's policy elite suggest that there may still be time for such initiatives to elicit Kremlin responses that would enhance rather than further endanger our national security.

American presidential campaigns are supposed to discuss such vital issues, but senators John McCain, Hillary Clinton and Barack Obama have not done so. Instead, in varying degrees, each has promised to be "tougher" on the Kremlin than George W. Bush has allegedly been and to continue the encirclement of Russia and the hectoring "democracy promotion" there, both of which have only undermined U.S. security and Russian democracy since the 1990s.

To be fair, no influential actors in American politics, including the media, have asked the candidates about any of these crucial issues. They should do so now before another chance is lost, in Washington and in Moscow.
By Stephen F. Cohen
Reprinted with permission from The Nation