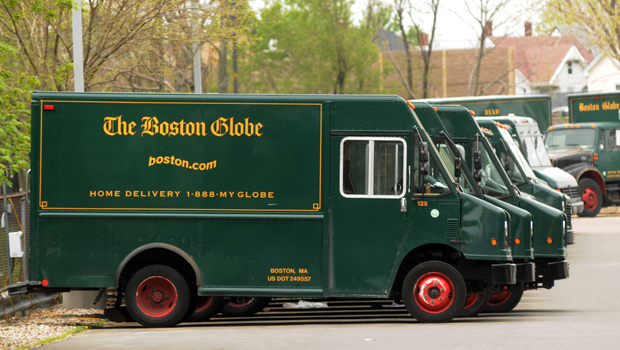 LOS ANGELES The New York Times (NYT) said Wednesday that it is putting The Boston Globe and its related assets up for sale four years after it called off a previous attempt to sell the newspaper.

Mark Thompson, the Times' chief executive, said in a statement a sale would be in the best long-term interests of both properties, "given the differences between these businesses and The New York Times."

The newspapers' differences are stark. The Times has a national -even international- audience. Last year, it even launched a Chinese-language website. The Globe is focused on its readers in the New England region.

Thompson said the sale would help the company focus on The New York Times' brand and allow the company to devote more resources to journalism.

Along with the Globe, the Times plans to sell the Worcester Telegram & Gazette; the publications' related websites; the Globe's direct mail marketing company, GlobeDirect; and a 49 percent interest in Metro Boston, a free daily newspaper for commuters.

The Times bought the Globe in 1993 for $1.1 billion from the family of Stephen Taylor, a former Globe executive. But the newspaper has faced difficulties in recent years as advertisers cut spending on newspapers and moved more ads online.

A round of cost cutting in 2009, which involved pay cuts, helped put the newspaper on better financial footing. It prompted the Times to call off a planned sale and rebuff the offers of several bidders. In late 2011, The Globe started charging for access to its online version at BostonGlobe.com. The move helped boost circulation revenues.

Times doesn't separate Globe revenue from Times revenue in its financial statements. But The Globe had an average weekday circulation of 230,351 in the six months through September, up 12 percent from a year ago, according to the Alliance for Audited Media. The newspaper's increase in digital subscriptions more than offset declines in print.

In September, the newspaper company sold its About.com website and related businesses for $300 million to Barry Diller's IAC/InterActiveCorp. In January 2012, the Times sold its regional media group to Halifax Media Holdings for $143 million.

Analyst Edward Atorino with The Benchmark said he views the sale as part of a strategy by the Sulzberger family that controls the Times to delist as a public company and go private.

"They're selling everything not nailed down," Atorino said. "The family will simply take the Times private. That's the only logical end game."