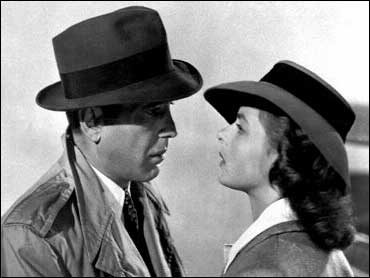 Is that classic Humphrey Bogart line to Ingrid Bergman in "Casablanca" the most romantic ever mouthed on the big-screen?

Which romantic lines deserve a permanent spot in Hollywood history as the MOST romantic ever? Which have made people swoon the most over the years, and which are simply among the - cheesiest?!

Films With Some of the Most Romantic Lines
Summer Cinema 2010

Why do many of them end up sounding cheesy?

Either screenwriters strain too hard for poetry or they sound as false and overheated as a drunk does who wants to get a woman to bed.

Did they write them better back in early days of Hollywood, or today?

The early days, because the dialogue was more stylized back then.

The first is from "Jerry Maguire": Rene Zellweger to Tom Cruise: "You had me at 'Hello.'"

We're talking about words and these five say -- in the smartest and funniest and wittiest way imaginable -- that most of the time words don't matter.

From "Leaving Las Vegas": Nicolas Cage to Elisabeth Shue: 'I am a drunk. And I know you're a hooker. I hope you understand that I'm a person who is totally at ease with this."

What made this line truly romantic?

Many of us, for better or worse, want to be loved as much for our weaknesses as our strengths. So this is, 'I'm screwed up, you're screwed up, let's drop our expectations and give each other succor.'

What makes a good romantic line?

A lot depends on who is saying it! Harrison Ford replies, "I know" to Carrie Fisher's, "I love you" in "The Empire Strikes Back." That could come off as arrogant, but he says it with such a twinkle that it's very sexy. A good romantic line should be easy to remember, but original enough not to sound trite.

Why do so many of them end up sounding cheesy?

Because love is personal and private. and much of what we say to loved ones probably is cheesy out of context. What might appeal to some as romantic can be laughable to others. For instance, I never cared much for, "You complete me," from "Jerry McGuire." Totally corny.

Did they write them better back in early days of Hollywood, or today?

I think they did (early on), but nostalgia has a lot to do with that, too. If comedy is tragedy plus time, then a good romantic line is corn plus time. Audiences were also less cynical back then. Many of those lines can seem over the top to us nowadays. But who can fault Bette Davis saying, "Let's not ask for the moon, we have the stars" from "Now Voyager"?

From "To Have or Have Not": Lauren Bacall says to Humphrey Bogart: "You know, you don't have to act with me, Steve. You don't have to say anything, and you don't have to do anything. Not a thing. Oh, maybe just whistle. You know how to whistle, don't you, Steve? You just put your lips together and ... blow."

What made this work?

From "Gone with the Wind": Clark Gable says to Vivien Leigh, "You should be kissed. And often. And by someone who knows how."

Would this line work in today's world?

Probably not!! It smacks of male chauvinism, as if a man really knows what a woman wants. However, women often complain that men don't take charge enough, and even though we are equal in every way, many women still respond to what is typically thought of as a strong male.

Also, at the time it was set (the 1860s), women weren't supposed to know how to do anything in the bedroom! Rhett Butler was known to cavort with women of the night, which made him "knowledgeable" and "experienced."