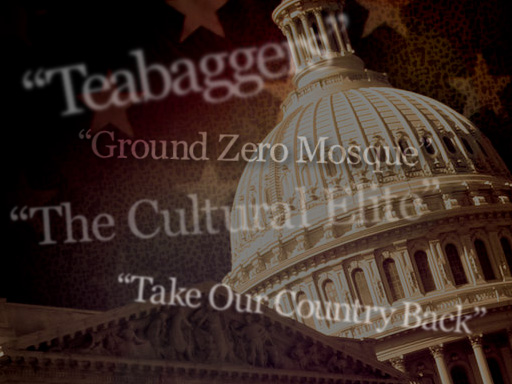 You've heard them before: The litany of phrases politicians use to frame a debate in their favor or score political points against their enemies.

But have you ever really thought about why a politician is insisting a policy is being "jammed down our throats?" Or wondered about those condemnations of "the cultural elite" from those who very much seem to be a part of it?

We got tired of hearing those phrases pass without comment, so we put together a sideshow showing the who, what and why of the most loaded phrases to come out of the mouths of America's pundits and politicians.

It's the sort of word you might expect to hear from a smirking 14-year-old boy: Critics of the Tea Party movement like to refer to its members as "teabaggers," a reference to a sexual act known as "teabagging," which we're going to refrain from explaining here. To give you an idea of both the meaning of the word and the juvenile way it gets used, consider this comment from MSNBC's David Shuster: "...the teabaggers are full-throated about their goals. They want to give President Obama a strong tongue-lashing and lick government spending."

Some who use this term have pointed out that there are those in the movement who have identified themselves as "teabaggers." But that doesn't excuse the poor taste of opponents of the movement who opt for crude and substance-free attacks instead of seriously engaging the ideas behind the Tea Party movement.

To keep reading start here, with "Jam Down Our Throats." Then click through for the rest.

Or, to start from the beginning...