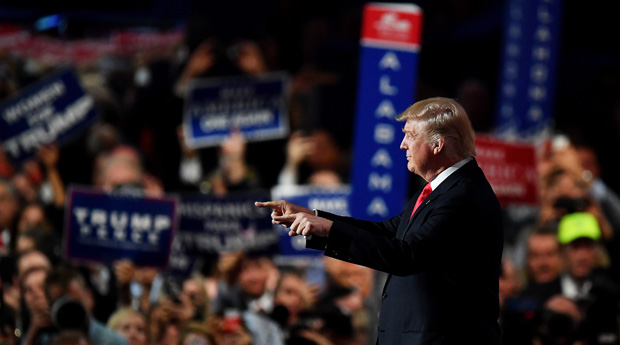 Donald Trump won the Republican presidential nomination this past week after a primary campaign like no other. Our senior contributor Ted Koppel, who spoke to Trump this past week, offers some of what he saw and heard during Cleveland's tumultuous week:

They were still popping balloons late into the night, but, it's done. Donald Trump and the GOP are hitched, and as was the case with more than a few weddings, this one had its share of skeptics.

But the more the family elders tried to talk the kids out of it (you know, the "he-really-isn't-our-kind-of-people" conversation), the more the kids -- Trump's supporters -- dug their heels in.

"I've waited for Donald Trump to run for 20 years of my life," said David Jones. "And to me, this is the greatest thing that's gonna happen in America since Ronald Reagan."

So, the Bushes and the Romneys, the McCains and the Kasichs stayed home -- even though Ohio IS home for John Kasich.

"Maybe we need somebody who's done nothing in politics, done a lot in other areas, and can get us to rethink our politics," Giuliani said. "Because our politics right now is dysfunctional."

Whereas journalist Carl Bernstein remarked, "Look, I said on the air very early, and I believe this, Trump is a neo-fascist."

For more than 40 years now, the poster boy for what many Republicans dislike and mistrust about the "liberal media" has been Carl Bernstein of Watergate fame. But "neo-fascist"? Really?

"In a peculiarly American sense," Bernstein added. "A strongman who doesn't believe in democratic institutions or even understand them. Who just thinks he can come in and will his way to get people and movements and countries into submission."

"Every Trump supporter out there sees that sound bite and says: 'That S.O.B. Carl Bernstein, that's exactly what I would have expected him to say,'" said Koppel.

"And goes crazy. That is exactly right. But I'm also gonna say the following: He has had an unerring sense of the grievances of the people of this country."

Trump's detractors, of course, think the press has given him a free ride. They'll point to what The New York Times estimates at $2 billion worth of free media coverage.

Positive coverage clearly helps Trump, but even negative coverage only seems to confirm the conviction, among his supporters, that their man can't get a fair shake.

"There's been a lot of anger on the part of a whole lot of people about how much free media was given to Donald Trump," said Jeff Greenfield, who's been writing about politics for 50 years. "What has been so interesting is that, when the media began to raise really tough questions that would have disqualified almost any other candidate, so far those challenges have not seemed to have any impact."

Trump's had to contend with more than just "liberal media." The National Review -- a conservative icon -- has been trashing Trump, as has the Weekly Standard and The Wall Street Journal -- "conservative media"!

You'd have to consider the possibility that the more Donald Trump is rejected by party elders and reviled by commentators and columnists, the more passionately he's embraced by his supporters.

"I mean, look how many people tried to stop him from getting a nomination, because they didn't like what he was going to be doing," said Christopher Harvey, a member of the Texas delegation. "He was going to be messing up what they been used to for I don't know how long. So Donald Trump is the type of person that's gonna go out there and fire this country up. Get this country passionate about being America again."

Among all media in the United States, none has more clout than The New York Times.

Koppel asked columnist Andrew Rosenthal, "What is it about Donald Trump that makes those who support him so passionate in their love and admiration for him?"

"I think it's because he expresses things that they've been afraid to say -- some of their anger and their alienation and their disaffection from what's going on around them," Rosenthal replied. "And he's allowed them to be really enraged. And that's a very powerful thing."

"If he does alienate his true believers by being more 'presidential,' and he can't appeal to the middle without being more presidential, is that a solvable problem?" Koppel asked.

"I don't know that that's the case," Jones responded.

There is, among many Trump supporters, a mind-set similar to what movie and theater-goers engage in: the willing suspension of disbelief.

As when Trump made these remarks about 9/11:

"I watched when the World Trade Center came tumbling down, and I watched in Jersey City, New Jersey, where thousands and thousands of people were cheering as that building was coming down."

Koppel said, "We live in an era in which, if a kitten falls into a toilet bowl, there are three people with iPhones there that will record the event."

"If thousands of people on the day that the towers, the twin towers, came down, in this day and age, were out there demonstrating, you don't think one person would have taken a picture of it?"

"It was a very different time," Jones said.

We are not, as Jeff Greenfield underscores, talking about just an occasional fib.

"The Washington Post, when it does its fact checks, they found that roughly two-thirds of his statements are flatly, factually false," Greenfield said. "The dilemma, the limit is, you can't in a newscast say,. 'Donald Trump, who has serially lied his way through the last ...' Can't do that, even if you thought that was factually true."

And even if you could say something like that, media gate-keepers have lost a lot of their impact.

"Donald Trump has recognized that he can have a direct connection to millions of supporters, without having to rely on any third-party infrastructure," said Adam Sharp, head of news, government and elections for Twitter. "It used to be a candidate would have to get booked on the evening news to reach millions of people with that sound bite they wanted to drive the agenda that day. Donald Trump picks up his phone, types a sentence, clicks 'send,' and now millions of people have that message delivered directly to them."

What happens next is far from a foregone conclusion. A recent CBS News/New York Times poll indicates that staggering majorities consider both Trump and Clinton untrustworthy.

Janne Myrdal, a delegate from North Dakota, says she is an evangelical. Koppel asked, "It doesn't bother you this guy's been married three times?"

"Yes, it does. Yes, it does. Yes, it does. But it bothers me more, for the future of my children with somebody ... I know what I'm getting with Hillary. With Trump, we don't know yet. So I agree with you. And you know what? I'm a native of Norway. I'm a citizen now. And my brother called me up the other day, and he said, 'Out of 300 million people in America, you have this buffoon and this criminal family dynasty; can't you come up with somebody else?' And I said, 'Apparently not.' So, that's an honest answer."