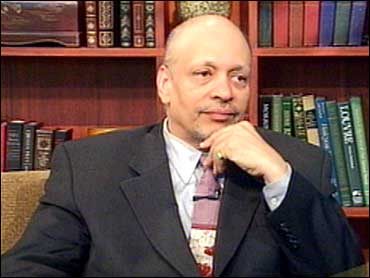 Walter Mosely has earned a legion of fans with his popular Easy Rawlins detective series. But now the author is receiving some of the highest critical praise of his career for his latest novel "The Man In My Basement," which has been called "riveting," "successful" and "audacious."

Though short, the book deals with the deep and hard issues of morality, race, power and accountability.

Mosley tells The Early Show co-anchor Rene Syler, "I'm very impressed by the French writers in the middle of the 20th Century who thought you should be able to say big issues in a small amount of space. I tried very hard to just tell the story but have that story encompassed in a larger world."

"The Man In My Basement" tells the story of Aniston Bennett, a white powerful businessman who has exploited and manipulated people, and Charles Blakey, a black young American man who is lost.

Mosley explains, "Blakey is a black man but lives on the eastern end of Long Island, a place where there are a lot of black people whose ancestors were never slaves and he believes that. He's a slacker and has a big beautiful house but it's mortgaged and he doesn't have any money." He's about to lose it and his wife says, 'I want you to rent the basement.'"

To keep the house, Blakey has to rent his basement to Bennet, who transforms it into a prison for himself and offers Blakey a chance to be his jailer.

Mosley notes Bennet "is trying to pay for crimes that he's done and Blakey needs the money. The way I see the novel is, the face of evil, Aniston Bennett, meeting the face of innocence, not necessarily good, but innocence, Charles Blakey. And it's how they talk and inform each other and affect each other's lives."

Next for the author is "Little Scarlet," another Easy Rawlins novel that takes place five days after the Watts riots. A black man is killed and a white man is suspected and police, who cannot effectively work in the neighborhood because of the riots, hire Easy to find him.