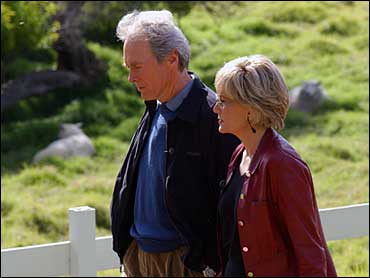 Who would say "No" to Clint Eastwood, the actor who's best known for his line, "Go ahead, make my day?"

But despite all his clout, earned over four decades in Hollywood, this Oscar-winning actor and director had a hard time convincing a studio to let him make "Mystic River," which is nominated for six Academy Awards.

So Eastwood came up with a very un-Hollywood solution to get it made. "I said I'll work for nothing on it," says Eastwood. "It's ironic that 33 years later, from my first film, where I deferred my salary on, I'm back doing the same thing."

As Anchor Lesley Stahl reports, Eastwood is one of those directors the best actors want to work for.

"I knew he'd been thinking about me, so I asked him to think a little harder," says actress Marcia Gay Harden.

"I wanted to work on this particular script, definitely," says actor Tim Robbins.

The movie features Sean Penn, Kevin Bacon and Robbins, who play kids who grew up together and are reconnected when the daughter of Sean Penn's character is murdered.

Penn's searing performance as Jimmy Markham earned him a Best Actor nomination. Tim Robbins and Marcia Gay Harden earned nominations, too, for their supporting roles as husband and wife, Dave and Celeste Boyle. Their marriage is pushed to breaking point, when Dave becomes a suspect in the death of Jimmy's daughter.

Bacon plays a cop, a role that Clint Eastwood has played many times in his career. But he says he didn't make that connection until he went to the Cannes Film Festival: "All of the journalists were like, 'So you are Clint in this movie. You are Clint.'"

To give "Mystic River" an authentic look and feel, Eastwood chose to shoot the entire film on the gritty streets of South and East Boston.

"It was like Clint set up a movie camera in my living room and said, 'We're gonna make a movie," says Kevin Chapman, 41, a true South Boston native. "This is home to me. This is all I've ever known."

He's someone who Eastwood thought would lend the edginess he wanted to the film: "I thought he was a terrific actor. I said, 'This guy is the real deal. So I cast him right away.'"

He plays a small but memorable role as Jimmy Markham's brother-in-law, Val Savage. But Chapman, who has only been acting for four years, says he wasn't intimidated by the big stars in front of or behind the camera: "Clint looked at me and said, 'How do you feel, kid?' And I said, 'It's a home game.'"

Chapman took 48 Hours on a tour of his old neighborhood, where much of the movie was shot. They visited Millers Market, which is called The Cottage Market in the film. Penn's character, Jimmy Markham, owned this market, and it was the last place he saw his daughter alive.

Mary and Bobby Noto, two of the store's real-life owners, were thrilled to have Hollywood show up at their doorstep. "Clint has his arm around me," says Mary Noto, pointing to a photo in her scrapbook.

Eastwood is also popular with actors because of his unorthodox directing style – which grew out of the lessons he learned as an actor.

Eastwood is the "Dirty Harry" director: calm, minimal and quiet. "That's a fairly decent description," says Eastwood. "Quiet, I like quiet, because there's just something nice about having a nice tranquil moment and then somebody just going, 'OK.'"

But there's something else that's unique about Eastwood. He's known as the one-take director.

"He loves the spontaneity of the first few takes," says Harden.

"I love it when it's one take," says Eastwood. "I love a scene when, right away, you see it and it appears there and go, 'That's it.'"

So what happens when that's not it? Marcia Gay Harden found out.

"We're shooting a scene in the rain. And I thought, 'I get it. It's rain. Celeste is in the rain. She's crying like the rain,'" says Harden. "So he says, 'Whenever you're ready,' and I'm like thinking I would impress him with immediate tears and angst and whatnot. And we finish the shot, and I thought he would say, 'Great, Marcia, thank you.' And he says, 'Marsh, can you take it way, way down?' And I said, 'Oh, I'm sorry. I realize she's not the rain.' He says, 'Marcia, 'She's not even the mist.'"

The fact is, Eastwood says he wants his actors to take chances: "If you're afraid to take risks in anything in life, it's just boredom."

So there are no rehearsals on his sets. "We were all a bit nervous, I think, about not rehearsing at all," says Bacon. "Sean's idea. We would get together at night in somebody's room and just read through the screenplay."

In those sessions, Kevin Chapman had the leading role.

"He would be the police as far as our accents," says Robbins. "He was deputized to strike us if we sounded inauthentic."

But as challenging as the accent was, it's another kind of challenge Sean Penn remembers: "I think the most difficult was the scene where myself and Kevin Chapman approaching the crime scene, where we're going to try to get to see whether it was my daughter who has been killed," says Penn. "I'm going to do everything that I can to get to my daughter."

"The first take, it got a little rough," says Chapman. "But by the third take, it seemed like we each had a football team on our shoulders."

"Before I knew it, there were 18 policemen on me, and there wasn't a muscle I could move," adds Penn. "But nobody got hurt, and I got to go as far as I wanted to go."

But what sticks in Robbins' memory is the psychic challenge of playing a man sexually tortured as a child. "The toughest one was probably the one where he talks about the vampires," he says, referring to the first time he tells his wife about the abuse he suffered as a child.

"At the end of the day, I said something to Tim, totally in character, you know,'" recalls Harden. "'Isn't it amazing how events of a childhood are passed on?' And he just turned to me and said, 'Are you cuckoo for Cocoa Puffs?' I mean, I think he was done. He was done."

"On the last day of the picture, when we were all saying our goodbyes, he said that it was really gonna be a relief to get rid of this character for a while," says Eastwood.

While this dark and serious movie may have scared some studio executives, it's been embraced by filmgoers, taking in almost $70 million – more than twice what it cost to make.

So Eastwood got his paycheck, after all. "I'm not one of those people that likes to say, 'I told you so,'" he says. "I wanted it to succeed only to accomplish what I wanted to accomplish."

Eastwood hopes the success of "Mystic River" will encourage Hollywood to make more serious films. Winning a few Oscars might help make that happen. And "Mystic River" is up for six awards – including Best Film and Best Director.

How important is it to win the Oscar this time?

"I'm not going to be a cornball and say it's nice to be nominated," says Eastwood. "You just want your guys to win. The main thing is, you just want to have your place in history. You hope that people will look back on it in 15, 20, 30 and beyond years, and say, 'That was an exciting film.'"

Who is the woman claiming to be missing teen Mary Day?