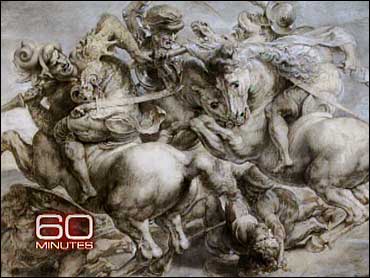 In the art world, there is perhaps no mystery more enduring than the fate of a lost masterpiece by Leonardo da Vinci, the greatest mind of the Renaissance. It was an immense unfinished mural known as "The Battle of Anghiari." For centuries, it has been assumed the work was destroyed, painted over or simply faded away long ago.

Now, after three decades of battling skepticism and bureaucratic resistance, an art detective named Maurizio Seracini believes he's close to solving the Leonardo mystery. As correspondent Morley Safer reported in April, Seracini suspects the mural hasn't been lost at all, but is right where it's always been - for 500 hundred years.


"We are searching for the number one work of art by Leonardo. It was considered the masterpiece of the Renaissance," Seracini tells Safer.

We know roughly what "The Battle of Anghiari" looked like from fragments of Leonardo's sketches and copies made by his admirers before the mural disappeared. It celebrated a victory by Florence over Milan - a furious tangle of men and horses frozen in the fever of war. The painting was in its time, at the beginning of the 16th century, something to behold.

"We have diaries, for example, of people seeing and being in admiration of the horses of Leonardo," Seracini says.

The people came to the Palazzo Vecchio, the town hall of Florence. The city is ground zero of the Italian Renaissance, the rebirth of ideas and the arts in the 15th and 16th centuries that brought Europe out of the Dark Ages. Here, in the shadow of Dante, Machiavelli, and of Leonardo himself, Seracini searches for the "The Battle of Anghiari" using 21st century technology that can peer through paint, through stone walls, even through history.

"You simply have to go beyond what your eyesight can do," Seracini explains.

He believes the mural is on the east wall of the palazzo in the "Hall of 500," which was the seat of government five centuries ago. There, Seracini works on an enormous scaffold. To drop anything could be disastrous: standing right below is a priceless statue by Michelangelo. He is convinced Leonardo's mural lies protected behind an immense painting, which was done by the artist and architect Giorgio Vasari when he remodeled the palazzo in the mid-16th century, 50 years after Leonardo.

Seracini believes the Leonardo mural is on a second wall behind Vasari's painting, separated from it by a small air gap, which appeared on a radar scan. Of the six Vasari murals in the room, only the one has an air pocket behind it.

"Why would you have an air gap just there?" Seracini asks. "Other than you don't want to place a wall directly in contact with Leonardo's mural because you don't want to ruin it, you want to damage it. He left just that air gap enough so that today we can have this masterpiece."

Safer joined Seracini on the scaffold facing the Vasari painting. He must work without even touching it. His equipment works best in the cold, and on the night 60 Minutes visited it was near freezing in the huge room. If Seracini is right, the lost Leonardo lies just a few tantalizing inches behind Vasari's battle scene, itself 450 years old.

And close to the ceiling, Seracini has discovered another tantalizing clue impossible to see from the floor below: the words "Cerca Trova" painted on a flag - "Seek and ye shall find." Was it a message from Vasari to the future?

"Is all this a coincidence? Maybe. If it is, it's a very nice coincidence," Seracini says.

Off and on for 30 years, Seracini has prowled this building, trying to sort out what happened to the Leonardo. Five hundred years ago, the palazzo attracted the greatest musicians, painters and sculptors of the age, summoned there by the Medici, the rulers of Florence for much of the Renaissance. They were a family with a ruthless gift for profit and position, and a passion for art.

In the map room, the Medici plotted strategy; they prayed in their private chapel. The palazzo also has its grisly history: the renegade priest Savonarola was jailed in the tower, then publicly burned at the stake in the piazza below.

It was in 1504 that the republican government of Florence commissioned Leonardo to paint the battle of Anghiari.

Leonardo turned up at the palazzo carrying a small painting he'd been working and re-working. He set it aside, and began his preliminary drawings for the battle scene. The "little" painting he carried was none other than the Mona Lisa.

"Do you ever feel there's a ghost of the master looking over your shoulder?" Safer asks Seracini.

"Well, I don't know if I can say that I felt the presence of Leonardo. What I can say is, it has to be there. Right there. We'll find out," he replies.

Seracini's search is the culmination of a career using 21st century technology to unlock ancient history. His tools are lasers, ultrasound, ultraviolet light, and heat mapping - things even the genius Leonardo never dreamed of.

At the University of California, San Diego, Seracini presides over an extremely hi-tech center for diagnosing the health of art treasures, helping to figure out how to restore fragile paintings, even buildings. A tiny fleck of paint can yield answers to who did the work, and when. Seracini has mapped out the Palazzo Vecchio in astonishing detail, using images 100 times sharper than any high definition television.

"We have managed to see every single brick. Every single stone that is there. As never done before," he says.

He studied in San Diego himself, 35 years ago, planning a career in medical technology. Asked how he got from wanting to cure patients to wanting to cure paintings, Seracini tells Safer, "Well, it looks like a big jump. A big leap. But it's very straightforward. I wanted to put together art and science."

And art was in his blood: Seracini was born in Florence, where for six centuries children have grown up among the world's most treasured objects.

Upon his return from school in California, Seracini recalls that a friend asked him a fateful question. "Don't you have any technology that could tell us if there is something left on 'The Battle Of Anghiari'? We're talking about 1975. Now that was enough for me to drop everything I was doing."

So 30 years ago, a young Maurizio Seracini set out to convince the art world that with his equipment he might find Anghiari somewhere in the Palazzo Vecchio. Experts were skeptical, and after two years Seracini hit a dead end.

"In 1977 I had to quit. Because there was no technology good enough to solve the research. The mystery," he explains.

But over the years technology improved, and Seracini built a solid reputation as an international art detective, an art doctor. He stunned historians with his work on another unfinished Leonardo, "The Adoration of the Magi." Seracini revealed that the brown haze on the painting had been added later by someone else.

Even more breathtaking was his ability-without even touching the painting-to reveal Leonardo's under drawing, his very first ideas.

His computers in San Diego allow us to "walk" into the painting, taking us beneath the surface, revealing a world of detail obscured for five centuries - including a frenzied battle scene, similar to Anghiari.

"He has done remarkable work this way. His imaging techniques with infrared reflectology are really, really fantastic resources for art historians," says Carmen Bambach, the Leonardo expert at the Metropolitan Museum of Art in New York.

Bambach finds it somehow fitting that science is filling in some of the blanks in our understanding of the artist. After all, Leonardo's notebooks are full of his own visionary scientific thoughts - from machines of war to flying machines, sketched in the 1490s, four centuries before the Wright brothers.

And so too does the art detective. Night after night, after the tourists leave, Seracini returns to the Palazzo Vecchio to better understand the composition of the hidden wall where "The Battle of Anghiari" might be. When 60 Minutes joined him at the palazzo, he was measuring the heat given off by the bricks and stones inside.

"The bigger the difference is between the body emitting heat and the room the better you will see the image," Seracini says.

He goes about his business, literally, an inch at a time. "Because this is the lifetime chance, which I have been waiting for more than half my life," he says.

Back in San Diego, Seracini's measurements from Florence are "stitched" together. The flood of data represents every substance that might be hiding Leonardo's painting. By eliminating them, Seracini should be left with a dim representation of what lies beneath in the Palazzo Vecchio.

"After 32 years, finally we will come to the final conclusion of the mystery, because you will be able to prove that Leonardo is there," Seracini says.

"Or not," Safer remarks.

"Or not," Seracini acknowledges. "But it will be a definite answer."

He is about to enter the home stretch. A precious cargo of bricks stored away during renovations of the palazzo arrived in San Diego. They'll be painted with the same pigments we know that Leonardo favored, and then used to calibrate newer, more powerful instruments. And with luck, by year's end, Maurizio Seracini will know the outcome of his 30 year quest.

Asked if he ever contemplates the possibility of failure, Seracini tells Safer, "I accept it only if failure means that for some reason it was destroyed. But that it is not there, has never been there, no. I don't contemplate."

"In the end, if the imaging techniques provide us with a glimpse, at least?" Safer asks Carmen Bambach.

"It'd be the glimpse of genius, and I think everyone will probably weep," she replies.