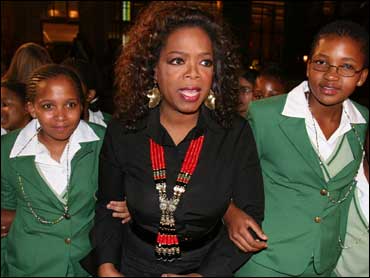 The musical is celebrating its 10th anniversary, and the South African run has been called a homecoming for the show whose score, choreography and story all have roots in the country.

"There would be no 'Lion King' without South Africa. This is where the umbilical cord was first cut," said Oprah Winfrey, whose guests at the opening included all 149 pupils from the girls academy she opened near Johannesburg earlier this year.

Winfrey was greeted by an actor dressed in a Zulu warrior costume who danced for her as singing and drumming stirred anticipation.

"There are going to be a lot of girls coming out tonight wanting to be in theater," she said. "So much for forensic science."

"When you have a story that has such heart, it can play anywhere," Iger said. "We hope it means a lot, economically and culturally, to South Africa. This is a market that means a lot for Disney. There is a lot of potential for growth."

South African Deputy President Phumzile Mlambo-Ngcuka was among the local politicians and celebrities who attended the opening.

The day before, the mainly South African cast and crew were feeling the pressure to keep up standards set by previous productions of "The Lion King." The show has won 70 awards worldwide - including six Tonys - since opening on Broadway a decade ago under Taymore's direction.

Audiences "expect this production to be the best 'Lion King' ever because it's in South Africa now," said Simon Gwala who plays Banzai, one of a trio of villainous hyenas in the story of Simba, a lion cub, that is adapted from the Disney animated film.

"Anybody that works 'The Lion King,' because of its technical complexity — it's almost like you now have this university certificate where you can work anywhere else in the world with any other show," he said in an interview.

The show brings a new level of sophistication to local theater in its debut at the Montecasino Teatro, a $14.5 million, 1,900-seat facility that is the first of its kind on the continent.

With a 53-member cast and six 40-foot trucks worth of staging and scenery, "The Lion King" is one of the biggest touring productions currently being performed in the world, said head technician Mark Henstridge.

Michael Bagg, who plays Ed, another hyena, credits Toerien with bringing new standards to local theaters, starting with a production of "Les Miserables" in 1995. Toerien subsequently produced a string of Broadway hits in South Africa including "Cats," "The Phantom of the Opera" and "Jesus Christ Superstar."