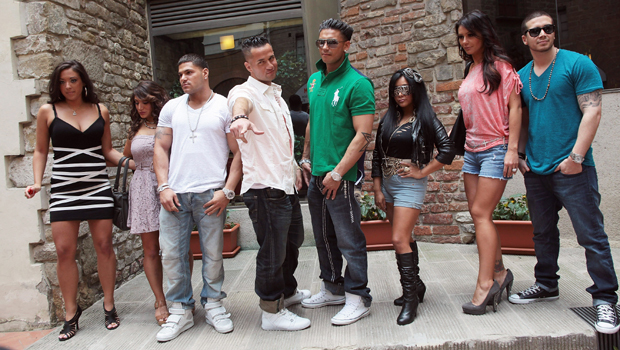 (CBS) Denna, JWOWW, "The Situation," Pauly D, Ronnie, Sammi, Snooki and Vinny are all back at their Seaside Heights stomping grounds after last season took them out of their element and sent them to Italy.

As evidenced by the drama-filled season five trailer (see below), the whole "Jersey Shore" gang is back and ready to get down to their usual debauchery in New Jersey for the fifth season of the MTV series, which premieres Jan. 5 at 10 p.m. E.T./P.T.

In the trailer, Pauly D says his final "arrivederci!" to Florence and the crew heads to New Jersey for another wild summer in Seaside Heights

"We're back in our habitat and I'm ready to tear the speakers off this joint," Mike "The Situation" Sorrentino yells.

And that is exactly what they seem to do in the trailer, from throwing punches at Karma, to a milk fight, to someone in a giant bunny costume, it seems fans won't be disappointed.

The surprise of the trailer is when Vinny is seen heading out the door with his bags packed.

"This is real. This is reality right here. Vinny's out of here," Paul D says in his confessional.

Of course, the main drama of this season is between "The Situation" and Snooki, with Mike claiming to have a secret about Snooki's boyfriend,  which he claims he plans on "blowing it wide open."

Check out the "Jersey" drama for yourself in the trailer below.