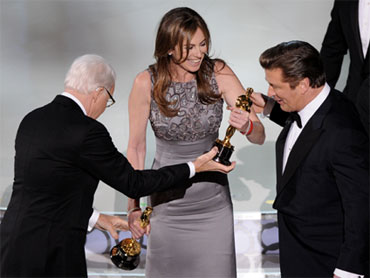 Her movie also won Best Picture, shutting sci-fi favorite "Avatar" out of the major awards. Both movies went into the ceremony with nine nominations; "The Hurt Locker" won six, and "Avatar" claimed three.

Photos: Oscar Red Carpet
Photos: Scenes from the Ceremony
Oscar Fashion Heavy on Gold and Flowers
For Best Picture: "The Hurt Locker"
A List of Oscar Winners
Oscar Nominees: In Depth
What You Didn't See on TV
The Fantastic Mr. Clooney & Other Stories

Bridges was the only winner nominated before, and he had four previous nominations.

Argentina's "The Secret in Their Eyes" pulled off a surprise win for foreign-language film over higher-profile entries that included Germany's "The White Ribbon" and France's "A Prophet."

More in The Academy Awards

"The Cove," an investigation into grisly dolphin-fishing operations in Japan, was picked as best documentary.

"There's no other way to describe it. It's the moment of a lifetime,"
Bigelow said. "It's so extraordinary to be in the company of my fellow nominees, such powerful filmmakers, who have inspired me and I have admired, some of them for decades."

Among those Bigelow and "The Hurt Locker" beat are ex-husband James Cameron and his sci-fi spectacle "Avatar." Bigelow and Cameron were married from 1989-91.

In his acceptance speech, Bridges, who won for his turn as a boozy country singer trying to clean up his act in "Crazy Heart," referred to his acting family, which included the late Lloyd Bridges, the star of TV's "Sea Hunt" and brother Beau Bridges.

"Thank you, Mom and Dad, for turning me on to such a groovy profession,'' he said, adding, "This is honoring them as much as it is me."

Bullock, an industry darling who had never before been nominated, won for her role in "Vlind Side" as a real-life wealthy woman who takes in homeless future football star Michael Oher, who was living on the streets as a teen.

The award wraps up a wild year for Bullock, who had box-office smashes with "Blind Side" and "The Proposal" and a flop with "All About Steve," which earned her the worst-actress trophy at the Razzies the night before the Oscars.

"Did I really earn this or did I just wear you all down?" Bullock asked the Oscar crowd.

Best know for her low-brow humor, Mo'Nique won the Oscar for Best Supporting Actress for her role as an abusive mother in "Precious: Based on the Novel 'Push' by Sapphire."

The first award, Best Supporting Actor, went, as expected, to Austrian-born Waltz for his role as a Nazi in Quentin Tarantino's "Inglourious Basterds." Both he and Mo'Nique had snapped up most of the season's supporting actor prizes.

Waltz, a veteran stage and television actor in Europe, had been virtually unknown in Hollywood before Quentin Tarantino cast him as the prattling, ruthless Hans Landa in his World War II saga.

His award was presented by last season's supporting-actress winner, Penelope Cruz, who gave Waltz a kiss as he took the stage.

An Oscar for Waltz seemed a foregone conclusion since last May, when "Inglourious Basterds" premiered at the Cannes Film Festival and won him the acting prize there.

The actor creates one of the great screen heavies, a lovably loathsome psycho who gets an agonizing comeuppance at the hands of Brad Pitt, playing the leader of a band of Allied Jewish commandos that terrorizes the enemy, collecting German scalps and carving swastikas into Nazis' foreheads.

"Quentin with his unorthodox methods of navigation, this fearless explorer, took this ship across and brought it in with flying colors, and that's why I'm here," Waltz said."This is your welcoming embrace, and there's no way I can ever thank you enough."

"Up" earned the third-straight Oscar award for Disney's Pixar Animation, which now has won five of the nine awards since the Academy of Motion Picture Arts and Sciences added a category for animated features.

The film features Ed Asner providing the voice of a crabby widower who flies off on a grand adventure by lashing thousands of helium balloons to his house.

"Never did I dream that making a flip-book out of my third-grade math book would lead to this," said "Up" director Pete Docter.

The country-music tale "Crazy Heart" won for original song with its theme tune "The Weary Kind."

The song category typically comes late in the show, after live performances of the nominees that have been spaced throughout the ceremony. Oscar producers tossed out those live performances this time in favor of montages featuring the songs and footage from the films they accompany.

But it may have beenthe night's only surprise as most awards were handed out as expected.

Leaders of the Academy of Motion Picture Arts and Sciences widened the best-picture category from the usual five films to expand the range of contenders for a ceremony whose predictability had turned it into a humdrum affair for TV audiences.

Oscar ratings fell to an all-time low two years ago and rebounded just a bit last year, when the show's overseers freshened things up with lively production numbers and new ways of presenting some awards.

The overhaul continues this season with a show that farmed out time-consuming lifetime-achievement honors to a separate event last fall and hired Martin and Baldwin as the first dual Oscar hosts in 23 years.

But Sunday's ABC Oscar broadcast almost lost several million fewer viewers after the network switched off its signal to 3.1 million Cablevision subscribers in the greater New York area in a dispute over fees.

A downpour accompanied by thunder and lightning pummeled a plastic tent protecting the red carpet outside Hollywood's Kodak Theatre as stars arrived Sunday for the evening's Academy Awards presentations.

Jeremy Renner, a Best Actor nominee for "The Hurt Locker" was accompanied by his mother, Valerie, as he walked the red carpet. Best actress Gabourey Sidibe also was planning to take her mom.

Morgan Freeman, nominee for Best Actor, walked the red carpet with his daughter at his side.

"It's a beautiful day," said Anika Noni Rose, a voice star of "The Princess and the Frog."