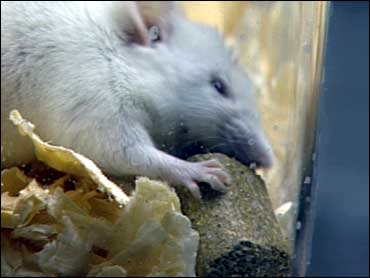 The United States is the fattest nation on earth. Two-thirds of Americans are overweight. Nearly 59 million are considered obese, putting them at risk for diabetes, heart disease and high blood pressure.

Ghrelin is the hunger hormone. It’s made in the stomach, and it tells the brain when it’s time to eat. Ghrelin doesn’t cause obesity, but scientists think taming it might help us get our scales back in balance.

They’re also investigating an opposite hormone – PYY – that makes you feel full.

So, as 60 Minutes II asked this spring, what if we could take a drug that would shut off our ghrelin or boost our PYY?

In labs around the country, the race is on to find out. Correspondent Vicki Mabrey reports.

The search for a billion-dollar solution to fat begins with mice.

In a lab at the St. Louis Veterans Affairs Hospital, and in others like it, scientists are studying rodents to learn about the human appetite. They’re trying to find out why the hormone ghrelin makes a mouse so ravenous.

We observed one illustration of ghrelin’s power. A mouse was injected with the hormone. Just 15 minutes later, he was absolutely wild for food, even though he’d already eaten enough to be full.

Scientists are finding that ghrelin has the same power over people.
That discovery was made in part through the experience of a man named Jim Rudolph, who used to weigh 460 pounds.

Taking a stroll along Seattle’s waterfront, Rudolph says, “I’m so happy to be able to walk like this today.” Not long ago, he couldn’t walk, drive or fit into one airplane seat. He also needed an electric cart to get around.

Then, a pair of size 65 pants was a tight fit. He saved them to show 60 Minutes II that he can now fit into one of the pant legs.

He lost 195 pounds after his procedure. But that’s not surprising, since gastric bypass reduces the stomach by 95 percent.

What is surprising, scientists say, is what Rudolph’s surgery revealed about appetite, and about the only hormone known to trigger it. The surgery seems to have killed the ability of Jim Rudolph’s body to produce ghrelin, or at least it put that function to sleep.

“I don’t seem to get really hungry,” he says. “It’s not necessarily hunger like the old hunger, going, you know, ‘Feed me.'”

His team’s findings have captured the attention of scientists around the world, and have spurred the race to find a less drastic way than gastric bypass surgery to block ghrelin.

Recently, Cummings showed off a test tube. “At the bottom of this tube is a little tiny fleck of stuff, which is pure dried ghrelin,” he says.

What would happen to someone who ate that tiny bit of ghrelin?

”Ghrelin is the first and only yet-described appetite-stimulating hormone,” says Cummings, explaining that ghrelin is mainly created in the stomach, where it circulates in the blood, eventually sending a message to the brain to stimulate appetite.

Cummings and his team studied ghrelin levels in obese dieters and in people of normal weight. They found that people who lost weight through dieting actually had elevated levels of ghrelin - not just occasionally, but day and night, whenever it was measured.

"Implication is that this is one of the ways in which the body fights against weight loss," says Cummings, which might help explain why millions of yo-yo dieters can’t keep the weight off.

One of those dieters is Hillary Bargar Strackbein, a Connecticut prosecutor.

But that’s not all. She also went on the Jenny Craig diet: “I lost about 100 pounds, gained it all back ... then there's the the Atkins diet. I was on a grapefruit diet, soup diet."

Basically, she’s been dieting pretty much all of her life.

Three years ago, Bargar Strackbein tipped the scales at 255 pounds. At that weight, she was ashamed to appear in court.

Most recently, she put herself on a virtual starvation diet, eating only one 700-calorie meal a day. By living mostly on soy burgers and omelettes, and by exercising daily, Bargar Strackbein lost more than 100 pounds.

Even so, her weight kept creeping back up, so she contacted Cummings about his research.

What he told her was actually a relief: “He said, ‘The reason you feel your body’s trying to gain weight back is because it is. Your body is against you.’ It was the first time I ever saw a doctor or anyone say, ‘You’re right. I believe you. You’re not bingeing. You’re doing what you’re doing and it’s still not working right.'"

So, is Bargar Strackbein fighting a losing battle? Cummings says she may be: “I have to say that just playing the numbers, I would predict that she will not be able to maintain that weight loss, but I encourage her to try.”

He says that’s because each of our bodies has a genetic set point. In effect, your genes establish your weight range, and puts you in a body weight ballpark.

"Within that ballpark, you can slide up or down about five or 10 percent, with dieting and exercise and the use of a few available medications we now have,” says Cummings. "And for most people, not much more than that is attainable or sustainable.”

So, are we battling biology or bad habits? British obesity researcher Stephen Bloom says both.

“We are machines designed to live through famine,” says Bloom. “In the days when we evolved, there would be a good harvest for six years and a bad harvest in the seventh year. And the only people who lived through the seventh year were the ones that were overweight. So, if you were able to watch your weight very nicely, you aren’t here anymore. We are survivors of the obese. All we need is a plentiful supply of food and we gain weight. That’s the way we are made.”

At London’s Imperial College, Bloom and his team are also studying ghrelin. But recently, they began experimenting with another hormone called PYY-336. You could almost call it the anti-ghrelin because this hormone makes you feel full.

In Bloom’s study, hungry human volunteers were given PYY, and then offered an all-you-can-eat lunch. Researchers measured the leftovers, and found there was a lot left over. In fact, the test subjects ate one-third less for the full 24 hours after receiving PYY.

The theory is, ghrelin goes to the brain and hunger sets in. "The ghrelin's disappeared after a meal, but the hormone to stop you eating, PYY, has risen in the bloodstream," says Bloom. "And as long as it's high, it stops you feeling hungry."

The evidence on ghrelin and PYY has so convinced Bloom that he’s practically given up on the common prescription of “eat less, exercise more.” He now says obesity has to be treated like any other illness, with medication.

A diet expert advocating a magic pill for losing weight? “I hate it," says Bloom. "But I can’t think of anything better."

A magic pill that is safer and more effective than what’s on the market now would be worth billions of dollars to pharmaceutical companies.

60 Minutes II got a rare look into a laboratory at Eli Lilly, where Dr. Mark Heiman, whose team first establishe that ghrelin made rodents hungry, is leading the search for a ghrelin blocker.

He showed us a sample of just one of the substances being tested that may be a potential weapon for keeping weight off.

The ingredients of that powder are top secret, of course. And with the stakes so high and competition so fierce, drug manufacturers almost never allow cameras in.

Under a microscope, Heiman showed us ghrelin cells in the lining of the stomach. The fact that ghrelin is manufactured in the stomach, not in a riskier area like the brain, makes researchers hopeful that they can come up with a blocker.

But don’t look for that magic pill soon. “This is a long, long process,” says Heiman. “It would probably be about ten years before it’ll be in the pharmacist’s shelf."

Doctors Heiman and Cummings hope to test the ghrelin blocker on people like Matt Heineman, 29, who suffers from a rare genetic disorder called Prader-Willi syndrome.

In other words, they literally eat themselves to death.

It’s a condition, she says, that forces parents to act like jailers. To fight his uncontrollable urge to eat, Matt’s mother locked the refrigerator and cupboards, and monitored Matt wherever he went.

Even now, as an adult, Matt has to live a “safe house.” 60 Minutes II visited one outside St. Louis, where everything in the kitchen is kept locked and counselors search residents for unauthorized snacks and weigh them twice a day to make sure they’re not sneaking food.

Cummings has found that ghrelin levels in people with Prader-Willi are off the charts: “We examined ghrelin levels in these people and found them to be among the highest that have yet been recorded in any humans.“

As one sufferer puts it, it feels like piranhas are in your stomach all the time.

The thinking is that if a ghrelin blocker can cut the appetite of people with Prader-Willi syndrome, it could help others with less severe obesity problems.

But don’t get your hopes up yet. This isn’t the first time the Holy Grail of weight loss has appeared to be close at hand. Some earlier remedies have led to serious and sometimes deadly side effects.

The St. Louis researchers injecting mice with ghrelin are looking at other aspects of the hormone. Early evidence indicates ghrelin also may affect memory as well as growth and appetite. A ghrelin blocker could have an effect on all of those things.

So, is there ever going to be a magic pill that is going to make us as thin as we want to be?

“I don’t think that there’s ever going to be a single medicine that would prove to be the magic bullet for all people," says Cummings. "But I think there’s reason for hope that we may have, one day, half a dozen magic bullets that can be used in combinations to help people with their body weight in much more powerful ways than we now can do.”