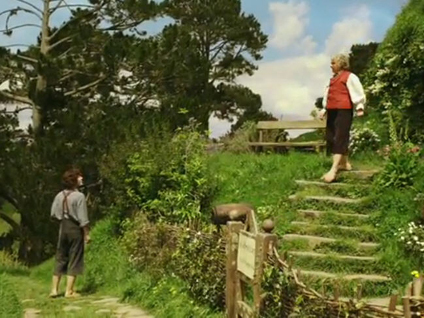 (CBS) A trailer for Peter Jackson's "The Hobbit: An Unexpected Journey" was released Tuesday, a year ahead of the film's release.

The much-anticipated teaser starts with Ian Holm as the elderly Bilbo Baggins, writing to his nephew Frodo.

"My dear Frodo, you asked me once if I had told you everything there was to know about my adventures," he says. "While I can honestly say I have told you the truth, I may not have told you all of it."

It then flashes back to a younger Bilbo (Martin Freeman), who is approached by Gandalf (Ian McKellan) and invited to go on an adventure.

Along with McKellan, other actors reprising their roles from the "Lord of the Rings" series include Andy Serkis as Gollum, Orlando Bloom as Legolas, Cate Blanchett as Galadriel, Hugo Weaving as Elrond, Christopher Lee as Saruman and Elijah Wood as Frodo.