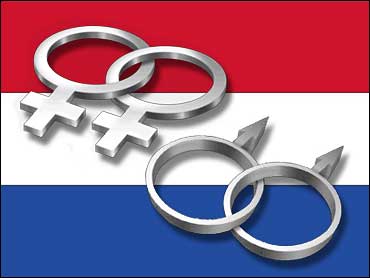 Three years after Amsterdam's mayor officiated at the Netherlands' first gay wedding, the gay marriage rate is falling, the first divorces are being registered and the issue has disappeared from the political agenda.

While the United States is engaged in debate on a constitutional amendment banning gay marriage, Canadians are discussing a federal law to legalize it and many European countries are adopting civil unions for gay couples.

But in the Netherlands, nobody talks about the issue anymore.

"It's really become less of something that you need to explain," says Anne-Marie Thus, who in 2001 married Helene Faasen. "We're totally ordinary. We take our children to preschool every day. People know they don't have to be afraid of us."

Around the world, countries are coming to terms with how to treat homosexual couples - and the trend in many is toward liberalizing laws.

In Denmark, civil unions with the same rights as marriage have been around since 1989, and other Nordic countries followed suit in the 1990s.

The Dutch were the first to eliminate any distinction between gay and straight, striking all references to gender in the marriage laws. Belgium soon did the same.

Canada jumped to the forefront of gay rights in North America in June when it announced plans to legalize same-sex marriages. Many same-sex couples streamed north to marry in Ottawa and British Columbia after courts in those provinces authorized weddings.

In most of Africa, homosexuality is illegal and gay marriage unthinkable. But in South Africa, gay rights were enshrined in the post-apartheid constitution and some groups are lobbying for the right to marry.

In Japan, homosexuality is no longer considered a mental illness, but many gays still feel pressure to go through a sham heterosexual marriage. Japan is more progressive than most of Asia.

Strongly Roman Catholic countries such as Spain and Italy refuse to recognize gay couples, following the Vatican's abhorrence of homosexuality. But there are important exceptions.

In Portugal, and in Spain's Navarra and Basque regions, gay couples who live together long enough receive the same benefits as heterosexuals under common law unions. In Argentina's capital, Buenos Aires, gay couples can register for a civil union.

France and Germany have civil union laws, and Britain is in the process of adopting them.

The Dutch have watched the hoopla in the United States with some bemusement. Amsterdam Mayor Job Cohen, who married six couples at the stroke of midnight on April 1, 2001, when the Dutch law took effect, sent a note of support to Gavin Newsom, the San Francisco mayor who set off a rush to California when he officiated same-sex ceremonies.

In contrast to Amsterdam's boisterous gay clubs and the spring rite of the Gay Pride parade through its famed canals, Faasen and Thus, the Dutch lesbian couple, live a quiet middle-class life in a neat apartment on the city's outskirts. They hardly seem like revolutionaries, or even trendsetters.

Faasen is a notary and Thus works part time in a home for the elderly. The couple have a 3½-year-old son, Nathan, and 2-year-old daughter, Myrthle. Faasen adopted the two, who are Thus' biological children.

Their reasons for marrying were prosaic.

"With marriage, you have a whole range of legal issues settled right in one go," Faasen says, scooping up Myrthle. "Child care, life insurance, health insurance, pension, inheritance. Otherwise you're left taking care of those things bit by bit, where it's possible."

In typical Dutch fashion, the marriage law was debated for years before it was finally enacted without fanfare. Government statistics show 2,400 same-sex marriages took place in its first nine months, compared with 1,500 last year.

Marten van Mourik, a law professor at the Catholic University of Nijmegen, says the declining rate of same-sex unions vindicated his opposition to the change in the law and shows it was unnecessary since civil unions were already legal.

"You don't change an institution with such a long history from one day to the next just to satisfy the whim of one group of people," he says. "Marriage is a relationship between a man and a woman intended to produce children. You can't get around that."

But he concedes there is no political support for reversing the law, even though the government is now led by the Christian Democrats, which had opposed the legislation.

Henk Krol, editor of the magazine Gay Krant, argues civil unions are an intermediate stage on the way to full marriage rights for gays, which he says are inevitable.

"A civil union is a second-rate marriage," he says. "People want a honeymoon. Not a trip to celebrate a registered partnership."

He says those who oppose gay marriage for religious reasons often soften their thinking when they realize they won't be forced to accept gay couples joining their church.

"It's an issue of separation of church and state," he says. "We don't have gay marriage here. We have civil marriage, and it's the same for everyone."

But Thus, who was raised Catholic, said the fact of her marriage itself has helped win over religious people.

"Especially for religious people, marriage makes a statement that 'this is someone I love and will grow old with'," she said.

"When you're just 'partners' or 'living together' they think ... you know, every day a new lover'. With marriage, the commitment is real, and they believe it."