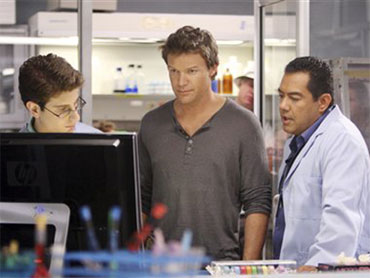 Detective Jim Longworth will soon find out what Florida residents and visitors have known for a long time: It's a weird place.

"The Glades," a police drama set to premiere July 11 on A&E (10 p.m. EDT), follows a Chicago detective who relocates to South Florida, expecting to slide into a cushy job with plenty of time to hit the beaches and golf courses. But he quickly realizes that life isn't going to be as simple or as relaxing as he thought it would be.

Besides being set in South Florida, the show is filmed in the Fort Lauderdale area. Most Florida-themed shows, like "CSI: Miami," are filmed primarily in California. The USA Network's "Burn Notice," which recently began shooting its fourth season in Miami, is the only other show filmed totally in Florida.

The Glades' creator and executive producer, Clifton Campbell, grew up near Miami and knew he couldn't capture South Florida's essence anywhere else.

"I've noticed a lot of shows that try to be set there without actually shooting there, and it's always sort of rankled me a little bit," Campbell said. "So I decided that I wanted to set a show there, not just in South Florida, but in my South Florida, the part of the world that I grew up in, that I think is just as stunningly attractive and interesting and weird and cool as South Beach."

Clifton's South Florida, for the purposes of the show, is the fictional town of Palm Glade. As a detective with the Florida Department of Law Enforcement, the show's protagonist covers an area that includes beautiful beaches and gator-infested swamps.

By filming in South Florida, Campbell said the environment will be like another character. Soundstages were built in an industrial space in Pembroke Park, a Fort Lauderdale suburb, but Campbell said they generally shoot outside on location five days a week.

Campbell acknowledged that they probably could have faked Florida in California or somewhere else, but they wouldn't have been able to do nearly as much location shooting.

"I don't know if the entire world or country would notice the difference, but anyone who's been to Florida would know," Campbell said. "You could cheat it and get away with it. But that's what you would be doing, getting away with it."

Regardless of the setting, the show's success or failure could ultimately hang on how audiences respond to its lead, Matt Passmore.

As an Australian, Passmore said he's just as much a fish-out-of-water as Longworth.

"I'm an Aussie playing a Chicago cop who's down in Florida," Passmore said.

After appearing on several television series in his native country, Passmore came to the U.S. to shoot a pilot for Fox. It didn't get picked up, but that cleared the way for him to land on "The Glades."

"When this script came along, the characters kind of jumped off the page," Passmore said. "It wasn't your average cop show. And this character, it just looked like there was a lot of fun to be had."

Despite the fun Passmore is having, his character might not be so lucky. In the series premiere, Longworth gets pulled away from the golf course when he has to investigate a decapitated body found in a swamp. Other distractions in subsequent episodes include a corpse inside a plane on a nature preserve and a man found dead at a bikini contest. All the while, Passmore's character is trying to kindle a romance with a medical student and single mother played by Kiele Sanchez.

While hiring an outsider to play an outsider, producers have filled the cast with quite a few Floridians.

Carlos Gomez, a Cuban actor who grew up in Miami, has been working in television and film for more than two decades. Now he's playing a Cuban character named Carlos Sanchez, the medical examiner at the FDLE substation.

"It's Carlos playing Carlos," Gomez said. "It's really coming home. I've worked in Florida a few times doing different projects. ... Being in Florida, seeing the sights, I have family here, so I get to see them more often. It's really cool."

Producers have also cast many local actors for minor parts, one of whokm became regular character.

Clearwater resident Jordan Wall auditioned for the pilot in Tampa last year. The 25-year-old was supposed to appear as an outside expert for a single case, but producers liked him so much while shooting the pilot last spring, they told him they wanted him back.

"I figured, best-case scenario, I'd be a recurring character and come back every now and then," Wall said. "Never did I see it coming as a contract role, where I'd be guaranteed for so many episodes a season."

Wall will appear as a series regular, playing a crime lab intern. Wall said he plans to go to Los Angeles after shooting finishes for the first season's 13 episodes.

"This is certainly the largest job I've ever done," Wall said. "I'm young, and I have to get out there now, while I've got this going. And hopefully I'll be back for a second season."

"An exciting TV show is not necessarily going to come to the attention of corporate executives or meeting planners or travel advisers," Grossman said. "But it does heighten awareness of this destination, of greater Fort Lauderdale."