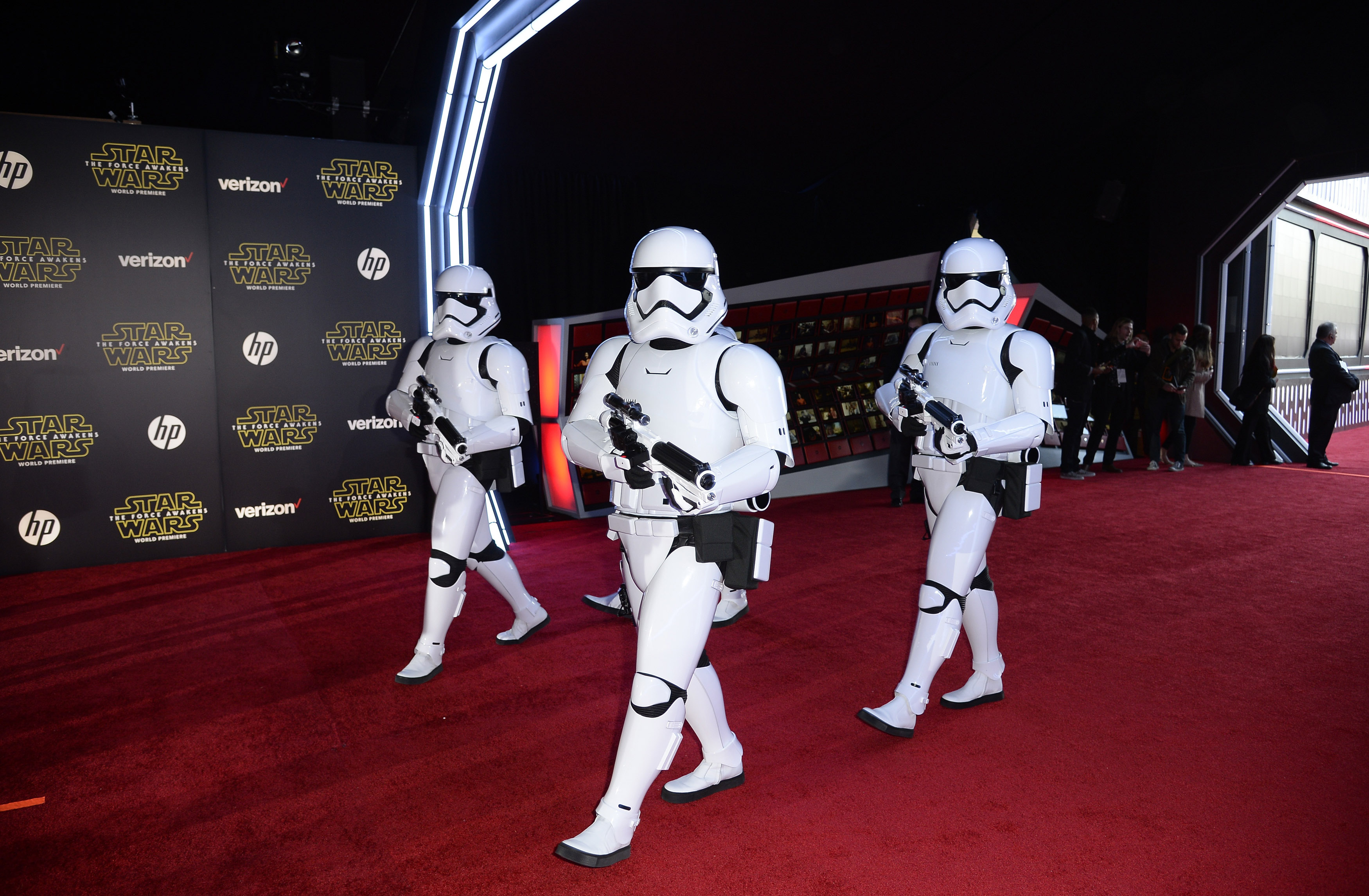 As far as Wall Street is concerned, "Star Wars: The Force Awakens" is already a hit for the Walt Disney Co. (DIS).

Disney shares have gained more than 19 percent since the start of the year, far outpacing some its competitors, and Wall Street is betting that the newest "Star Wars'" film will smash box office records and earn huge profits for the entertainment giant.

Estimates for the opening box office for "Star Wars: The Force Awakens," which debuted yesterday, range from $180 million and $220 million. Though some Hollywood insiders told Deadline Hollywood that the film could earn as much as $300 million, veteran box office tracker Paul Dergarabedian of Rentrak isn't willing to go that far because no film released in December has ever grossed more than $100 million. Nonetheless, he expects it to be a huge hit.

"It's probably the most hyped movie ever," said Dergarabedian, who has tracked movie box office returns for more than two decades, in an interview. "This sets the stage and the tone for the franchise's future success."

According to Macquarie Securities, the film could gross $2 billion in global box office receipts, ranking third in history behind "Avatar" and "Titanic" and generate merchandise sales of $5 billion. The company could earn $500 million in licensing and publishing revenue alone, the firm says, adding that its estimates may prove to be conservative. Initial reviews of the film posted on Twitter have been overwhelmingly positive. Advanced ticket sales are the biggest in the 15-year history of Fandango, according to the company.

"Theater owners are scrambling to add show times to the demand of fans," said a Fandango spokesman.

"The Force Awakens" had its premiere in Los Angeles yesterday at three theaters on Hollywood Boulevard, which is big even by Hollywood standards. Speaking to CNBC, Chief Executive Bob Iger said that the movie exceeded the company's expectations.

Iger spearheaded the company's 2012 $4 billion purchase of Lucasfilm, the production company founded by "Star Wars" creator George Lucas, and has been whetting the appetite of fans ever since with the help of creative marketing

For instance, the company's theme parks sell action figures of the Muppets (which came under the Disney corporate umbrella thanks to a 2004 acquisition) dressed in "Star Wars" costumes. The media and entertainment giant also plans to break ground on "Star Wars" areas at both Walt Disney World Resort in Florida and California's Disneyland park next year.

Whether the "good news" about "Star Wars" is baked into the share price is hard to say. The shares recently traded at $112.88, more than 5 percent under the average 52-week week price target of Wall Street analysts, which is $119.

Indeed, shares of Disney have gained more than 200 percent over the past 5 years, outperforming its peers such as Time Warner (TWX), which reported a gain of 116.8 percent and 21st Century Fox (FOXA), which surged by more than 117 percent.

The release of the movie comes at a critical time for Disney. Wall Street has fretted for months about "existential" threats to the media industry posed by cord-cutters -- industry jargon for customers who quit their pay television service. Cable television ratings have been plummeting on many networks including ESPN, which has long been a cash cow for the company. The sports cable network recently reported a 3 percent subscriber decline in the latest fiscal year, which unnerved Wall Street even though Disney off-set these declines with increases in affiliate fees.