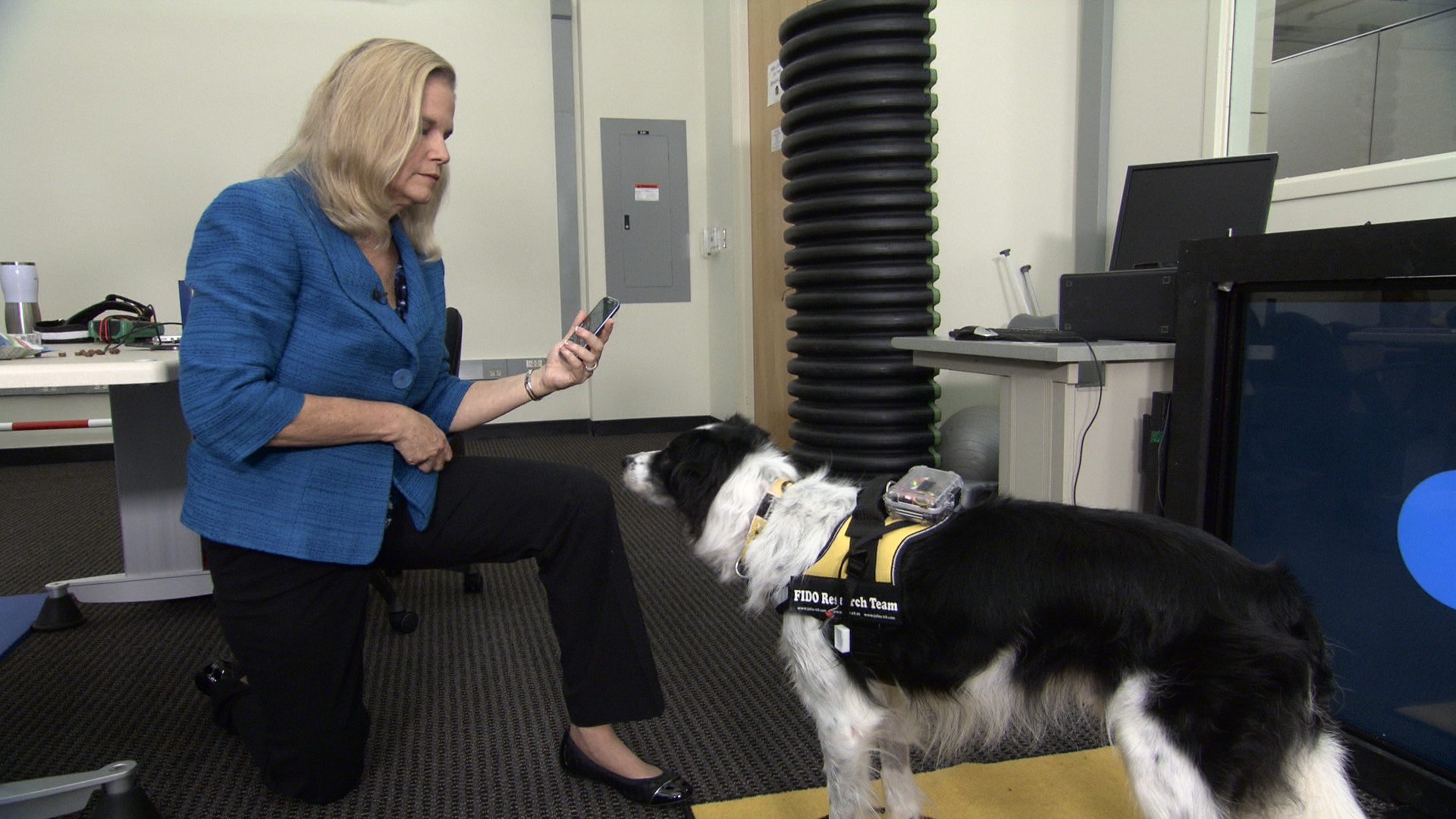 "The dog knows that he's supposed to hit these icons in a very specific order," explains Jackson, director of Georgia Tech's Animal Computer Interaction Lab. "There has to be a very deliberate activation because you might be calling 911 or maybe you are having a medical emergency."

CBS News was the first to ever film this particular component of The FIDO Project (FIDO stands for Facilitating Interactions for Dogs with Occupations) -- and it's going remarkably well. When Jackson asks for help, Sky knows to use the touch-screen in a particular pattern, and the screen is programmed to send a text alert. One can quickly see how useful this technology could be to someone in true distress.

It's these sort of potentially life-saving interactions with man's best friend that Jackson and her team are working on from their third floor lab full of electronics and dog toys. They hope these technologies will allow working dogs -- like assistance dogs for people with disabilities, police dogs and military dogs -- to communicate better with their human handlers.

Jackson, a computer scientist and lifelong dog trainer, and her colleague, Dr. Thad Starner, a pioneer in the wearable computing field, began the project in 2013. Their original study won best paper at the International Symposium on Wearable Computers. The original idea was create vests for dogs, outfitted with lightweight computers and sensors that can be operated by means of the animals' natural abilities -- tugging, biting and pulling.

In another demonstration, Jackson and Sky showed off was what's called a discrimination task, where a dog is trained to know the difference between a normal, everyday sound, like a doorbell, versus an important sound, like a fire alarm. Each side of the dog's vest has proximity sensors much like those on a fancy kitchen faucet that turns on and off with the wave of a hand. When the doorbell rings, Sky turns his head to the left and activates a sensor, which cues an automated message: "I heard the doorbell," and a text to the owner's phone reading "Doorbell." When Sky hears an alarm, he spins to the right side of the vest instead, triggering the Siri-like voice to announce, "I heard an alarm," along with an "alarm" text message. For a hearing impaired owner, knowing the difference ranges from convenient to critical.

When Jackson calls out for help in a different setting, Sky pulls a cord on his vest, activating its speaker. "Excuse me, my owner needs your help," says the pre-recorded voice. For people who could become incapacitated quickly, like those suffering from epilepsy, the technology could be a game changer. And it could be customized for different users' needs. "We could have any number of things in [the computer], including texting your family or calling 911 with your location," Jackson says.

Jackson says that while traditional working dog breeds, like border collies and German shepherds, are more adept at picking up the training, there's still hope for pet owners who've struggled to get their pooch to fetch the paper. During the team's testing, the longest it took any dog to learn basic interactions with the vest was about half an hour. The shortest? Twenty-seven seconds -- that record just happened to go to Sky.

If you're wondering when some of these gadgets might be available next to the chew-toy aisle, it could be sooner than you think. The most expensive piece of equipment they're using is the custom-made vest that costs around $100. The computer parts are mostly off the shelf, but the knowledge and code built into them doesn't come with a price tag. "We're not interested in making money on it -- we want to get it out there for the people that need it," Jackson says. "Dogs have information that they have no other way to share with people."