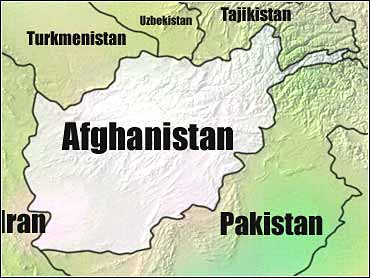 Call it war Afghan-style. Loyalties - like the front line - are fluid.

The terrorist attacks in the United States have focused attention on the war between Afghanistan's ruling Taliban - the hard-line Islamic leaders sheltering prime suspect Osama bin Laden - and the northern alliance of opposition parties the Taliban ousted to take control of the country.

But despite the daily reports of fighting in towns with tongue-twisting names, the big military victories in the conflict have come through changes in loyalty rather than success on the battlefield.

For all the tanks, heavy artillery, helicopters, aging jets and surface-to-surface missiles in their arsenals, both armies are mere bands of guerrilla fighters.

And though both sides have claimed military gains in recent weeks, it is intrigue and duplicity that lie at the heart of the Afghan style of fighting.

The Taliban emerged in Afghanistan in 1994, seizing power two years later and ousting then-President Burhanuddin Rabbani, whose government was a collection of warring groups that destroyed much of Kabul and killed an estimated 50,000 people, mostly civilians. The former enemies are now united under the banner of the northern alliance.

Since then, the two sides have been fighting off and on, with little change in the strategic balance, in the same area - the northern provinces of Balk, Parwan, Kapisa, Samangan and Takhar.

In recent weeks, both sides have claimed gains and losses, better coordinated assaults and better positioning of soldiers in strategic locations like the oppoition-controlled Panjshir Valley.

But there are no experienced foreign military analysts in Afghanistan to confirm any of the claims. And Afghans inside the country say that despite recent fighting, the old front lines have remained largely unchanged.

Western and Pakistani sources estimate that the Taliban can field about 40,000 fighters, including about 10,000 Arabs, Pakistanis, Chechens, Uzbeks and others from bin Laden's al-Qaida movement.

Fighters on both sides, shod only in sandals, slog through mountain passes carrying rocket launchers on their shoulders and prodding reluctant mules onward with food supplies and ammunition.

Offensives usually consist of blistering artillery and rocket duels waged just miles apart, and precision is not the strength of either side. They generally fire in the direction of their enemy - even if there's no one in sight.

Territory changes hands when one side gets tired of being on the receiving end of long-range rocket and artillery fire, and then flees. Then the cycle is reversed, thus the many seesaw battles in this relentless civil war.

In winter, when mountain passes become clogged with snow, fighting generally slows to a halt. Resupplying by land becomes difficult, and low cloud cover makes it hard to restock by air, as well.

Bases are generally caves, old railway cars buried in the ground or abandoned villages. When the Taliban took control of Kabul on Sept. 26, 1996, the government leaders - now the opposition - jumped into cars and tanks and drove away.

They hunkered down in their Soviet-era bunkers and have been there ever since.

It is duplicity and shifting loyalties that have wrought the biggest gains in warfare.

Last year, the Taliban stormed Taloqan, the capital of northern Takhar province and headquarters of the opposition, with thunderous artillery barrages and even airstrikes.

But they eventually seized the town with money, not guns, paying opposition commanders millions of dollars to switch sides with money rumored to have come from bin Laden.

That style of cash-register warfare was at play in the capture, fall and recapture of the strategic northern city of Mazar-e-Sharif.

The Taliban swept into the city in 1997 after befriending Uzbek warlord Abdul Malik. The takeover came with hardly a fight: The Taliban simply wooed Malik away from his ally Rashid Dostum, a former general in the old communist army and an Uzbek warlord himself.

Taking up an offer of money and power, Malik killed a few of Dostum's close aides, won over others and forced Dostum to flee to Turkey

But Malik tired of his friendship with the Taliban after they refused to name him northern commander in chief.

A few days after the fall of Mazar-e-Sharif, Malik changed sides again. His soldiers joined with the Shiite Muslims who dominate Mazar-e-Sharif, trapped the Taliban troops inside the city and massacred hundreds.

They also captured 2,000 Taliban soldiers, allegedly killing them by forcing the troops to jump into deep wells and then tossing grenades in behind them.

A year later, Dostum was back in Afghanistan, Malik was hiding in Iran and the Shiites were on their own in Mazar-e-Sharif.

The Taliban returned - and then carried out a retaliatory massacre of hundreds of Shiites.

In the changing fortunes of Afghanistan's warlords, Dostum today is a main commander in the ranks of the United Front, better known as the northern alliance.

Malik, who is also part of the northern alliance, is being kept at a safe distance from Dostum. He is believed to be in the Panjshir Valley, headquarters of the alliance's military commander Ahmed Shah Massood, who was mortally wounded by a suicide bombing two days before the Sept. 11 attacks in the United States.

By Kathy Gannon © MMI The Associated Press. All Rights Reserved. This material may not be published, broadcast, rewritten, or redistributed