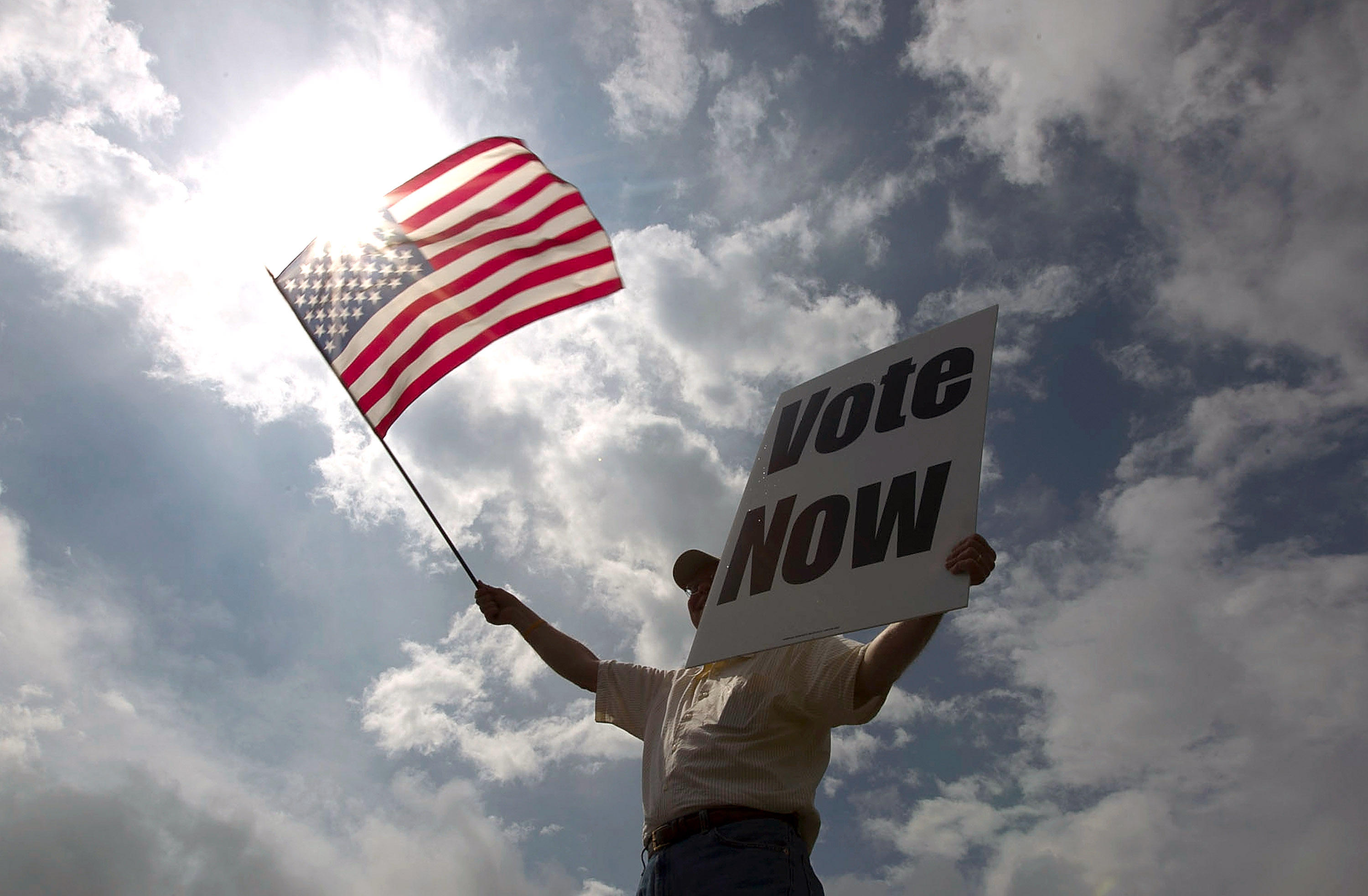 Though 2017 is shaping up to be a tumultuous year in the world of American politics, the attention has all been focused on Washington, not on the campaign trail.

But despite the lack of either a presidential race or midterm elections, 2017 is not completely devoid of elections -- and in fact, there are a handful of important ones on the calendar this year.

From dozens of mayoral races in major cities across the country, to two bellwether gubernatorial races -- including one in Washington’s backyard -- there will be multiple opportunities for electoral drama this year. And as the country heads toward what are certain to be combative midterm elections in 2018, these 2017 races will provide a rare window into the political fortunes of President Donald Trump in the first year of his term.

Here’s a CBS News rundown of some of the top elections to watch in 2017:

With several members of Congress resigning their posts to take up jobs in the Trump administration, there are a handful of seats in the U.S. House that need to be filled -- five, in fact.

And none has been receiving more attention than the race for Health and Human Services secretary Tom Price’s seat in Georgia, where Republicans are worried a fractured GOP field and an all-party primary could give a relatively unknown Democrat the victory next month.

Price’s 6th district seat, which includes the Atlanta suburbs, voted reliably to reelect him in November: he defeated his Democratic opponent 62 to 38 percent. But his district, which voted for Mitt Romney over President Obama by 23 points in 2012, only picked Trump over Democrat Hillary Clinton by 2 points in 2016 -- a shift which supports the theory that Georgia’s demographics are making it a little bit bluer each year.

John Ossoff, a 30-year-old Democrat, has benefited from a fractured Republican field in the non-partisan jungle primary on April 18. Ossoff has consistently led in polls of the 18-candidate field (11 of the candidates are Republicans) -- a FOX 5 Atlanta poll put him at 40 percent last week, a 20-point advantage over the other candidates in the race. National Democrats are taking notice: Ossoff has raised more than $4 million, a major sum for a Democratic House candidate in a red district. Were he to win, Ossoff’s victory would be seen as the first repudiation of Mr. Trump’s presidency.

National Republican groups like the NRCC are pouring money into ads there in an effort to diminish Ossoff’s support. Because of Georgia’s election system, if Ossoff were to reach 50 percent in the first round of voting he would win outright; if he doesn’t hit 50 percent, he’ll face the second-place candidate in a June runoff election, which would be considerably tougher for a Democrat to win.

Remember Bridgegate? The voters of New Jersey do.

Back in 2013, when just the earliest details of the scandal were emerging, New Jersey Gov. Chris Christie was easily reelected with 60 percent of the vote -- but the scandal broke open just months later, taking Christie from a top White House contender to a second-tier candidate. His approval rating in New Jersey is now at 20 percent -- which, incredibly, is actually an improvement over where it stood earlier this year.

Like Virginia, the race in New Jersey is wide open: there are likely to be crowded primaries on both sides of the aisle in June, and there doesn’t appear to be a clear favorite to win in November. Still, as in Virginia, the race will likely be seen as a referendum on Mr. Trump’s first year in office.

The Republican field includes Kim Guadagno, Christie’s lieutenant governor, and state assemblyman Jack Ciattarelli, among others. And there’s one potentially intriguing prospect for the primary: Joe Piscopo, the former “Saturday Night Live” writer and star, who has called Mr. Trump a “once-in-a-lifetime candidate.”

In the Democratic primary, state Rep. John Wisniewski has worked to fashion himself in the progressive mold of Sanders. Among his declared rivals is Phil Murphy, a Goldman Sachs alum who served as Obama’s ambassador to Germany.

Anyone looking to discover whether Mr. Trump’s presidential victory was a one-off occurrence or indicative of a larger populist theme in America should look to the Virginia gubernatorial race, where each party is currently battling out its own version of the populist-versus-establishment fight.

With Democratic Gov. Terry McAuliffe term-limited, many assumed his No. 2, Lt. Gov. Ralph Northam, would easily take over the mantle of Democratic nominee to replace him. However, former U.S. Rep. Tom Perriello, a one-term congressman who served in Obama’s State Department, is striking the same populist and progressive tones that made Bernie Sanders successful -- and getting some attention in the process.

On the GOP side, a similar narrative is playing out: former RNC Chairman Ed Gillespie, a longtime political strategist and D.C. player, has been prepping a gubernatorial run essentially since he lost Virginia’s Senate race by a narrower-than-expected margin back in 2014.

But Corey Stewart, who served as Mr. Trump’s campaign chairman in Virginia, has argued that Mr. Trump’s victory opens up opportunity for a new type of candidate. He’s even taken up Mr. Trump’s habit of coining catchy-yet-negative names for his opponents, referring to Gillespie as “Establishment Ed.”

“You can be profane. You can be politically incorrect,” Stewart said, according to the Associated Press.

The outcome of each of these primaries -- and then of course of the general election, in battleground state Virginia -- will be seen as a bellwether for national political trends in the post-Trump age.

Incumbent New York City mayor Bill de Blasio has not had an easy tenure since he took the helm of America’s largest city. He’s been the subject of overlapping investigations into his fundraising practices, has watched the city’s homeless population explode, frequently spars with his fellow Democrat and New York governor Andrew Cuomo, has never been particularly popular, and has a famously testy relationship with the local press.

Yet despite all that, not to mention an effort by allies of former Mayor Michael Bloomberg to recruit a viable challenger, de Blasio looks like he won’t have much by way of opposition in either the Democratic primary or the general election. Democrats outnumber Republicans six-to-one in the city, which means the GOP faces a major uphill climb in unseating him, especially with telegenic GOP councilman Eric Ulrich saying he won’t run. Meanwhile, the two most prominent Democrats flirting with a bid, Brooklyn Congressman Hakeem Jeffries and Comptroller Scott Stringer, now appear all but certain to sit this election out.

Plus, de Blasio was recently cleared in the fundraising probes by the U.S. Attorney’s office and Manhattan District Attorney Cy Vance, although the latter noted the mayor’s “transactions appear contrary to the intent and spirit of the laws that impose candidate contribution limits.”

The bottom line, though, is that de Blasio is still popular among African-American and, to a lesser extent, Hispanic voters. He’s delivered on some of his campaign promises, such as universal pre-K and a new push for affordable housing. And despite the predictions of his many critics, crime has remained relatively low, with New York holding on to its title as America’s safest major city.

Chances of an upset are therefore slim, although former NYPD detective and Fox News personality Bo Dietl is trying to gin up in a independent run for mayor. Perhaps best known for his bit parts in a number of Martin Scorcese projects, Dietl is trying to convince wealthy New Yorkers to support his candidacy against a man many of them despise. Should he convince some of them that he’s serious about beating de Blasio, and has the discipline to pull it off, there’s a chance Dietl does better than expected come November.

“If Bo gets strong sponsorship from influential people, I’ve told him I’ll do all I can to help him,” billionaire GOP mega-donor Ken Langone recently told The Daily Beast. “But nobody is going to throw money out the window.”

CBS News’ Will Rahn contributed to this story.