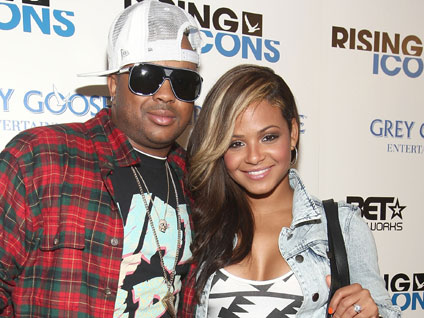 A rep for The-Dream confirmed the split on Monday, after pictures surfaced of the writer/producer embracing his assistant, Melissa Santiago, in the Caribbean over the weekend.

"Terius 'The-Dream' Nash is saddened to announce that his marriage to Christina Milian was unsuccessful," his rep told Us Weekly. "The couple reached this decision in late 2009, but decided to keep the news private in efforts to protect their baby daughter Violet. They ask for consideration and respect for their family moving forward,"

The-Dream, 32, proposed to Milian, 28, in July 2009. The two wed quietly in Las Vegas in September and then said "I do" a second time in Rome in December shortly before deciding to separate. They welcomed daughter Violet on Feb. 26, 2010.

Milian took to her Twitter account after the Caribbean pictures surfaced, writing, "Whatever you think, believe it."

The-Dream has three children from a previous marriage to singer Nivea.