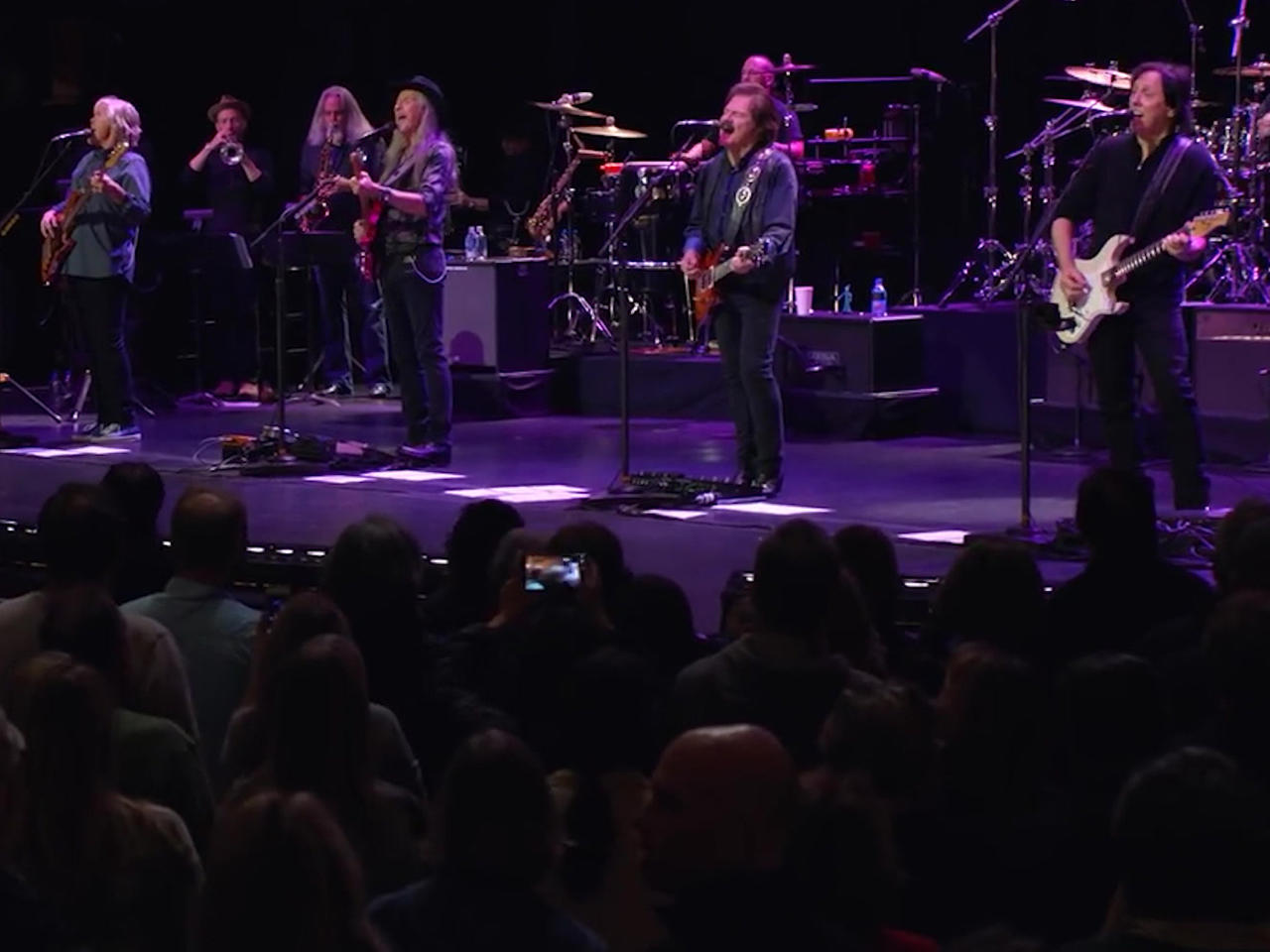 Considering they've been playing the riff for half a century, maybe it shouldn't be a surprise, but knocking the rust off never sounded so good, as this band tuning up in a rehearsal hall in Burbank. "A band like ours," said Patrick Simmons, "is a little different than a lot of bands, I think."

The Doobie Brothers are more than a "little different," selling more than 50 million albums over the last 50 years.

Correspondent Jim Axelrod said, "You can count on one hand and maybe have a few fingers left over the number of bands that have had that kind of longevity?"

While other members have come and gone over the years, Simmons, McFee, Michael McDonald and Tom Johnston – the core four Doobies – are all feeling pretty fortunate to still be playing together, and are not about to let the kind of resentments that broke up other bands (and threatened theirs) keep them from celebrating their Rock 'n' Roll Hall of Fame careers with a new tour.

McFee said, "I think, as dinosaur bands go, we get along better than a lot of 'em, too, you know?"

"That is a hell of a term you just coined," Axelrod said.

"We'll have a fight about that later," McDonald laughed.

Their story begins in 1970, in San Jose, California, where Johnston and Simmons met playing guitar.  Jamming led to booking some gigs, which then meant they needed a name. Simmons recalled, "This guy said, 'You know, you guys should smoke so much weed, you should call yourselves the Doobie Brothers.' 'Yeah, right. That's gonna fly!'"

Their hard-driving rock appealed to a crowd of bikers and hippies in northern California, as they reeled off a string of hits: "China Grove," "Black Water," "Rockin' Down the Highway."

It was all anyone who's ever strapped on a guitar and chased the rock star's life imagines, which is exactly when the trouble started.

"There really is no way for a bunch of guys in their twenties that are now having out-sized success to handle all of that gracefully, is there?" asked Axelrod.

"That's true. We didn't!" Johnston laughed. He was the first casualty, sidelined by a bleeding ulcer as the band was on tour. "I had to leave the band, unfortunately. I mean, I'd had the ulcer since high school." The rock star lifestyle, he said, "exacerbates the whole problem."

The Doobies needed to find someone fast. A few of them knew a keyboardist who was playing clubs in and around Los Angeles. McDonald said, "At that point, I was playing the Trojan Room in Glendale, yeah!"

McDonald's life would never been the same. Nor would the Doobie Brothers, when it came time to record their next album. "I started to kind of bring in songs that were at that point kind of, you know, in varying degrees of being finished," he said. "'Takin' It To the Streets' was one of them."

The sound of The Doobie Brothers was shifting, and softening. When asked if he was aware of the change, McDonald replied, "Oh yeah, hyper-aware of that. And not in a good way. I felt like, Oh boy, you know? I'm gonna be the reason this whole thing turns to s**t!"

What it turned to was platinum. In fact, their 1979 album "Minute by Minute" went triple platinum.

At the studio where "Minute by Minute" was recorded, Axelrod asked Simmons, "[Were] you aware that this might really be huge?"

"I don't think you can ever predict those things," Simmons replied. "I think you can only say, 'This is accomplishing what I had in mind as a writer, or as a player.'"

One of the album's tracks, "What a Fool Believes," became the band's all-time biggest hit, winning a Grammy for Record of the Year.

Axelrod asked the group, looking back, "Is anyone saying, 'We are losing our soul of who we are, but we're so enormously successful, how do you balance this'?"

But "those days" are now more than four decades ago. These days, they've got better things to worry about. As Johnston explained: "Who's gonna sing what part? And what's that chord? I don't think anybody really cares about what ever happened back then. I know I don't."

"Can't even remember it, so it doesn't matter!"

Just this week The Doobie Brothers (minus McDonald) released their latest album, "Liberté," their first in more than a decade – songs not as much by artists from the '70s, as in their 70s.

You can stream The Doobie Brothers album "Liberté" by clicking on the embed below (Free Spotify registration required to hear the tracks in full):

Right now.  Back together, aware of the passage of time, but grateful for the way they still have to combat it. McFee said, "We're still able to do it, and people maybe want to hear it."

McDonald said, "When we get up there and Pat starts 'Black Water,' or we jump into 'China Grove' or 'Takin' It to the Streets,' and all of a sudden, we are 20 years old again, you know? And we're doing what we always did, you know?"