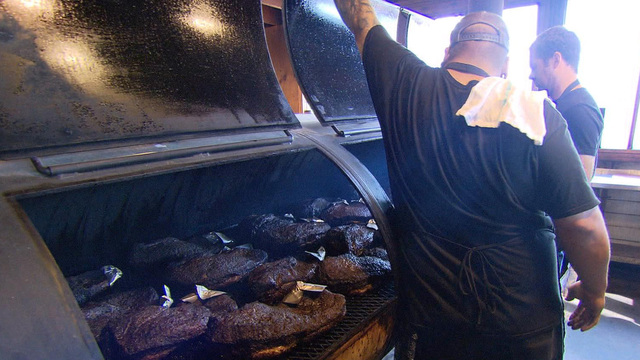 AUSTIN, Texas -- At the famous Franklin Barbecue in Austin, Texas the lunch line starts at 5:30 AM on a typical day, and everyone here comes prepared to wait, especially for the smoking beef brisket.

The owner, Aaron Franklin, greets the faithful at the door. The James Beard Award winner says all good Texans barbecue, but nobody does it quite like him.

Everyone here orders by the pound.

"We had a couple of hours today so we decided we could afford to sit in line," said customer Kellie Lawloss. Anywhere else, we wouldn't be willing to wait in line, but it's Franklins."

"Are you shocked to see all that craziness around barbecue?" CBS News' Vinita Nair asked Franklin.

"I mean, it's pretty nutty, if you really think about it. The line is super unintentional. We never planned on it. But people show up, and somebody wants to be first every day," said Franklin.

Aaron's first location was a trailer he bought on Craigslist for $300.00 which was parked off the side of I-35 in Austin which is where he started selling his signature brisket that he perfected in his backyard.

"Thirteen years ago, brisket was on sale at the local grocery store. I pretty much bought one and just built a fire and cooked it," Franklin said. He also claims he had no cooking knowledge and said, "that's what's fun about barbecue."

His first brisket "was disgusting, was horrible," he said. "It was tough. It was under seasoned. It was fatty not in the right ways. Like anything, you just keep doing it and get better at it."

These days his cookers smoke about 2,000 pounds of brisket a day. Each cooks for about to 16 to 18 hours.

The style is classic German-Czech where the temperature of the meat -- cooked by oak -- is thoroughly monitored.

"It's about a 24-hour process. So briskets go on. We just put briskets on for tomorrow's lunch. At 3:00 in the morning, ribs'll go on. And there's a real specific time for each cooker," said Franklin.

The biggest difference between traditional barbecue and this meat, which is priced at $20 a pound, is that it's hormone and antibiotic free. The fat is distributed more evenly, making the brisket soft enough to tear apart.

As Aaron sees it -- the line to get into his restaurant filters all of the grumpy people. By the time they get in most have made new friends -- and most have planned out exactly what they're going to eat.

Franklin admits that having such a large line at his restaurant does bring a lot of pressure with it, "'Cause you've got all these people showin' up before the food's even ready. What if you mess up? They're already here. We just keep our heads down and keep workin'. We're happy makin' food. And we're happy tryin' to make it the best we can."

There is no set closing time -- at Franklins, the door closes when the barbecue runs out. It happens every day.

"People always ask, like, "Oh, well, when you gonna franchise? Or when are you gonna get another location? Tsk, tsk. Never. We could never replicate what we're doing here."

"It'll ever only be on this street corner. It'll only ever be in Austin."