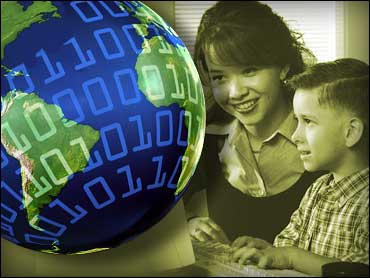 This story was reported by CBSNews.com's Jennifer Hoar


"Girls, finish your homework — people in China and India are starving for your jobs."

That's how columnist and author Tom Friedman advises his kids about what they're up against in the global job market.

The digital revolution has leveled the "playing field," Friedman says in his book "The World Is Flat." That means that information is exchanged and business is transacted over transparent borders, and at lightning speed.

The brave new wired world is truly unforgiving to the wired-less. That means there are demands on American teenagers that didn't exist decades ago. Access to and familiarity with the technology that has become the medium of global business is critical.

"Digital literacy is the way to win the game," says Angus King, former Governor of Maine and an advocate of technology in education.

WELCOME TO THE DIGITAL DIVIDE 2.0

For the past decade, the digital divide has referred to the disparity in technological access due to factors such as economics, race and geography. The Digital Divide 1.0 was defined primarily in terms of who has a computer and who is online, and who doesn't and isn't. And it was a domestic issue.

All of that remains relevant as long as there are "have-nots" in the digital democracy. However, the Digital Divide 2.0 model goes well beyond who does or doesn't possess 21st century hardware and software.

"It's not just about getting machines to kids," says Ken Kay, president of the 21st Century Partnership, an organization that emphasizes integrating communication and critical thinking and learning with technology. "The digital divide has been an equipment issue; we think about it as a skills issue."

In the flat world, you need technical savvy along with what Friedman describes as a "certain mental flexibility, self-motivation, and psychological mobility." The tools don't enhance the students; the students enhance the tools.

The digital divide framework is different now because inner-city kids need to be able to compete with suburban kids — and kids in Shanghai.

Wired schools have proliferated significantly since the mid-1990s. In fact, Web access is just about ubiquitous: a National Center for Education Statistics study shows that by 2002, 99 percent of U.S. public schools had Internet access.

For minority and low-income-household students, however, there still are small digital deficiencies. In schools with the highest concentration of students who qualified for free and reduced-price lunches, 95 percent of schools had broadband access, 4 percent lower than the figure for all public schools.

With laptop availability, the disparity between poor and wealthy schools was somewhat more pronounced. On average, 30 laptops were available to students in financially-disadvantaged schools while 43 laptops were offered to kids in wealthy ones.

While these differences are not severe, they still demonstrate that the fault lines in digital access exist along racial and socio-economic ones.

There are a number of initiatives under way across the country to bring e-quality to all. One innovation, the Maine Learning Technology Initiative (MLTI), has become a model in technology education.

Conceived by former Governor King during an unexpected budget surplus in 2000, MLTI provides wireless laptops for every 7th and 8th grade student and teacher in the state. It is the only program in the country with statewide "one-to-one" computer access.

"I knew when I proposed it," King says of the MLTI, "that it was big. Then, I knew it was radical. Now, I know it was necessary."

Jeff Mao, Maine's Coordinator for Educational Technology, says that the virtue of the program is it truly "levels the playing field." In a state where communities range from the wealthy Kennebunkport to Washington County, one of the poorest in the nation, it is quite a feat to provide kids from "polar ends of the digital divide" with the same thing, says Mao.

"The have-nots are getting to content … for educational purposes," Mao says, and this is important because "there are more resources available electronically than on paper."

What's more, Mao explains, the integration of tech resources and new teaching methods has helped students to be "more engaged and invested in their learning."

"Self-discovery for a student becomes faster and more visual on a computer," Mao says.

The pressure to educate globally-competitive students and, in turn, workers, affects school districts in this country regardless of socio-economic strata.

"Preparing students for the cutting edge is a challenge," says Sean Bulson, principal of the Bethesda Chevy-Chase High (BCC) School in the affluent suburbs of Washington, D.C. Globalization even puts pressure on schools like BCC, where students can surf the Web in a Cyber Café filled with sleek flat-screen computers and print out assignments they e-mailed themselves from home in a school computer lab.

But even for BCC, there is still a gap between where students are now and where they should be in 21st century skill-set readiness.

"The business community is looking for kids with the skills they're using," Bulson says of the job market that his students will face. The problem is, "schools are always a step behind what's going on in the business world."

Schools can best prepare students for their futures in college and in the workplace by "making technology not a separate subject but a tool used to educate," Bulson stresses.

After all, says Bulson, in today's workplace, technology is only one mechanism for critical thinking, written communication, problem-solving and teamwork skills. Technical literacy is important, but only as it enables students in cultivating those work habits. And this is true no matter what the profession.

"This is about how to think about your work and function in your work whether you're at Burger King or a major consulting firm," Ken Kay says.

It is one thing to be have a fiber-optic cable connection, it's quite another to know how to exploit its benefits. Teaching kids to understand and take advantage of the technology is the goal in the 21st century classroom.

"It isn't just an access issue," says Bob Pearlman, founder of the New Technology Foundation. Even for kids who are wired, "the problem (for them) is creating a social connection and skills."

Pearlman's Foundation started the New Technology High School (NTHS) in Napa, Calif., in 1996. The premise of the school is that through "project-based learning," students master a subject and convey that mastery in a tech-based format, anything from digital photography to Power Point slides.

The NTHS curriculum, Pearlman says, is devised to mold 21st century communicators and collaborators. After all, "to get anything done today, you have to work as part of a team and relate well to others," Pearlman explains.

"In a traditional model, you could get very good technically, but not have the totality of skills," says Pearlman; the project-based one "prevents" that limitation.

What is extraordinary about New Tech is that not only does it promote 21st century skills, but it is closing the digital divide in that it has brought technological resources to a community that was otherwise foreign to it. The primary demographic in the city of Napa is a manual labor force and 40 percent of NTHS students are minorities.

SHOW ME THE MONEY

"We keep new devices coming in, but we keep the legacy ones, too, because we don't know what money is coming in," says Stanley Johnson, the Instructional Technology Coordinator for Washington, D.C., Public Schools.

Federal funding is shrinking. The Enhancing Education Through Technology (EETT) program is one of the key sources for tech funding, especially for underserved school districts. Begun in 2001 as part of the No Child Left Behind Act, EETT has become crucial in putting technology into classrooms and improving tech-teaching and learning.

However, between 2005 and 2006, EETT grants decreased in all 50 states, even by as much as half in some. In the 2007 budget, the program is slated to be removed altogether.

For states in which EETT is the only technology funding schools have, dwindling subsidies can have a crippling impact.

"If not for EETT, we'd not be able to systematically support the things we've done so far," Johnson says of D.C. public schools, "we couldn't provide professional development and training or renew leases on equipment."

In West Virginia, a poor state that is nonetheless the Education Week's highest-rated state for technology leadership this year, Dr. Steve Payne, superintendent, said the state "would not be able to provide support to teachers" without federal money.

"You can't pull funding on educational technology and be successful in competitive initiatives," Wolf contends.

PREPARING FOR AN UPGRADE

While schools continue to make strides in bridging the Digital Divide 2.0, it is undeniable that students who have gadgets at home have advantages over students who don't. They simply have more opportunities to come up with useful and creative ways to use the technology for things as diverse as researching school projects, looking for jobs, and even gaming.

The challenge of getting high-tech resources into everybody's homes might one day give rise to the Digital Divide 3.0.

In the meantime, teens need to get plugged into the global network from wherever they can, and know what to do — and how to do it well — once they are there.