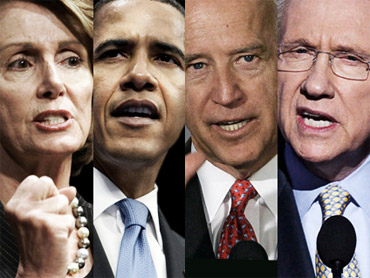 (CBS/ AP)
Since President Obama signed the $787 billion stimulus package in February, more than two million jobs have been lost and unemployment has hit its highest rate in a quarter century, 9.5 percent.

For Republicans, who have been seeking a message that will help the party regain some momentum, that's the sort of bad news that comes with a silver lining. Members of the GOP have been harshly attacking the opposition party as wasteful spenders whose expensive programs have had little positive impact.

"It's pretty clear now that the administration was wrong. The bottom line is this: The stimulus isn't creating enough jobs," Boehner said.

Defenders of the stimulus package say the situation would have been even worse without the legislation – and they note that nearly 90 percent of the stimulus money has not yet been spent. (The latter fact cuts both ways, of course: Stimulus defenders can point to it as evidence that the bill should be given more time to work, while critics can raise questions about why the money hasn't gone out faster.)

The Obama administration has dispatched Vice President Joe Biden to try to convince Americans that the stimulus is indeed making a difference. On Thursday, he went to Ohio and upstate New York to say he sees its impact everywhere he goes. 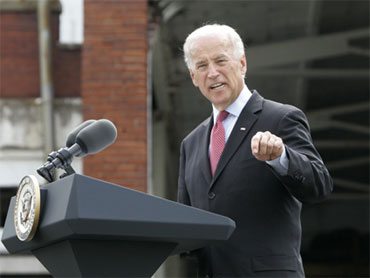 (AP)
"Communities being rebuilt, factories being reopened, workers rehired — teachers in their classrooms, cops on the streets, families better able to live a quality life," he said in New York.

But voters are skeptical. In that crucial swing state of Ohio, one poll has puts the president's approval rating below 50 percent. And an important voting bloc appears to be shying away from the president – independents, who, Politico reports, "seem to be responding to Republican complaints of excessive spending and government control."

Republicans are stoking those complaints with web ads like this one from Thursday, which argues that stimulus funds have been "squandered on fraud and wasteful spending" instead of job creation.

Meanwhile, members of the media have also begun targeting stimulus spending: The New York Times noted that money has disproportionately gone to rural areas, while USA Today notes that the money has "gone overwhelmingly to places that supported President Obama in last year's presidential election."

And yet all this is just the beginning of the stimulus-related headaches for the administration: Questions are now being raised about whether a second stimulus is needed. Legendary investor Warren Buffett said Thursday he believes one "may well be called for," arguing that the first one "was sort of like taking half a tablet of Viagra and having also a bunch of candy mixed in."

Members of the administration, meanwhile, have been offering mixed signals; Biden said on Sunday officials had "misread the economy," while Lawrence Summers told the Times Wednesday that the stimulus is "on track."

According to the Financial Times, "senior administration officials think further stimulus might eventually be needed but they do not want to have this fight now." The FT reports that the officials want to wait until "late this year or early in 2010" to make a decision.

But 2010, of course, is the year of the next midterm elections – and it looks increasingly as though the stimulus bill will be a central topic of debate. Republicans, led by Boehner, have crafted a united and critical message – the minority leader said Thursday that "we don't need another stimulus...we need politicians to stop passing misguided laws and regulations that destroy jobs, eliminate opportunity and reduce freedom."

5033880But Congressional Democrats are still trying to figure out how to play the politics of the issue. They know it could help the country get out of a recession, even if it means increasing an already bloated deficit. But they also know it could help Boehner and his colleagues label them irresponsible free spenders, paving the way for Republican gains in Congress. (Heck, it may well do both.)

Their strategy so far? To say that it's simply too early to make a decision.

"People in the House and Senate and most of the public is thinking…let's see how this stimulus is working," Ohio Democratic Sen. Sherrod Brown told National Public Radio Thursday. "Once more money is in the pipeline, especially in the next couple of quarters, then we will reassess. But I don't think you make a decision on a stimulus yet when this one has not played even 50 percent out yet. You can't really make a decision I don't think on what you do yet on a big public investment."

"The question is always open as to what the administration may recommend to us, but right now I believe that we have much more to gain from -- from seeing through the first stimulus," House Speaker Nancy Pelosi said at a press conference Thursday, adding: "We have to be very careful about the spending on this."

But if the employment numbers don't turn around, House and Senate Democrats may be forced into taking a stronger position. In recent months there have been some positive indicators in the economy, and, as the administration is quick to point out, recovery in the jobs market often lags behind an economic recovery overall. But most economists expect unemployment to hit the 10 percent mark before it goes down, giving the GOP a powerful talking point as it crafts a strategy to take back at least some of the power it lost in the last two election cycles.