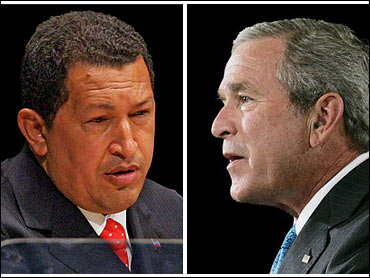 This column was written by Katrina Vanden Heuvel.

Love him, hate him, fear him, revere him, Venezuelan President Hugo Chavez is an elected world leader whose fiery criticisms of U.S. foreign policy can't simply be ignored or ridiculed.

Maybe Chavez did himself, his larger alternative agenda and his country a disservice by treating the U.N. podium as the set of his weekly TV show at home. His "The Devil is Mr. Bush" riff — an obviously allegorical one if you ask me — delivered with an actor's dramatic flair and a good deal of humor risked drowning out other important messages he did deliver. For example, how many know that he laid out an innovative four-point program to renew and reform the U.N. — and spoke eloquently about how and why this "era is giving birth to a heart"?

For sure, the speech was far from a model of diplomatic rhetoric. But that didn't seem to bother the scores of experienced delegate-diplomats in the hall, who greeted Chavez's speech with wild applause. (When Bush spoke the day before, the General Assembly's hall sounded like a morgue.) That reaction, as an incisive Washington Post article points out, shows that Chavez's words, while "harsh ... in many ways ... merely expressed in bolder terms what a number of other world leaders and foreign diplomats believe." Moreover, to be fair, how much diplomatic tact does Chavez owe to a president whose administration supported a coup against him?

Instead of trying to understand why Chavez said what he did and how it played in Latin America and other parts of the world, or reporting that he also said in an interview last week that he'd welcome an improved relationship with the next administration, most of the U.S. media was quick to attack the Venezuelan President for his incendiary words. Few bothered to ask why Chavez's excoriation of Bush might increase his popularity with U.N. member states and boost his campaign to win a non-permanent seat on the Security Council this October.

The media's response isn't surprising. What surprises me, however, is that Minority Leader Nancy Pelosi felt compelled to go on record denouncing Chavez's words. Pelosi — someone I usually respect because I think she's been an effective leader (and has effectively handled ridiculous and tasteless GOP attacks) — said that "Chavez fancies himself a modern-day Simon Bolivar, but all he is, is an everyday thug."

This bad soundbite of an attack certainly seems a distraction from more important issues the Democrats should be engaging and fighting for with just 44 days before election day. And if Pelosi felt it was so important to say something, weren't there more effective ways of putting Chavez's criticisms into context? Maybe talk about how unfortunate it is that Bush's policies have fueled unprecedented anti-Americanism abroad and such vitriolic rhetoric from foreign leaders? Maybe talk about why these are times when we need effective diplomacy and dialogue with countries like Venezuela — not name calling?

Some Democrats, like Sen. Tom Harkin, got it right. Harkin said that, while he believes Chavez's remarks were "incendiary," he "can understand the frustration and anger of certain people because of George Bush's policies." Seems like common sense to me.

By Katrina Vanden Heuvel
Reprinted with permission from The Nation

The Case Against Homework