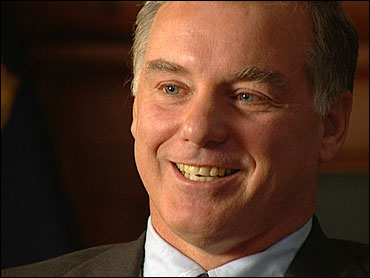 This commentary from The New Republic was written by Ryan Lizza.


It is easy to think the presidential race has reached a tipping point. One week, assured by his supporters that they will raise all the money he needs, Howard Dean skips out of the restrictive federal matching-funds system. The next, he formally accepts the endorsements of the two most politically powerful unions in the country: the Service Employees International Union (SEIU) and the American Federation of State, County and Municipal Employees. And soon, according to an aide, his campaign will unveil a group of foreign policy luminaries who had been advising several candidates but have recently decided to back only Dean. The Dean campaign seems to be shedding the last vestiges of insurgency, aiming to build a sense of inevitability and end the race early with decisive victories in Iowa and New Hampshire, like Al Gore in 2000.

But, for all of his newfound respectability, the buzz from numerous Washington Democrats in the wake of Dean's extraordinary two weeks has been a hardening of opposition rather than a cascade of previously reluctant supporters endorsing the governor. "My sense is that this isn't tipping anyone towards Dean," says a top Beltway Democrat with ties to the Dean campaign. "The overwhelming majority here in Washington are more worried." Instead of consolidating support within the party establishment, Dean is polarizing it.

The division in the party over Dean is less about ideology than about power. Three years after Bill Clinton left office, he and Hillary still control what remains of a Democratic establishment. Terry McAuliffe, the chairman of the Democratic National Committee (DNC), was installed by Clinton. Most of the powerful new fund-raising groups, known as 527s, and the new think tanks, such as the Center for American Progress, are run by the best and brightest of the Clinton administration. As "National Journal" noted in a detailed look at what it called "Hillary Inc.," the senator's network of fund-raising organizations "has begun to assume a quasi-party status." And some of the best Clinton talent is heavily invested in non-Dean campaigns, especially Joe Lieberman's (Mandy Grunwald and Mark Penn), John Edwards's (Bruce Reed), and Wesley Clark's (Bruce Lindsey, Eli Segal, and Mickey Kantor).

Dean, by contrast, has come to represent the party's anti-establishment forces. While the other candidates, especially former self-styled front-runner John Kerry, started the campaign by wooing party leaders, Dean built a grassroots army first -- in part by bashing D.C. Democrats and their disastrous 2002 election strategy -- and is only now leveraging his fund-raising power to win over establishment types. No Democrats closely associated with the Clintons are working for the Dean campaign. In fact, it's hard to find a Clintonite who speaks favorably of the former Vermont governor. This evident schism is not just about Dean's opposition to the war -- or even his prospects in the general election. It's a turf war to decide who will control the future of the party.

This struggle is playing out in several of the party's organizations and constituencies. Indeed, Dean's high-profile labor endorsements -- the cornerstone of the tipping-point argument -- actually emphasize the party's divisions. Andy Stern, the leader of SEIU, is to the labor movement what Dean is to the Democratic Party -- an anti-establishment reformer. When the AFL-CIO failed to adopt reforms recommended by Stern earlier this year, he started a breakaway organization -- the New Unity Partnership -- with several other unions that is now seen as a major challenge to the AFL-CIO establishment. And SEIU is a lot like the Dean campaign. It's the fastest-growing union and one of the most democratically run. It's obsessed with organizing new members to whom it imparts a message of empowerment, unlike the more centralized AFL-CIO. Stern and SEIU, with their emphasis on health care instead of globalization, are the future of the labor movement in the United States, while the industrial unions, which back Dick Gephardt and have been bleeding members for years as they fight an uphill battle against free trade, are the past. SEIU's backing of Dean isn't a nod from the establishment -- it's a protest against it.

The Dean split is mirrored in the centrist New Democrat movement as well. No organization has been more hostile to Dean than the Democratic Leadership Council (DLC). In May, Al From and Bruce Reed, the chairman and the president of the DLC -- the group that served as a policy springboard for Clinton's rise -- wrote their now-infamous manifesto warning that nominating Dean, whom they view as hopelessly left-wing, would bring certain defeat for Democrats in 2004. But, for months, another prominent New Democrat has been making a different case. Simon Rosenberg, who cut his teeth on Clinton's 1992 campaign and now heads the New Democrat Network (NDN), sees Dean as the most innovative and potentially transformative Democrat since Clinton himself. Like Stern, Rosenberg is a bit of a rebel within his own movement. He once worked for From, but his organization is now challenging the DLC and is becoming an increasingly influential player in Democratic politics. Unlike the more top-down DLC, NDN is building a grassroots network of donors and has become a key player in the new world of 527s. "NDN has not endorsed Dean or embraced him, but we have given our opinion that this is a serious campaign that is going to change the party," says Rosenberg.

As the party's split into Deaniacs and anti-Dean Clintonites unfolds, one of the most intriguing subplots concerns the machinations of Gore. Immediately after the Florida recount was decided in 2000, Gore's senior aides were purged from the DNC and Clinton's were installed. Some ex-Gore staffers are still bitter about the coup, and several express admiration for what Dean is doing.

The two men have a strained history, but lately Gore is sounding more and more like Dean. His three most important speeches since leaving office have been harsh attacks on President Bush's Iraq policy and his abuse of the Patriot Act. The two most recent were delivered before MoveOn.org, the Internet network for grassroots liberals, which is overwhelmingly pro-Dean. Some suspect that, just as Dean went outside the Beltway and built his own high-tech grassroots army to bypass the sclerotic D.C. establishment, so is Gore. It's not a bad way for him to exercise influence in the party, if he wants to make a potential endorsement more powerful or if he still harbors hopes of running for president in 2008. "The rest of the Democratic infrastructure is controlled by the Clintons," says one top Democrat.

Perhaps Gore would not endorse the former Vermont governor (though Joe Trippi, Dean's campaign manager, says "they talk relatively regularly"). Regardless, he'll have to choose sides, because the Democrats are splitting into two parties: the party of Clinton, and the party of Dean.

Ryan Lizza is an associate editor at TNR.