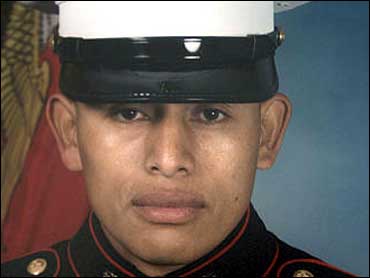 Did you know that approximately 38,000 Americans in uniform are not American citizens – and that at least 10 men who have been killed in Iraq were not U.S. citizens?

That sounds astonishing, but in fact, it’s nothing new. It's been like that in every war the United States has fought, from Valley Forge to Vietnam.

But, as 60 Minutes II first reported earlier this year, the heroism and sacrifice of non-citizens was barely known — until Lance Cpl. Jose Gutierrez died in battle in Iraq.

He came from Guatemala, and he came to the United States illegally. Correspondent Bob Simon reports.

We can tell you how his story ended. He was killed in a tank battle in southern Iraq on March 21.

We can also tell you how his story began. It began in a slum outside Guatemala City. We can’t show you any pictures of Jose, at least not when he was a boy. Jose was orphaned when he was 8 years old and became a street child. Street children in Guatemala do not get their pictures taken.

America will remember Jose as handsome and heroic. But before Bruce Harris met him, he was homeless and helpless - what Latinos call “the dust of the earth.”

Bruce Harris began running Guatemala’s Casa Alianza orphanage - that’s Covenant House in Spanish - shortly after Jose was taken there at the age of 9. Today, Harris directs all their operations in Central America and fights for children so fiercely that Queen Elizabeth invested him into the exclusive Order of the British Empire, in his native England.

“He was really a survivor, and that's how he made it up to United States, because he was a survivor,” says Harris.

“He wasn't satisfied in trying to etch out a subsistence survival in a country like Guatemala, where more than 80 percent of the people are poor. He wanted more. He knew there was more to life than just being poor, so in 1997 Jose said he was leaving for America.”

It was a 3,000-mile trail of tears by foot, by tire, and by train. It was a modern version of an underground railway, and the last leg was over the wall.

But when Jose made it to the border, he got busted. He was 22 years old and the INS was going to turn him back. Saved by his baby face, Jose told the authorities he was only 16. Minors don’t get turned back, so he was allowed to stay in America and get a green card.

“Once he crossed the border and he had to lie to get in, some people say, 'Well, that's not very good,’” says Harris. “I mean, it's not something that we would prefer, but he knew that to survive, if he'd said he was 21, he'd be thrown back with the tens of thousands of wetbacks, a derogatory term used on that side of the border towards people who want to survive.”

His pilgrimage continued through a series of foster homes - one after another. But, once again, he got lucky. He wound up in Torrance, Calif., with Nora and Marcello Mosquera, both Latin American immigrants. They not only took him in, they loved him and called him their son.

“My son told me many, many times, he said, ‘Mom, I don't know why God has me in this world, and why I have survived so many.’ I mean, he for many, many times in Guatemala and so forth, he was very close to being killed,’” remembers Nora Mosquera.

“He wanted to be an architect. 'And everyone is going to remember who I am. And you're going to be very proud of me.’"

Jose was a kid who lost both parents when he was very young. But he had such a positive attitude, says Nora Mosquera.

“You find children that, when they encounter so many problems in their early childhood, they either go the right path or the wrong path,” says Mosquera. “Either they make things stronger. A fight or a soldier to get ahead, and become someone in life. Or they go down the wrong road. I think with Jose, all his experiences made him stronger. A stronger person. A fighter. A leader.”

Jose was one of more than 20 foster children taken in by the Mosqueras, but he became a real brother to the Mosquera daughters, Lillian and Jackie.

Jackie remembers Jose as a silly, happy brother who loved the Beatles and used to make fun of the song “Hey Jude.”

“'Hey Jude' came on and he's sitting there, singing, ‘Hey Dude.’ I'm like, ‘Jose, it's not Hey Dude. It's Hey Jude,’” remembers sister Jackie, laughing. “And by the end of the song, we were all singing … Hey Dude.”

Jose went to a community college, played soccer there and then dropped out last year to join the Marines. He was not an unusual recruit. Most Marines are only high school graduates, most are working class, and many are Hispanic. And when a green card holder joins the military, he can apply for citizenship after three years, instead of five.

“I cannot stand having a regime do to women and children what this regime is doing in Iraq. And I'll give my life if I have to, in order to defend those children," Nora remembered Jose telling her.

“Those are the ideals of the Marines. And those were his ideals, of becoming someone. Of being able to help those other children that are not as fortunate as he was. Of finding a family and coming to the U.S.”

He gave back, all right. Jose was one of the first U.S. servicemen to die in combat.

No death of any soldier goes unmourned. But the death of a man who died for a country that was not his -- that proved especially poignant to many Americans, including President Bush who visited two wounded non-citizen soldiers and made them citizens on the spot.

Jose was also granted American citizenship posthumously, and that’s also when he became a hero. A cardinal officiated at a memorial service in a Los Angeles suburb, where many poor people, including Latinos, attended.

“Isn't it amazing that those are not acknowledged as citizens here are the ones that are doing that hard work for the country,” remembers Jose’s parish priest, Gustavo Castillo. “Doing the fighting and risking their lives.”

“He is a hero now. And it's unfortunate sometimes that that's what has to happen in order for people to be known, in order for them to accomplish something.”

Jose may be considered an American hero. But how about in Guatemala? It’s a little more complicated. Jose told his family that he wanted to be buried there. It was, after all, his home. The Marines came down to give Jose a proper military farewell, but there were hardly any Guatemalans at the ceremony. After all, officials said, he didn’t die for Guatemala.

“One group felt that these young Hispanic men were being sent as cannon fodder into the battlefield, because at first, many of the U.S. Marines who were killed were Latinos.” says Harris, who mourned the death of Jose, an orphan he lifted off the streets of Guatemala nearly 25 years ago.

“That created a big question here. Are young Hispanic men who go up to the United States looking for future, for education? Are they being sent to the front because they're dispensable?”

Harris believes that Guatemalans now view Jose as both a victim and a hero.

“It's always a very difficult situation. I mean, we’ve looked at how we use the terminology. Having been for years the throwaway kid, the rubbish of society, who are we now to question that he should be called a hero after living so many years as a nothing,” says Harris. “But it's a high price to pay for a title.”

The U.S. government bought Gutierrez a plot in Guatemala’s ritziest cemetery, probably making him the first kid from the slums ever buried there. But this is where Harris wanted him buried, in a plot reserved for Casa Alianza kids – the street children – of which Jose was one.

Another neighborhood. Another kind of cemetery. And there is also a plaque there in memory of Jose.

“It is important for him to be here. It is his home,” says Harris. “Not manicured, not nice trees, but this is where his people are. Beautiful poem: Here I am, Lord but I cannot arrive without your hand. Take me because I want to know your beautiful face. Excuse my errors but I want to share your beautiful heart. I am yours, Lord. Take me home.”

And, at home in America, where Jose saw his future, he is finally a citizen. And he didn’t have to wait three years to apply. Right now, Congress is considering several proposals that will make it quicker and easier for green card holders to become Americans when they join the military.

His family, however, is saddened that Jose wasn’t able to see it become a reality.

“Hopefully, by taking these examples of these kids coming home in boxes and giving it to them,” says Lillian. “Hopefully, this will show Congress, or someone in the White house, to let these immigrants that are fighting for us have the privilege to enjoy being an American citizen in their daily lives - instead of coming home in body bags.”

Jose was also a poet. Here’s part of a poem he wrote before he joined the Marines:

“I come from far away where the angels live in misery, dress themselves in filth and eat dreams.”

The toughest thing about covering Jose’s story is that we never got to meet him.

Jose and the nine other green card holders who died in Iraq have prompted a number of congressional proposals that would make it quicker and easier for non-citizens to become Americans when they join the military.

Several weeks after 60 Minutes II first broadcast this story, the U.S. military revealed the cause of Gutierrez's death. It was not from Iraqi guns, but friendly fire, from his fellow Americans.

The Mosquera family plans to establish a scholarship fund in the memory of U.S. Marine Lance Cpl. Jose Gutierrez. Scholarships will be set up at Los Angeles Harbor College, North High School, and Wendy's Kids, an organization for foster kids in Los Angeles.

Please send an email to josesfamily@yahoo.com for more information.