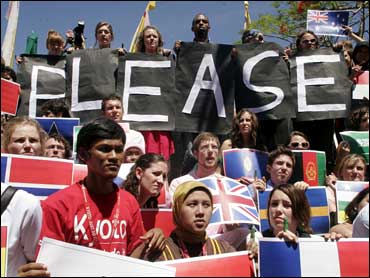 This column was written by Daphne Wysham.


It's the second week of the UN Climate Change Conference and the air is heavy with humidity, but despite being the rainy season, it hasn't rained heavily in weeks. The rooms in the conference facilities where people are clustered around computers feel like saunas, an appropriate thing, I suppose - reminding us not only of where we are, in tropical Bali, but also of why we're here. The world has a fever, and we're here to begin to bring the temperature down before it's too late. The question is, will the 15,000 or so government and nongovernment actors here deliver the goods, or have events been set in motion to make such a breakthrough impossible?

The UN website for the Climate Convention puts an upbeat spin on the meetings here. However, behind the public relations efforts divisions are apparent -- not just between North and South, or between the United States and most of the rest of the world, but also between and among NGOs.

When money is on the table, there can be plenty to fight about. And right now there is a hefty wad of cash being dangled before governments and NGOs that comes with a catch: accept carbon trading as the deal or get nothing at all. Even so-called adaptation funding, arguably the largest piece of the pie, if done correctly, is being proffered to cash-poor countries -- but only as a percentage of the carbon-trading budget. The message: accept carbon trading or your poor will starve.

Not surprisingly, many governments are jumping on board with this offer. Too many developing countries are still suffering the legacy of indebtedness and poverty to Northern institutions like the World Bank and IMF, staggering debt set in motion by the high oil prices of the 1970s, to have much of a choice in the matter. If it means pledging to protect their forests and treat them as carbon offsets to allow the North to continue to pollute, so be it.

And then there is the issue of bribery. While no one can be certain how much money has infected the political process here, there are indications that agreements that are being structured around Indonesia's forests involve insider dealing with carbon traders, deals that place millions if not billions of dollars on the table. Surely, once the deals are sealed, there's enough to share with a few choice decision-makers.

The World Bank's cocktail party reception for its Forest Carbon Partnership Facility December 11 in Bali was met with organized protests from indigenous peoples and their allies, and chants of "Hands off, World Bank!" The reason: the forests where indigenous peoples make their home are now up for auction as "carbon sinks." Yet in an age-old pattern of marginalization, no one bothered to consult the indigenous peoples.

Surprisingly, or perhaps not so surprisingly to long-term observers of the climate debate, this enthusiasm for carbon trading has spread to many NGOs as well. Some conservation groups are eager for more cash to help them protect a rainforest here or save an endangered species there. And organizations that work on hunger or disaster relief are equally eager to get more revenue for a problem that only promises to grow worse.

Those who are skeptical of the conditions placed on this cash are largely outside the NGO circles that have dominated the process thus far. To be fair, those working on this issue for years have seen proposed regulatory measures shot down in favor of market mechanisms, in order to get the largest emitter, the United States, on board. Now they are merely trying to get the United States to stop obstructing whatever deals can be struck in the final days.

With time running short, they feel there is no time to go back and rethink the whole concept; they are wedded to a process, one made in America, and having pushed their governments this far, they are reluctant to reconsider. Perhaps because so few alternatives are making it to the table, they continue, full steam ahead, ignoring the concrete results that signal failure, corruption and, worst of all, an increase in greenhouse gases under various carbon-trading schemes.

But here's the deal: carbon trading is not some innocuous attempt at climate stability. It is the neoliberal agenda writ large. Countries that are already on the treadmill of debt will become even more beholden to the institutions that have so successfully advanced the corporate agenda via the World Bank, the WTO and other agents of hegemony.

What, then, is to be done? I suggest there are at least six critical components in a strategy that might actually turn the tables on this dominant "solution" to the climate crisis. But they will not come from the environmental groups, at least not from most of those that are represented here at the climate negotiations, nor from the governments themselves.

First: Name the problem: We have been hoodwinked. Just as the subprime mortgage crisis was entirely predictable by the average realtor and yet was allowed to unfold, this buying and selling of carbon permits is clearly headed for a meltdown, and we need to face up to it.

Second: Re-establish sovereignty. Carbon trading, as a neoliberal tool, strips governments of their regulatory authority and hands that power over to outside actors - either the carbon traders themselves or so-called carbon auditors who cannot be made accountable to the people. Sovereignty must be restored and reinforced in countries around the world if we are to truly get a handle on this problem. This means, among other things, making sure any climate change agreement trumps any trade complaint.

Third: Make transparency central to any climate solutions. Carbon trading thrives on secrecy. In the world of carbon markets, as in the world of markets everywhere if left unchecked, business confidentiality trumps the public right to know. The public right to know, in this case, is not about a dirty industry here or a cancer cluster there: it's about whether or not our planet is in safe hands. Do we simply trust Chevron when it says it is capturing a million tons of carbon dioxide from its Nigerian oilfields? Can we trust governments not to be bribed by the waste disposal industry around the quantity of methane being captured from their landfills? There can be no integrity without transparency.

Fifth: Follow the money. There is absolutely no reason to invest taxpayer dollars in the very oil, gas and coal companies that are the number-one cause of climate change - not when scientists tell us we have only seven years to turn this ship around. Institutions like the World Bank, the US Export-Import Bank, the European Investment Bank and others must cease financing fossil fuels, and they must do it yesterday. Private finance will follow suit once the deep pockets of these public institutions are no longer sending the signal that such investment is in the public interest.

Finally: Work for debt cancellation. The climate crisis is in many ways driven by debt. Debt forces countries to remove barriers to free trade. It forces them to roll back regulations that protect their forests. It forces them to extract oil, gas and coal for export or to accept outsourcing of energy-intensive industries to their shores more readily than they would otherwise do. And it gives developing countries little choice but to get on the carbon-trading bandwagon, further expanding foreign control over their resources. These all have climate consequences.

Thankfully, the debt-cancellation movement is here in Bali. Most of the activists have not been able to access the negotiations, and many are bewildered by the mind-numbing array of acronyms that greet them upon their arrival at the UNFCCC. They imagine, as do the rest of the uninformed public, that the "experts" have things under control.

Those with fresh eyes and little experience would do well to trust their instincts and not be turned away out of intimidation. The solutions are simple: do everything possible to keep the oil, gas and coal in the ground. Stop decimating our forests. Provide money for countries and workers within those countries to transition toward clean technologies and to help them build green economies. Don't turn your back on the poor who are already facing surging tides, drought and crop failure, and who will need billions of dollars, if not outright resettlement to wealthy countries, in order to survive.

If we stay focused on these fundamentals - and not on the false solutions of carbon trading - we may just see a breakthrough. Perhaps not here in Bali, but then again, these things can only happen on the ground, in all of our countries and communities, around the world. Let's get on with it.
By Daphne Wysham
Reprinted with permission from the The Nation