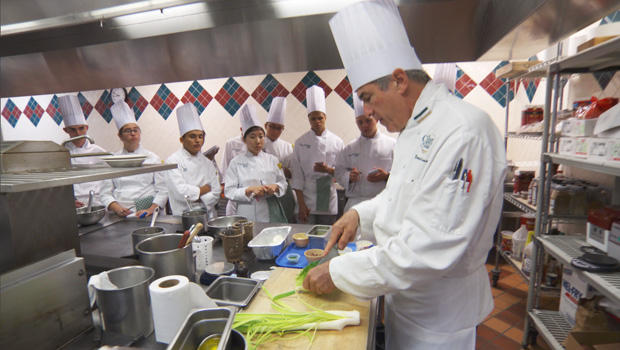 What the mortar board is to Graduation Day at so many colleges is what the chef's toque is to the school known as "The Other CIA." Serena Altschul shows us why:

And it's their homework … decorating a nine-tier wedding cake.

The roommates are baking and pastry students at the Culinary Institute of America, also known as the other CIA. It's a place Julia Child once called "the Harvard of cooking schools."

Among its nearly 3,000 students is James Bickmore-Hutt from Australia. "My family were kind of baffled by the fact that I wanted to come to culinary school, because I originally was studying engineering," Bickmore-Hutt said. "And then I said, 'Well, you know what? I want to go study food.' And they were like, 'Okay. Why?'"

Cece Cooper is from Washington, D.C., and enrolled after serving in the Air Force.

How different is culinary school from Air Force service? "I think it's a little bit more structured," she said. "I hate to say that, because the military's all about structure. In the military, you have structure on a grand scale. But here, it's down to that little, minute detail."

Details that begin with the fundamentals, like knife skills -- leading to more advanced work in Latin cuisines, wine tasting, and even 3-D printing with sugar.

The school's nine restaurants are also classrooms, where students both cook and wait tables.

The Culinary Institute of America started as a trade school for 50 GIs returning from World War II. It would go on to change how chefs were taught, says CIA president Tim Ryan.

"The European model, and particularly the French model, was based on apprenticeship," Ryan said. "It was the learn-as-you-go, 'You're gonna be an indentured servant to me for three years.' And then in 1946 along comes the CIA and completely blows up that notion on how chefs are not just trained, but educated."

But at a price. It costs around $33,000 a year to attend -- that's more than many grads make in their first year out of school.

And then there are the occupational hazards.

But cuts and burns heal, of course. For Felice, Skya, Cece and James, all recent grads, what is far more lasting, they hope, is a recipe for success.

Try out these recipes from the Culinary Institute of America:

You can also find more recipes (with instruction videos) in the CIA site's recipe section.