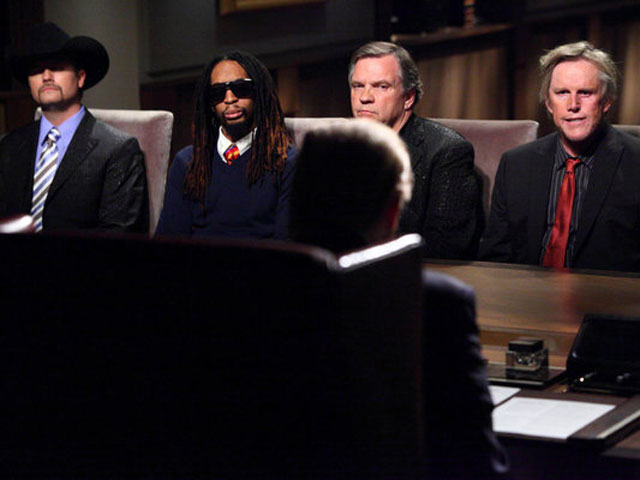 (CBS) The rocker Meat Loaf, who hadn't spent time in front of a grill until now, emerged as "The Celebrity Apprentice" star Sunday night when he prepared three meals for an Omaha Steak cooking demonstration.

Company executives said he came off as proficient and knowledgeable, even though he had no previous cooking experience and no opportunity to prepare for the live event. (SPOILER ALERT)

When the men's team lost despite Meat Loaf's efforts, members united to blame project manager Gary Busey. They said his delegation put too much of the burden on Meat Loaf, his time management left no time for rehearsal and his presentation was filled with stories that bored the audience. And that's just for starters.

Host Donald Trump, who had given the actor a stern warning last week, gave him the ax in this episode which required teams to cook three meals in a live 20-minute demonstration and prepare a specialty pack for Omaha Steak.

The women's team, led by Playmate Hope Dworaczyk won, on the basis of its lively presentation and its Poker Night package. The women were faulted by executives for not doing enough cooking in the demonstration and for calling the product Omaha instead of Omaha Steaks.

There was a good deal of drama in this episode as both teams prepared for the task and some confrontation between country singer John Rich and Busey. And over on the women's side, LaToya Jackson ignioted a grease fire while flipping burgers, which set reality star NeNe Leakes off.

Who will get the next pink slip? Tell us below and take our poll on the who will be the next "Celebrity Apprentice."