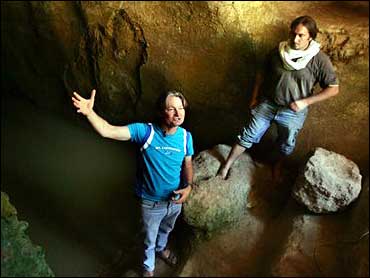 Archaeologists said Monday they have found a cave where they believe John the Baptist baptized many of his disciples — a huge cistern with 28 steps leading to an underground pool of water.

During an exclusive tour of the cave, archaeologists presented ancient wall carvings they said tell the story of the fiery New Testament preacher, as well as a stone they believe was used for ceremonial foot washing.

They also pulled about 250,000 pottery shards from the cave, the apparent remnants of small water jugs used in baptismal ritual.

"John the Baptist, who was just a figure from the Gospels, now comes to life," said British archaeologist Shimon Gibson, who supervised the dig outside Jerusalem.

However, others said there was no actual proof that John the Baptist ever set foot in the cave, about four kilometers (2.5 miles) from Ein Kerem, the preacher's hometown and now part of Jerusalem.

"Unfortunately, we didn't find any inscriptions," said James Tabor, a religious studies professor at the University of North Carolina at Charlotte.

Tabor and his students have participated in the excavations.

Both Tabor and Gibson said it was very likely that the wall carvings, including one showing a man with a staff and wearing animal skin, told the story of John the Baptist. The carvings stem from the Byzantine period and apparently were made by monks in the fourth or fifth century.

Gibson said he believed the monks commemorated John at a site linked to him by local tradition.

Gibson said the carvings, the foot washing stone and other finds, taken together with the proximity of John's hometown, constituted strong circumstantial evidence that the cave was used by John.

John, a contemporary of Jesus who also preached a message of redemption, is one of the most important figures in Christianity. The discovery, if confirmed, would be among the most significant breakthroughs for biblical scholars in memory.

The cave is on the property of Kibbutz Tzuba, an Israeli communal farm just outside Jerusalem. A member of the kibbutz, Reuven Kalifon, knew of the cave's existence — the community's nectarine orchards run right up to the mouth of the cave — but it was filled with soil almost to the ceiling.

In 1999, Kalifon asked Gibson to inspect the cave more closely.

The archaeologist, who has excavated in the Holy Land for three decades, crawled through the small opening and began removing boulders near the wall of the cave. When he pushed aside one of the stones, he saw a head carved into the wall — the top of the figure he believes depicts John.

Gibson, who heads the Jerusalem Archaeological Field Unit, a private research group, organized an excavation. During the five-year project, he wrote a book, entitled "The Cave of John the Baptist," to be published later this week.

"It (the site) apparently was adopted by John the Baptist, who wanted a place where he could bring people to undergo their rituals, pertaining to his ideas of baptism," Gibson said.

Believers would have walked down 28 stone steps. To their right, they would have discarded their clothes in a niche carved into the wall.

At the bottom of the steps, they would have placed the right foot onto a stone with an imprint of a foot, about shoesize 45 (11 US). A small depression to the right of the imprint would have contained oil, to be poured over the foot for cleansing, Gibson said.