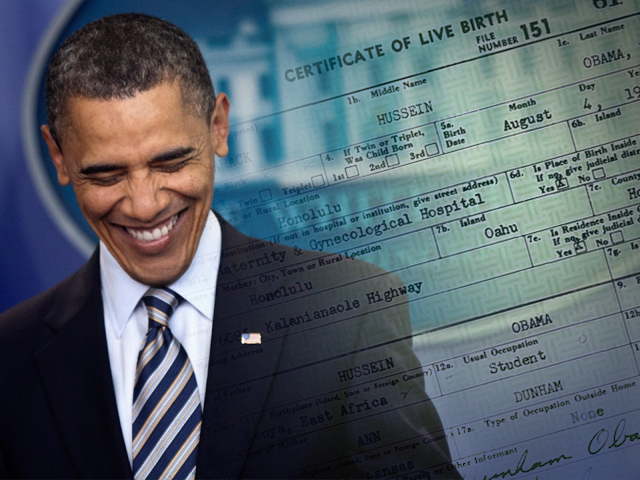 After President Obama released his birth certificate yesterday morning, he appeared in the White House briefing room to prove that he was indeed born. Still, the robot rumors persist.

It was a day for wild exaggerations, or at least the woozy feeling from straddling the two poles of the news moment. At one end: The president named his new national security team, at a time when the country is engaged in combat in several countries. The chairman of the Federal Reserve was scheduled to give a long-anticipated press conference about the state of the economy. Peaceful protesters were being gunned down in Syria. At the other end: There were so many news cameras in New Hampshire to cover Donald Trump's visit there you might have thought that the royal couple itself had planned to honeymoon on Lake Winnipesaukee.

This isn't the end of the world as we know it. But it's not a great moment. And it's worth asking, before we arrive at the next Most Embarrassing Moment in American Political Discourse, how we arrived at this pass. If we're going to apportion blame, then let's be clear about who gets what.

So, then: Donald Trump. Is all this his fault? Not really. He's just producing the show. We're the ones watching, and we're the ones sending the cameras there. And some of us are too lazy to spend time with Google or Dave Weigel's reporting to understand the claims about Obama's birth. According to the Gallup poll 24 percent of respondents in a recent poll have doubts about Obama's being "natural born," the constitutional requirement for a president.

What is the danger of Trump? That a man with money, the ability to attract news coverage and a crusading ignorance of the facts will hijack the political conversation? You might argue that's pretty much already happened. Sure, Trump has elevated this to a kind of Dada performance art, but for a lot of people the political system is already a joke. It's only those of us in the political class who are just now waking up to this. Part of Trump's appeal is that he is a giant middle finger to the political system--the politicians, the press, all of us.

This is all very postmodern, of course. Trump is not a champion of those who have lost faith in the system. He's a champion of himself. His views are not well-known. But he is a place for the faithless to park their feelings.

Which brings us to the White House. The White House strategy has long been to focus on "important issues" and not get distracted by the news cycle. But it is not above using the very distractions it decries to call attention to the issues it cares about. The birth-certificate issue was a distraction, but it was also a bedevilment that could flare up at any time in the future. It was also a political opportunity. In this way the president's visit to the press room was not so much a deviation from his long-term political strategy as an extension of it.

Obama has struck this pose before, during the fight over extending the Bush tax cuts and the threat of a government shutdown. (One suspects that, if there hadn't been a crazy distraction upon which the president could play out this theater, the White House carpenters would have erected one.) That the president sought to make his stand on the day that Trump was visiting New Hampshire showed that while he may disdain the political media, he isn't above taking advantages of its appetites.

The president was right, of course, that the media eats this stuff up, though he overplayed his hand by claiming that the birther story was the "dominant" one in the week that he gave his big budget speech (National Journal checked his math). So why did he say it? There are at least three reasons someone would hold this view: You're fibbing to make your position look better, you're so totally obsessed by cable that it defines your world, or you're in a defensive crouch. None of these reflects well on this president, even in a moment when there are other throbbing targets worthy of our condemnation.

The risk for the White House in releasing the long-form birth certificate is not that it would elevate Trump. The White House would dearly love it if the GOP became the Trump Party. It makes Republicans look loopy and unserious to the voters that will decide the general election. The issue also creates tension within the party, as more earth-bound Republicans (who, like Obama, claim that they are adults focused on serious matters) try to kill discussion of the issue.

For Donald Trump, however, the overriding issue has always been Donald Trump. "Today I'm very proud of myself," Trump said in New Hampshire. One of the great benefits of the Tea Party movement has been to reacquaint some Americans with the nobler qualities of some of our founders. Humility was key among them. Washington took to the new presidency with reluctance. Trump would have put his name in gold leaf above the first presidential residence in Philadelphia.

Putting aside Trump mockery--difficult as that may be--and taking him seriously for a moment, this episode has revealed yet another reason he is so spectacularly ill-suited to the presidency. The most important task for a president is knowing how to set priorities and maintain a sense of perspective. By founding his candidacy around the question of Obama's birth, Trump fails this basic test.

The only way Trump can top himself now is to attack Obama for not serving in Vietnam. Maybe he's saving that for the fall campaign, along with the dancing lions and flaming acrobats.

Obama's birth certificate: The issue will last as long as his presidency
Even opponents of DOMA should want it to get a vigorous defense
Obama's open-government initiative: Why is it failing?