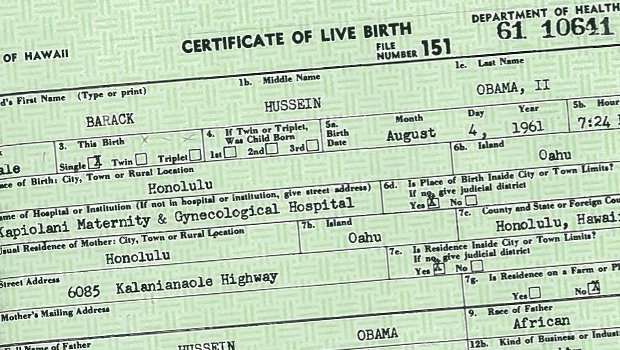 Even before President Obama released his long-form birth certificate Wednesday morning, it was obvious to anyone who had examined the evidence that the president was born in the United States. Yet that didn't really matter: The "birther" movement, like the "truther" movement alleging U.S. complicity in the Sept. 11 attacks, was never really grounded in evidence. It was about distrust of the president. Which is why no amount of evidence will make it go away.

Already, well-known birther Orly Taitz, who has had lawsuits challenging the president's birth dismissed, is raising questions about the new document. She is suggesting that his race should be listed as "negro," not "African," and saying she maintains that the president isn't a "natural born citizen," as mandated by the Constitution, because both parents need to be American citizens. (That's not true.) Taitz also suggests the president is using a false social security number.

Another well-known birther, Phil Berg, also argued after the release that "the issue" is that Mr. Obama is not a natural born citizen. "Let's see his records coming back through immigration," he said.

The conservative news aggregator The Drudge Report is asking in its headlines, "is it real?" and "Composed of layers?" At the top of the site is a picture of potential GOP presidential candidate Donald Trump and the words "NOW LET'S SEE THE COLLEGE RECORDS." After reinvigorating the birther debate, the reality show host has recently pivoted to questioning whether Mr. Obama deserved to get into Ivy League schools. Like birtherism, it's an ostensible serious question that is ultimately a veiled attack on presidential legitimacy.

Trump takes credit for Obama birth certificate release, but wonders "is it real?"

The Smoking Gun has posted a snarky rundown of the questions they expect to be asked about the long-form birth certificate, such as, "What is the significance of the mysterious numbers, seen vertically, on the document's right side?" The site also writes, sarcastically, that "David A. Sinclair, the M.D. who purportedly signed the document, died nearly eight years ago at age 81. So he is conveniently unavailable to answer questions about Obama's reported birth." What's a joke to some, however, is all too serious to others: Drudge has a prominent headline on his site pointing to this very issue, with a link to Sinclair's 2003 obituary.

Last week, Politico's Ben Smith and Byron Tau traced the evolution of birtherism, which started with claims he was secretly Muslim and mutated to claims he was educated in an Indonesian "madrassa" before settling on the notion that he was not born in the United States, despite birth announcements and a short-form birth certificate that stated otherwise. It was a nice illustration of the fact that birtherism, in all its forms, is essentially an ideological movement seeking a concrete foundation - and when that foundation doesn't hold, birthers either chose a new one or simply ignore the cracks.

It's not entirely clear why the White House chose to release the birth certificate today. Certainly the issue has gotten traction: A recent CBS News/New York Times pollshowed that one in four Americans believe Mr. Obama was born outside of the United States. But in light of two years of the administration largely ignoring the doubters, the release came as a surprise. A White House official told Smith that the politics of releasing the document "probably aren't" good, suggesting that "allowing the GOP primary to devolve into birther mania probably would be better, but the president felt strongly that this was bad for the country."

Obama: I released birth certificate because media has been "distracted by sideshows and carnival barkers"

Maybe. Certainly Mr. Obama may succeed in shaming the press corps into moving away from the issue, despite the ratings that come with it. But as CBS News Chief White House Correspondent Chip Reid points out, the release of the certificate was also an opportunity for the president to portray "those who push the issue as silly carnival barkers, while he's dealing with serious issues." (At left, Washington Unplugged analysis of the birth certificate release from CBS News' Bob Schieffer, Chip Reid and Bill Plante.)

That was a politically savvy move - one that fits well with the narrative the White House has been pushing that Mr. Obama is one of the few grown-ups in Washington.

And even if Democrats legitimately see political advantage in birther issues taking over the GOP discourse - and they have reason to - they lose little from releasing the documents. The conspiracy theorists, driven by anger and distrust, have never let facts get in their way. There's no reason to think that's going to change now.