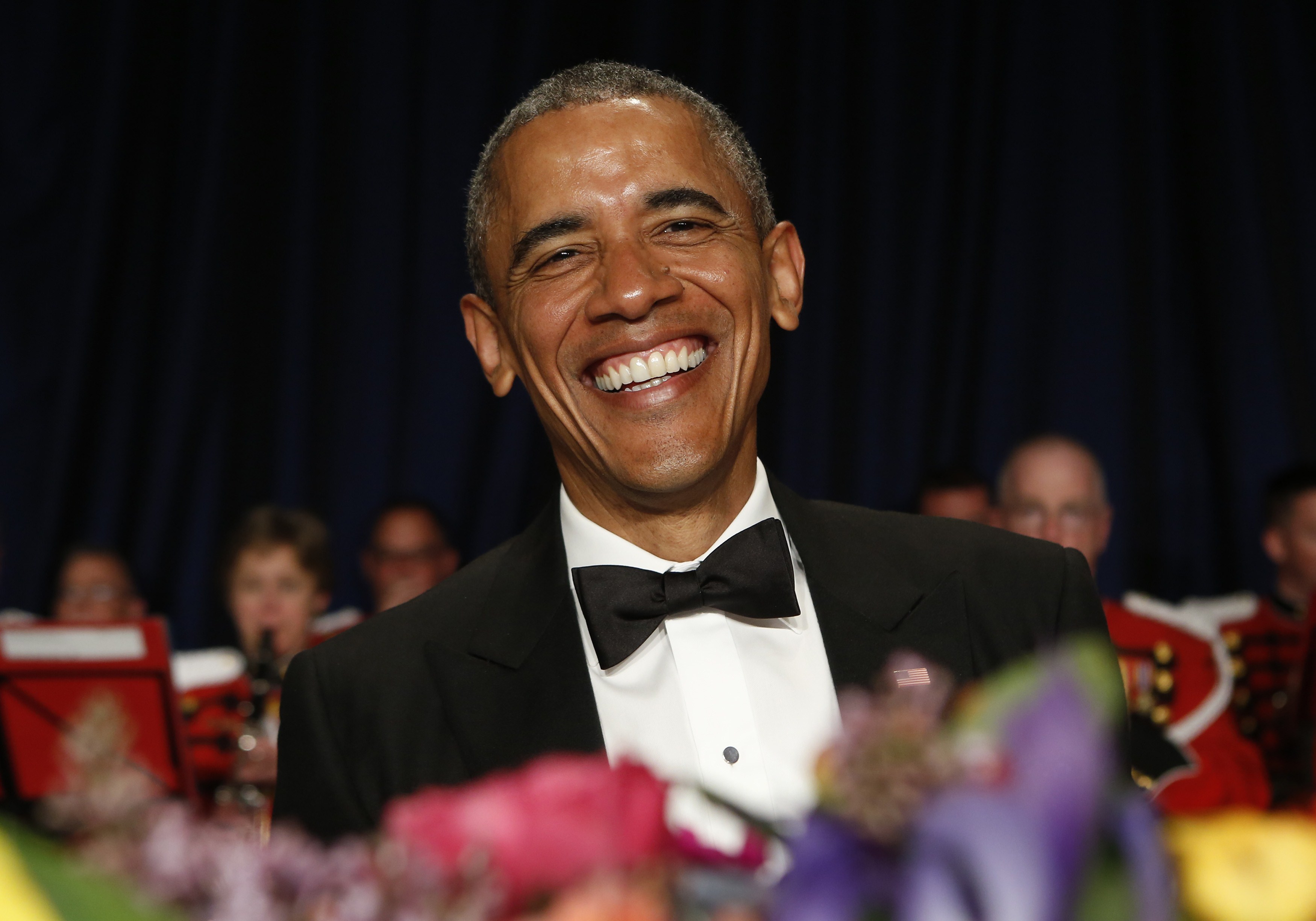 WASHINGTON -- At the White House Correspondents' Dinner, President Obama weighed in Saturday with a few bitingly humorous takes on the 2016 race, dishing out zinger after zinger on the contenders for the White House and the media covering it.

The White House Correspondents' Association, now in its 101st year, hosts the incongruous meeting of Hollywood glamor with Washington stiffs.

But the real toast of the evening: the president's awaited punchline deliveries.

Attended by over 2600 guests -- a motley crew of politicians, journalists, and Tinseltown celebrities -- the annual confab is also a chance for the president to let down his normally serious, professorial guard and try his hand at stand-up comedy.

And Mr. Obama, who has now had six humorous years of gala practice under his belt, didn't disappoint -- especially when it came to his jabs at potential 2016 candidates.

"Soon the first presidential contest will take place," the president said. "And I for one can't wait to see who the Koch brothers pick."

He took specific aim at those who were weighing bids for the White House.

"We've already seen some missteps, with Jeb Bush identifying himself as Hispanic," the president said to some laughs. "It reminds me of when I identified myself as American in 1961."

Obama also reminded the chuckling audience that Texas Senator Ted Cruz recently denied the man-made causes of global warming: "Ted Cruz said that denying the existence of climate change made him like Galileo."

In a self-deprecating moment, the president added, "And when a guy who has himself on a 'Hope' poster calls you self-centered, you know you've got a problem."

The President also took aim at possible 2016 candidate and former Pennsylvania senator Rick Santorum, who recently said he would not attend the wedding of a close friend or relative who was gay.

"To which gays and lesbians around the country replied: 'that's not going to be a problem," Mr. Obama said to laughs. "Don't sweat that one."

On a roll with jibes targeted at the GOP's wide field of presidential contenders, Obama noted that "Donald Trump is here... still."

But in the president's long history of biting jabs, he's never limited his roasts to just his political foes.

Obama didn't spare his own party's contenders in the 2016 race to the White House.

In a jab at Hillary Clinton's recent private email scandal, the president brought out some secret photos of Clinton's (faux) instagram account.

"Here I was thinking Hillary's private instagram account was going to cause her bigger problems," the president joked, before a slideshow of photoshopped Clinton photos played.

"Hillary kicked things off in 2016 by being completely unrecognized at a Chipotle," Mr. Obama said, before taking a stab at another possible White House contender, former Maryland Gov. Martin O'Maley.

"Martin O'Malley kicked things off by being completely unrecognized at a Martin O'malley event," the president said to laughs.

The chief executive also gave a nod to Vermont's Independent Senator Bernie Sanders, who has become a favorite among left-leaning voters.

"For Bernie, some folks really want to see a pot smoking socialist on the White House," the president said, earning humorous applause. "We could get a third Obama term after all."

And it wasn't just those weighing bids for the White House that Obama skewered: he didn't show any mercy to the Democratic party.

Touting his own improving track record on economic issues, the president said: Nine in ten Americans have health coverage today. Thanks to Obamacare, you no longer have to worry about losing insurance if you lose your jobs."

And then the punchline: "You're welcome, Senate Democrats."

On Saturday, Obama also took aim at some of his closest supporters and those in his administration.

"I tease Joe sometimes, but I love that man," the president said of his second-in-command, Vice President Joe Biden. "In fact, we've gotten so close in some places in Indiana that they won't serve us pizza anymore."

And when it came to the hosts of the whole affair -- the Washington media machine -- the president shared a few thoughts on them.

He called the White House Correspondents' Dinner "the night when Washington celebrates itself," adding wryly that "somebody's gotta do it."

He mentioned that "brutal winter" in the District of Columbia, caused by the polar vortex, caused such record lows that "they renamed it MSNBC."

Not to be outdone, "Saturday Night Live" star Cecily Strong, the comedian to host the dinner, also touched on issues of press integrity.

She asked those in the room to hold up their right hands and repeat after her: "I solemnly swear not to talk about Hillary's appearance because that is not journalism...also Cecily Strong looks great tonight."

And in a reference to an NBC News scandal, Strong joked: "What can I say about Brian Williams? Nothing. Because I work for NBC."

Strong took no prisoners when it came to the butts of her jokes, from the Secret Service ("They're the only law enforcement agency that gets in trouble if a black man gets shot") to the dinner venue itself ("It is so great to be here at the Washington Hilton... is something a prostitute might say to a congressman").

She too lobbed shots at the 2016 contenders.

"Hillary Clinton has her work cut out for her," the SNL comedian remarked. "Her democratic challengers are a who's-who of who's-that."

People think Elizabeth Warren "is too idealistic, and that her proposed policies are too liberal" the host commented, referencing the Democratic Massachusetts senator. "But look at President Obama... People thought the same thing about him and he didn't end up doing any of that stuff."

Strong ended on a positive note, thanking those that shared the limelight with her earlier in the evening.

"Mr. President it was a true honor to be here tonight," she said in closing. "And thank you to the White House Correspondents' Association -- whatever that is."