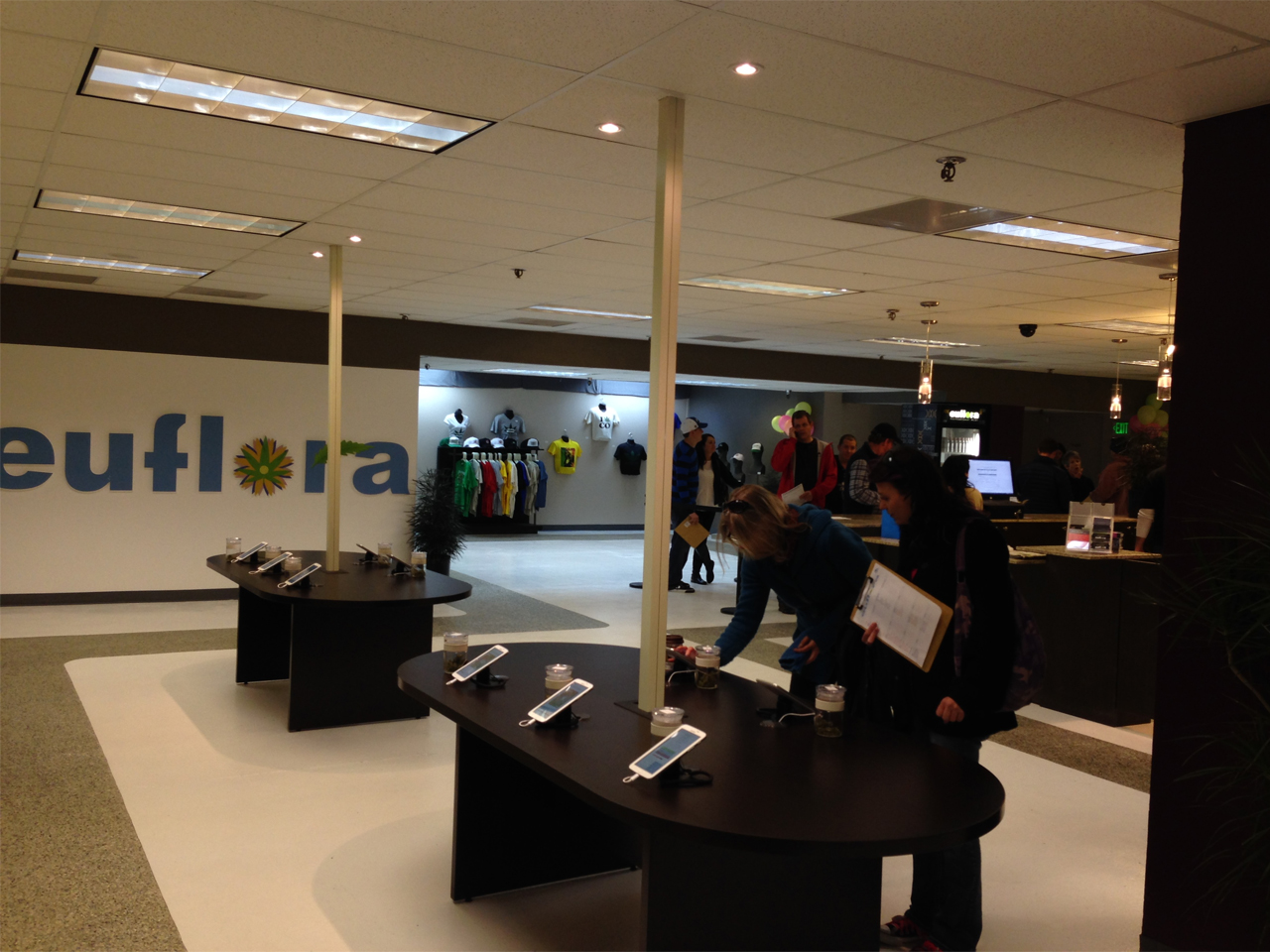 The lunchtime crowds on Denver's 16th Street Mall were usually heavy on Friday, as hundreds of Rockies fans strolled their way into the city's Lower Downtown or "LoDo" district, for the major league season opener at Coors Field.

Many of those baseball fans may have noticed a modest sign and some balloons hanging outside one office building, as a sidewalk greeter welcomed passersby to the grand opening of the pedestrian mall's first recreational marijuana shop.

Down the stairs, business was brisk at Euflora -- a cannabis dispensary designed for Colorado's growing marijuana tourist trade.

Workers are resigning at record rates. That's good for the economy.
"The 16th Street Mall is probably the most visited tourist destination in Colorado, with 2.3 million visitors a year," said Jamie Perino, Euflora's owner/manager. "And we decided, since recreational (cannabis) is more of a tourist industry, that this would be the ideal location for it."

Perino, who had only minimal previous experience with marijuana before opening the shop, said Euflora was created to appeal to consumers who like the "Starbucks, Apple (Store) kind of feeling."

And indeed, the store's size, minimalist design and layout is reminiscent of a lot of modern retail spaces. Customers are handed check-off order sheets as they enter and directed by employees to a variety of well-lit displays -- featuring so-called "edibles" (marijuana infused chocolate bars and other snacks), infused drinks and cannabis flowers.

One of Euflora's innovations is having the marijuana in large plastic containers on display tables; containers that allow would-be customer to closely examine and even smell the different buds without touching them. And right next to each sample container is a tablet computer with detailed and regularly updated information about each of the strains for sale.

Using this patent-pending sales approach, Perino said, allows customers to "educate themselves...spend as much time as they want and go back and forth, and really just do it in a more relaxed manner."

The Euflora approach also anticipates an evolving consumer base for Colorado's recreational marijuana industry, which became legal in the state on Jan. 1. While figures are not yet available, there's been growing consumer demand for cannabis-related guided tourism in the state. But given that marijuana remains illegal under federal law, Colorado's regulated cannabis business still is struggling with the product's outlaw and underground reputation. And many cannabis entrepreneurs are working to dispel that image by making their facilities as relaxed and tourist-friendly as possible.

"We went to another dispensary, then came to this one," said 22-year-old Carlos Felix from Los Angeles, who works in retail back home. "But I like this one -- it has, like, an Apple Store feel to it." Felix also liked the store's overall approach to its customers. "Honestly, man, it's way more friendly," he added. "In L.A. (where only medical marijuana is legal) you have to go, like, through three doors -- security guards all just mean, mugging you. So it's weird -- right here, it's like an open environment -- open space."

Meanwhile, 28-year-old Adam from Westchester, Pa. -- who asked that only his first name be used -- was in Denver on vacation with his father and discovered the store by accident."I think it's phenomenal," he said, gesturing at the displays.

"It basically looks like an Apple Store or a really high-tech venue," he added. "What I like about it, it's very informative, so people that don't know about cannabis and then have a lot of questions can easily pull up the digital touch screens here and learn about the different products that they have."

A mile away, just off the 16th Street Mall and practically in the shadow of Coors Field, the LoDo Wellness Center was also having a busy Friday. The basement-level store began as a medical marijuana dispensary in late 2009 but added recreational cannabis sales to its menu on the first of the year. Since then, according to manager Haley Andrews, about 60 percent of their clientele are visitors to Denver.

"We have people coming from all over the world," she notes -- "not just out of state, but different countries, every single day. And multiple times a day, we have them carrying down their suitcases, because they come straight from the airport." Haley says that while they serve about 50 medical marijuana clients daily, they get anywhere from 300 to 400 recreational cannabis customers each day.

Many of those recreational customers, she said, come to them via foot traffic from the nearly 16th Street Mall. "But people are also doing research before they even come to Colorado," she noted. "They're coming here with the intent of coming to see some place like us. So they go online, they do some research first and they find us."

The LoDo Wellness dispensary has sofas, an Asian-themed décor and a large glass window that looks directly into its on-site grow facility -- all designed to welcome both first-time tourists and veteran cannabis consumers.

"Some places are very sterile, they can kind of feel like a dentist office or something," Haley said. "We have a cozier environment, try and make it a little bit homey and interactive for the customer to come to, so they can feel like it's really a full experience that they're getting."