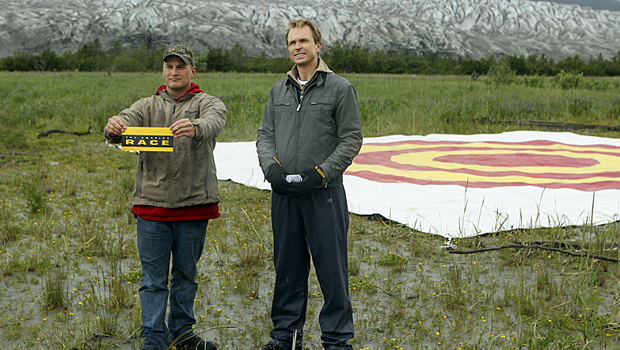 It was down to the final four teams when "The Amazing Race" kicked off its two-hour season finale on Sunday, and after racing through Japan and Alaska it was on to the finish line.

First, teams traveled from Indonesia to Tokyo. Nicole, Travis, Jason and Amy decide to let Tim and Marie into their fold, meaning the three teams would work together and shut out the Afghanimals. The agreement begins to deteriorate almost as soon as they leave the airport, when a disagreement happens over taxis.

Meanwhile, Leo and Jamal – who know they’ll have a Speed Bump to content with after coming in last place the previous week – take a different flight that gets them to Japan about 10 minutes ahead of the other teams.

The Detour gives teams the option to Knock It Down (be a human bowling ball on a Japanese game show and score a strike) or Call It Up (put on a swimsuit and dive into a phone booth filled with water and goldfish, make a call and deliver a message given on the phone).

Teams then encountered a Road Block that required them to assemble a giant model of a robot, but first the Afghanimals have to take on their Speed Bump -- participating in a drill for capturing an escaped rhino (a fake one, don’t worry) at a local zoo.

A roaming vending machine at the city’s gigantic Shibuya crossing held the next clue, which brought teams to the Pit Stop. Tim and Marie arrive first, followed by Jason and Amy and then Nicole and Travis. Leo and Jamal arrive last, and are eliminated (Don't feel too bad for them, though – they were featured in a promo for "The Amazing Race 24: All-Stars," so it appears the Afghanimals will have another shot at racing around the world.)

Next, it’s onto Juneau, Alaska for the finale. Teams race by boat from Douglas Harbor and encounter a Road Block involving dropping a bag of flour onto a target while flying over it in a small plane. Amy gets it on her second try, Marie gets it on her 12th and it takes Nicole a whopping 20 tries to get it right.

They then traveled by helicopter to Norris Glacier, crossing the ice with the help of a guide and searching the ice with a pickaxe for their next clue among false ones that just said “Try Again.”

After that, it was time for the "test-your-knowledge" challenge that always happens during the finale. This time, teams had to assemble totem poles that spelled out the names of the currencies used in each country they stopped in during the Race, and put them in the order in which they traveled there. Tim and Marie almost catch up to Jason and Amy here, but there isn't enough time -- the pair sails through and is off to find Phil Keoghan and the finish line.

So it’s the dating couple from Boston who wins the $1 million prize. Tim and Marie finish second, and Nicole's inability to complete Road Blocks quickly pushes her and her husband to third place. And with that, the 23rd season of “The Amazing Race” is over.

Did the right team win? Are you excited for the "All-Stars" season? Share your thoughts in the comments below.