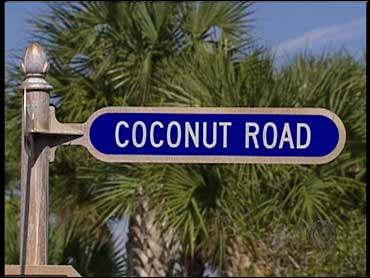 This earmark mystery stretches all the way from the Alaskan tundra to the warm beaches of South Florida.

"Basically, we were given a gift that we didn't want," Estero Council of Community Leaders chairman Don Eslick told CBS News investigative correspondent Sharyl Attkisson. "And it was for the wrong thing."

The "gift" was $10 million tax dollars earmarked from Congress for traffic needs. But not just any traffic need. The money had to be used to connect Coconut Road, a deadend street, with the major Interstate I-75.

The question was why?

A Coconut Road interchange was hardly an urgent priority in the area's traffic plan.

"If one is the least need and ten is the greatest, I would give it a zero," says Lee County commissioner Ray Judah.

Even stranger, the earmark, a grant of money without the normal public review, began as money for badly-needed improvements to I-75. But at the eleventh hour, it was changed to the Coconut Road project by a congressman whose constituents are 5.000 miles away: Don Young of Alaska.

And then in a mistake nobody can explain, it became law without a congressional vote.

Young is infamous for trying to use hundreds of millions of tax dollars to fund a so-called "Bridge to Nowhere." He's under FBI investigation in a separate public corruption case.

He wouldn't agree to an interview but denies any wrongdoing.

According to Eslick, everybody was wondering why a congressman from Alaska was so interested in an interchange in South Florida. He believes the answer lies in a fundraising trip Congressman Young made to the Sunshine State just three weeks before the earmark.

There was a "reception" in his honor at the Coconut Point Hyatt where guests had to pay to get in. Young netted more than $40,000. Among the contributors: A friend and developer.

This developer owns 4,000 acres of prime property where the Coconut Road interchange would be.

The landowner wouldn't agree to an interview. But a spokesman says others in the community wanted the interchange, too.

The way the earmark worked, the money cannot be diverted to the county's actual urgent needs.

So the transit board took a stand.

They voted to send the money back to Washington.

"We rejected the $10 million earmark because we felt it wasn't warranted," says Judah.

It may be a cold day before they turn down that kind of money again. But in South Florida, they're taking the sunny view, hoping Congress will return the money under different conditions for something they actually need.