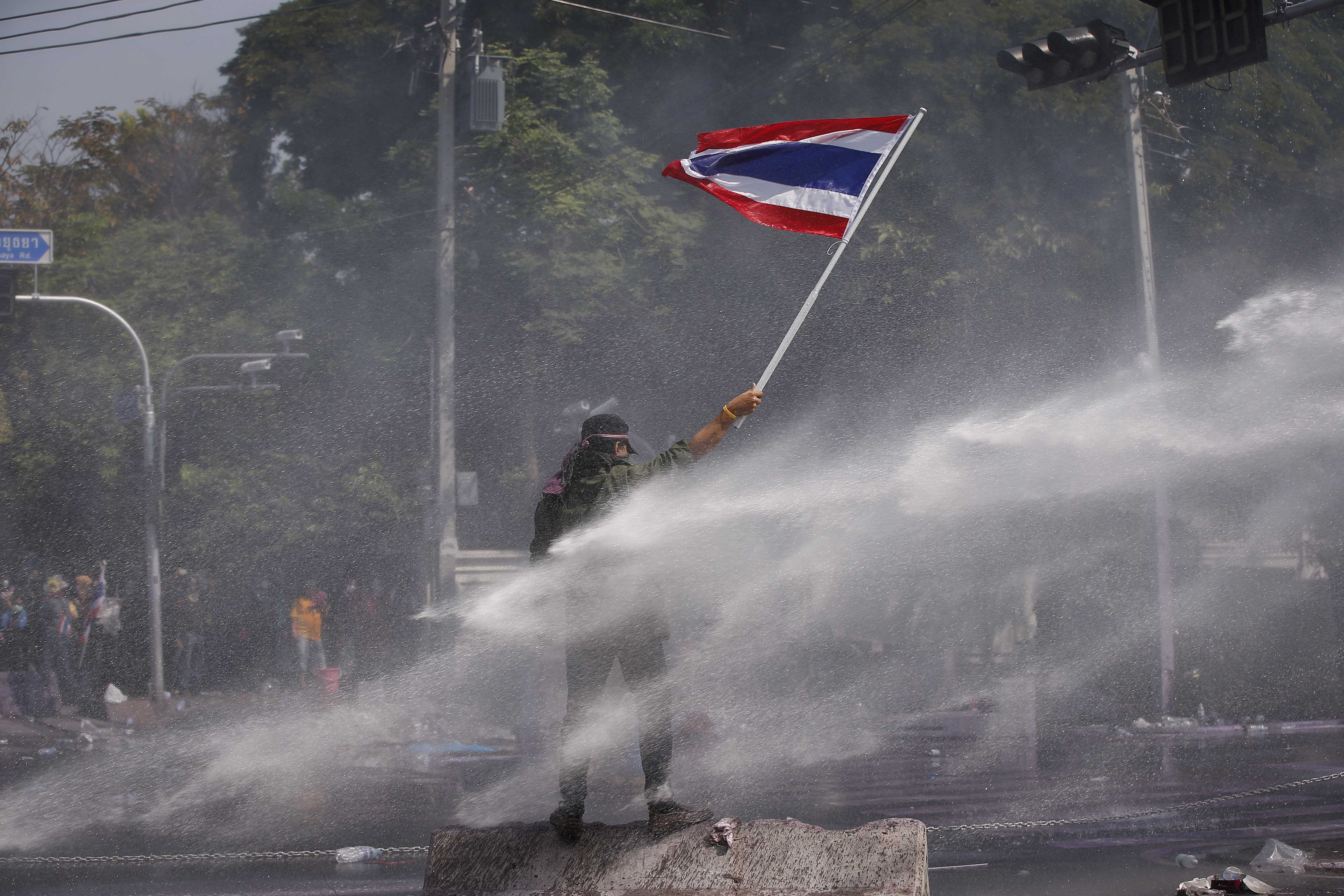 BANGKOK -- Thai police used rubber bullets and water cannons on Monday to try and drive anti-government protesters back from the prime minister’s residential compound, hours after the leader rejected their demands as unacceptable under the constitution.

In a televised news conference Monday, Prime Minister Yingluck Shinawatra said she is willing to "open every door" for negotiations to find a peaceful resolution to the Thailand's biggest political crisis in years, which has led to days of clashes between the protesters and security forces.

But protest leader Suthep Thaugsuban, who met with Yingluck on Sunday night, has said he won't be satisfied with Yingluck's resignation or new elections. Instead, he wants an unelected "people's council" to pick a new prime minister.

"I don't know how we can proceed" with that, she said. "We don't know how to make it happen. Right now we don't see any way to resolve the problem under the constitution," she said in the brief 12-minute news conference.

"If there is any way I can restore peace I am willing to do it. The government does not have to hold on to power. We only want peace."

National security chief Paradorn Pattanathabutr told the Reuters news agency that police were using water cannons, teargas and rubber bullets to try and control the crowd, members of which, he said, were trying to enter the Yingluck’s compound.

“Rubber bullets are being used in one area only and that is the bridge near Government House," said Paradorn.

The protests have renewed fears of prolonged instability in one of Southeast Asia's biggest economies and come just ahead of the peak holiday tourist season.

After a weekend of chaos in pockets of Bangkok, protesters regrouped outside the heavily barricaded prime minister's office compound Monday and repeatedly clashed with the police who fired tear gas, water cannons and rubber bullets.

Emboldened by their leader's vow to topple Yingluck by Wednesday, they threw rocks at police and tore away sections of barbed wire and concrete barriers. At least three people were killed and 103 injured in skirmishes over the weekend.

The protesters, who are mostly middle-class Bangkok supporters of the opposition Democrat Party, want to get rid of Yingluck, claiming she is a proxy for her brother, former Prime Minister Thaksin Shinawatra. He was deposed in a 2006 military coup but remains central to Thailand's political crisis, and is a focal point for the protesters' hatred.

The protesters, who call themselves the People's Democratic Reform Committee, say their goal is to uproot the political machine of Thaksin, who is accused of widespread corruption and abuse of power.

Monday's violence took place around major institutions - the Government House, the Parliament and Metropolitan Police Headquarters in the historic quarter of the capital. The area has some of Bangkok's main tourist attractions such as the Grand Palace, Wat Pho temple, the Bangkok zoo, and the backpacker area of Khao San Road. Most of Bangkok, a city of 10 million, has been unaffected.

Many of the protesters wore raincoats and plastic bags over their heads, to protect against the sting of tear gas.